A demonstrator holds a poster picturing Saudi journalist Jamal Khashoggi and a lightened candle … [+] during a gathering outside the Saudi Arabia consulate in Istanbul, on October 25, 2018.

Change just a few of the names in director Bryan Fogel’s new documentary The Dissident, and you’d have a gripping, edge-of-your-seat Hollywood blockbuster about Middle Eastern intrigue, a hero journalist, and unsavory geopolitics on your hands. The kind of big-screen moneymaker that more than one studio might have even clamored to make and distribute.

Plug in real names, though, and castigate modern-day Saudi Arabia for its connection to the assassination of Washington Post journalist Jamal Khashoggi, and  — well, let’s just say that doing so helped The Dissident earn a cold shoulder from streamers like Netflix NFLX . Something that Fogel is convinced is a direct result of the film’s searing indictment of one of America’s most nettlesome allies.

The 2-hour documentary, which was released through video-on-demand channels like iTunes on Friday, also happens to be chock-a-block with the fodder of John le Carre’s most engrossing spy novels: Exotic locales, journalists and activists hunted by hit squads, government-funded Twitter trolls, ruling families and craven politicians who scramble and stop at nothing to silence dissent and keep the money spigots flowing. It’s all here, even a dose of President Trump for good measure, to ground the film in the unsettling chaos of the here-and-now. Nevertheless, the uphill climb for this movie to get seen is attributable to the fact that, even two years after the murder occurred, powerful interests are still trying to ensure that people forget about this story.

“What transpired out of Sundance was we had a film that received incredible acclaim, was met with standing ovations, Hillary Clinton was at our premier, wrote about it and spoke about it … and we found ourselves without a single offer for global distribution,” Fogel told Forbes in a phone interview a few days before the film’s VOD release. “Clearly, there is a fear and complicity among these media companies that continue to do business with the Saudis and are willing to participate in the silencing of this film through their inaction.”

In Georgia, Trump Says ‘They’re Not Taking This White House’

MSNBC’s Joe Scarborough: ‘Trump Is A Cancer On The Republican Party’

A relevant historical tidbit: Fogel’s last documentary film, Icarus, was picked up by Netflix and earned the streamer an Oscar — so you’d have thought they’d be all over the director’s next project, right?

“I think the Netflix of today is not the Netflix that distributed Icarus,” Fogel continues. “They are a different company, focused on different goals, and subscriber goals international, I think, are key to that. Anything that’s going to rock the apple cart is coming up against a problem.”

None of them, not HBO, Amazon AMZN or any others, decided to touch Fogel’s film that methodically recounts Khashoggi’s death at the hands of a Saudi hit team inside the Saudi consulate in Istanbul back in 2018. Because The Dissident also goes much deeper than that, with help from surveillance video and audio footage, to explore the rot at the heart of the Saudi monarchy — specifically, its all-consuming mania about dissent and outspoken critics. For daring to write in the pages of The Washington Post things like “What the Arab world needs most is free expression,” the most famous Saudi journalist in the world was ambushed, killed, and his body dismembered, presenting the world with a question that still has not been satisfactorily answered to this day: Are some deals with the devil acceptable, no matter the cost?

In the movie, there is a touching moment at the end, during a memorial in Istanbul to mark the one-year anniversary of Khashoggi’s killing. Among the assembled guests is Amazon CEO Jeff Bezos, then the richest man in the world and who also happens to be the owner of the paper that published Khashoggi’s writing in the US (The Washington Post).

Speaking to the crowd, Bezos turns to Khashoggi’s fiancee Hatice Cengiz and tells her that no one should have to endure what she’s gone through. And that she’s not alone. “You are in our heart.” Bezos even tweeted out a photo to mark the occasion of the gathering in the late journalist’s honor:

Months after that event, when she’d begun working with Fogel on this documentary — Cengiz is featured prominently in the latter half and gave heart-wrenching interviews to the filmmakers — she sent a letter to Bezos asking for support. No reply came.

The long arm of the Saudi government and royal family, The Dissident makes clear, remains disturbingly formidable. Take Bezos, for example, who had previously been friendly with Saudi Crown Prince Mohammed bin Salman, who members of the hit squad were connected to. 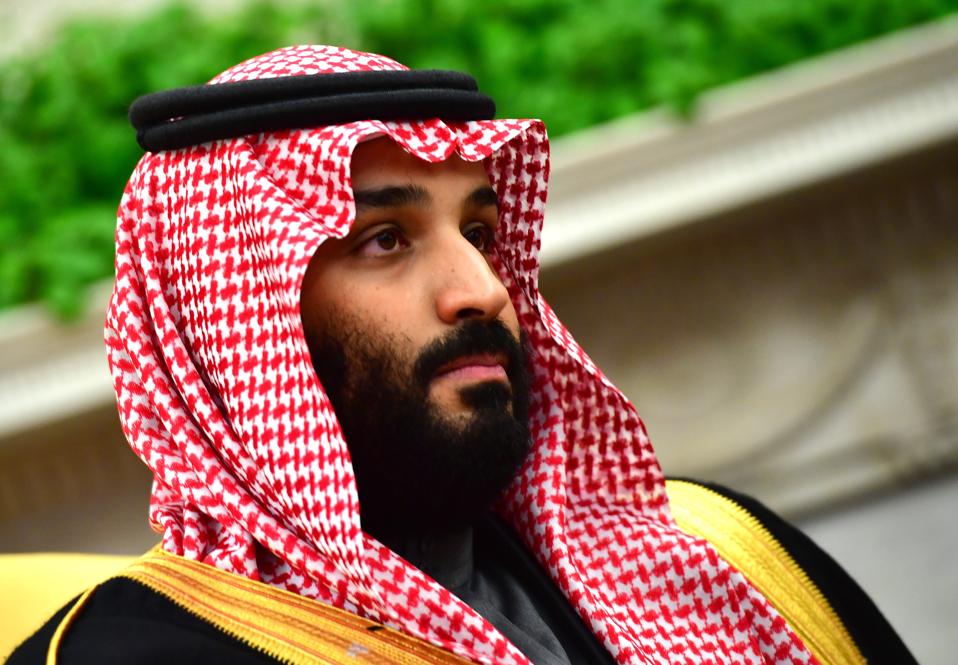 Crown Prince Mohammed bin Salman of Saudi Arabia is seen during a meeting with President Donald … [+] Trump in the Oval Office at the White House on March 20, 2018 in Washington, DC.

When Bezos declined to intervene in the Post’s aggressive reportage in the wake of Khashoggi’s death, the documentary goes on to show how the Crown Prince sent a malware-laced WhatsApp message to Bezos, which hackers then used to access Bezos’ phone and discover that the Amazon chief was having an extramarital affair. Embarrassing photos from Bezos’ phone soon after found their way to the National Enquirer.

The Kingdom can reach anyone, the implied message of this frightening documentary seems to be, from the richest man in the world to a high-profile journalist. Yet, as Republican Kentucky Senator Rand Paul laments at one point in The Dissident, “Are we so blind to the malign influence of Saudi Arabia that we just give money and weapons to anybody, regardless of what they do? You can cut a dissident into pieces with a bone saw, and we’ll still give you weapons?”

Fogel tells Forbes that he’d been looking for a new project like this after his last documentary. “For me, it was just really important that whatever that film was, that it was going to have something that would resonate. That would hopefully shine a light on an otherwise dark corner of the world. And I wanted to see to it that it was a story centered around human rights, freedom of speech, and journalism.

“As the story of Jamal’s disappearance and, ultimately, murder emerged in the first couple weeks that October, my ears perked up immediately. I was in Italy and it was on October 16 (2018) — on the day Saudi Arabia finally admitted Jamal had in fact died inside the consulate, and I had just spoken at the Rome film festival about Icarus. I literally said to myself at that moment, this was the next film I wanted to make. This was it.”

In a statement she emailed to Vanity Fair, Cengiz said that “it was a huge disappointment” to learn that no major streamer picked up the film. “I am sometimes really happy that Jamal never got to see this part of the aftermath. He would be really heartbroken.” Moreover, no actions of any major consequence have been taken in response to his killing. Congress went so far as passing legislation to block $8 billion in arms sales to Saudi Arabia — which President Trump then vetoed in 2019.

“They’re buying hundreds of billions of dollars worth of things from this country,” Trump says at one point in the film. “I’m not going to destroy the economy for our country by being foolish with Saudi Arabia.” At another point, Trump wonders out loud: “It sounded like these could have been rogue killers. Who knows?”

Omar Abdulaziz knows. He’s an activist from Saudi Arabia living in exile in Canada, and he was one of Khashoggi’s closest friends. He started an online talkshow, “Say It And Walk Away,” which is a phrase that Khashoggi used to say — that you should be able to just say your truth, and walk away in freedom. Before the assassination, the two men had been working to create a kind of army of Internet users to push back against the Saudi’s government-funded army of trolls. “In Saudi Arabia,” Abdulaziz explains in The Dissident, “having an opinion is a crime. But Jamal’s death changed everything.”

When you stop and think about it, this is actually as good a time as any for the documentary to finally be released, on demand. The world may have moved on from Khashoggi’s murder — though that won’t be a permanent state of affairs, if Cengiz and others have anything to say about it — but what we’re living through now is more of the same forces that Khashoggi fought against. Autocratic leaders, governments that aren’t straight with their people, and impediments to the free flow of information (needed now more than ever, with the coronavirus pandemic continuing to rage). This was Jamal’s work, his legacy, and it continues today.