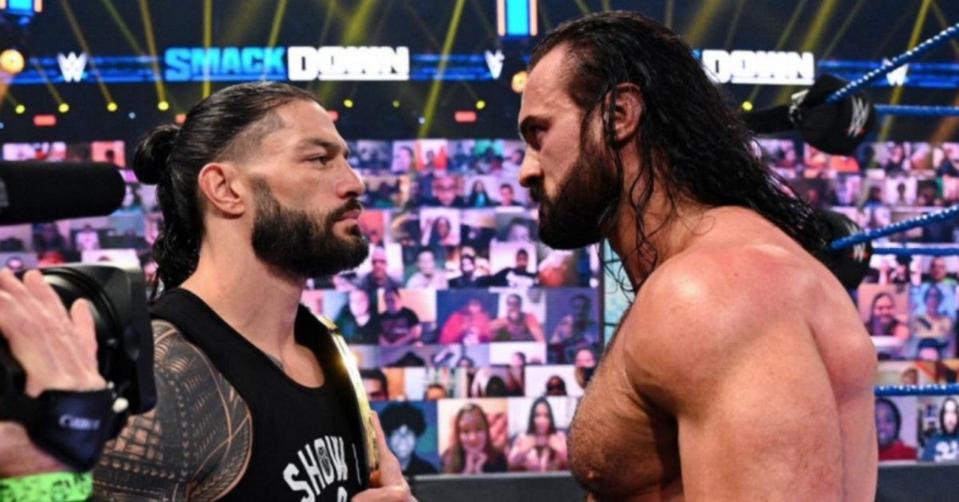 Last week’s broadcast of SmackDown was up with 2.234 million viewers.

Opening Segment with The New Day and The Street Profits

Given how much WWE books black wrestlers in blocks, I’m becoming increasingly suspicious that WWE will move forward with Big E and The Street Profits as The New Day and pray nobody notices.

The New Day walked onto SmackDown with little to no explanation of why they’re on the Blue Brand.

The second Sami Zayn got involved int he opening segment, he had to know he was going to get roasted badly and that’s exactly what happened.

I love all this brand pride that is just now starting to develop days before Survivor Series.

The New Day and The Street Profits have zero negative tension between the four headed into Survivor Series, although they did try their best with an inevitable miscommunication spot between Kofi Kingston and Montez Ford.

Dolph Ziggler was in perfect position to break up the deciding pinfall and couldn’t be bothered to do so.

Daniel Bryan’s last return happened amid a sea of wrestlers in a throwaway segment. This time around, it was done backstage with a mask on. WWE really needs to start giving Daniel Bryan his damn respect.

Sami Zayn made more enemies tonight than just about every heel in WWE currently has. ﻿

The Survivor Series qualifying matches on SmackDown have just become one big game of Musical Chairs with yet another Last-Chance Qualifying Match.

Given how much she loses without Roman Reigns lifting a finger to help her, it’s possible Tamina’s seating assignment is at the end of the table if not under it.

Segments like these, especially with soft-speaking badasses like Roman Reigns and Drew McIntyre, are a blessing because both get to use their inside voices and that’s all they need.

I love WWE piping in crowd heat for Roman Reigns calling Drew McIntyre a secondary champion when, in reality, at lest half of a real crowd would have reacted to that line like it was a well-played roast joke.

They didn’t touch this whole segment, and now I can’t wait for this match on Sunday.

Seth Rollins brought up some sound points about Murphy betraying him despite saving his career. By the end of the promo, Rollins was almost the more sympathetic figure.

I hope Murphy knew that, by dating Aalyah Mysterio, he’d also be essentially dating the entire Mysterio family, who was ringside for this entire match.

Seth Rollins kicked Murphy, as a counter, while folded up between the top and middle turnbuckles. I don’t think I’ve seen anything like that in WWE before.

Tonight would have been a good night for Murphy to debut new ring gear instead of dressing almost identically to Rollins.

After “Eye for an Eye,” I was 100% certain this was the worst feud of 2020. Yet, over the past month or so, it has produced a series of great matches and might have made three new stars (Dominik, Aaliyah & Murphy). How?!

After the biggest win of his career, poor Murphy was almost immediately bumped in favor of “Boss Time.” I don’t think this was a legit time constraint, I think this was a way to protect Seth Rollins from such a big loss.

Sasha Banks and Asuka Face Off Before WWE Survivor Series 2020

Sasha Banks really leaned in to be the de facto heel of this feud.

This segment did wonders for Carmella’s “untouchable” gimmick as Asuka didn’t lay a finger on her throughout her entire beatdown on Sasha Banks.

The announcers treat Jey Uso matches with the same concerned and somber tone they use for Roman Reigns matches.

Jey Uso dominated much of this match, which signaled to me that he was losing.

This match was framed as Daniel Bryan stealing one, the show went off the air teasing Jey Uso facing Roman Reigns, similar to how a student faces a principal.

The Supreme Court will finally rule on controversial US hacking

The best Cyber Monday 2020 deals for working from home