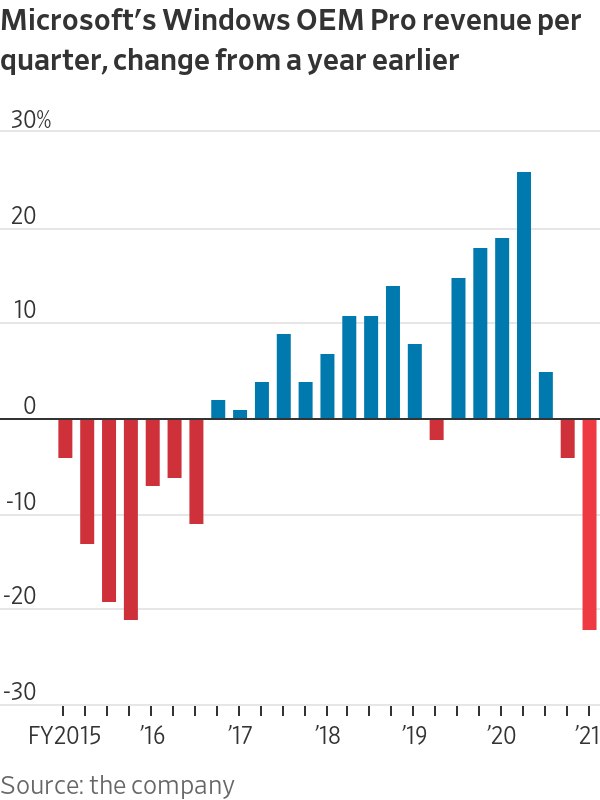 Microsoft
has come a very long way from depending on Windows. But the ubiquitous operating system can still brighten—or darken—the company’s results.

Both effects were actually apparent in the company’s fiscal first-quarter results posted late Tuesday. The cloud business remains the star, and performance there was strong with commercial cloud revenue growing 31% year over year to $15.2 billion, even showing a bit of acceleration from the prior quarter that ended in June. The Windows side of the business was more complicated. Revenue driven by consumer PC purchases saw sharp growth, as did the portion driven by volume licensing of the software. But slumping corporate demand for PCs took a toll. Windows OEM Pro revenue slid 22% year over year—the worst drop since Microsoft began reporting under its new segments in 2015.

Microsoft doesn’t break out specifics, but analysts estimate that Windows OEM revenue—reflecting the sale of both consumer and corporate PCs bundled with the operating system—totaled $13.8 billion in Microsoft’s fiscal year that ended in June, according to Visible Alpha. That’s about 10% of total revenue, though Mark Moerdler of Bernstein estimates that the profit contribution is higher given the high-margin nature of that business.

Windows also played a big role in Microsoft’s disappointing projection for the December quarter, which helped send the stock down more than 3% on Wednesday. The company said it expects 2% on-year growth for its More Personal Computing segment that includes the Windows OEM business, below the 6% growth Wall Street was targeting. Chief Financial Officer Amy Hood said on the company’s conference call that lower corporate PC demand would continue to be a factor, along with difficult comparisons to the prior year, when stragglers gave sales a boost by finally updating from Windows 7, which had reached Microsoft’s end-of-life stage.

As Microsoft continues to shift into a cloud-computing giant, the impact of Windows will continue to lessen. But the operating system still powers more than three-quarters of the world’s computers, according to Statcounter. That makes it still a lucrative business for Microsoft—and at times a high-quality problem.