Demand for goods surged as a result of the Covid-19 crisis. But with Monday’s vaccine news, some of that demand could go away rather suddenly.

One of the many things that has made this recession so unusual is how well goods industries have weathered the tumult while the far larger services sector, which usually holds up OK in downturns, has borne the brunt of the damage. The pandemic led many people to avoid settings such as restaurants and movie theaters while encouraging them to buy things to make their lives a little more livable, such as a new oven, bicycle or videogame console. 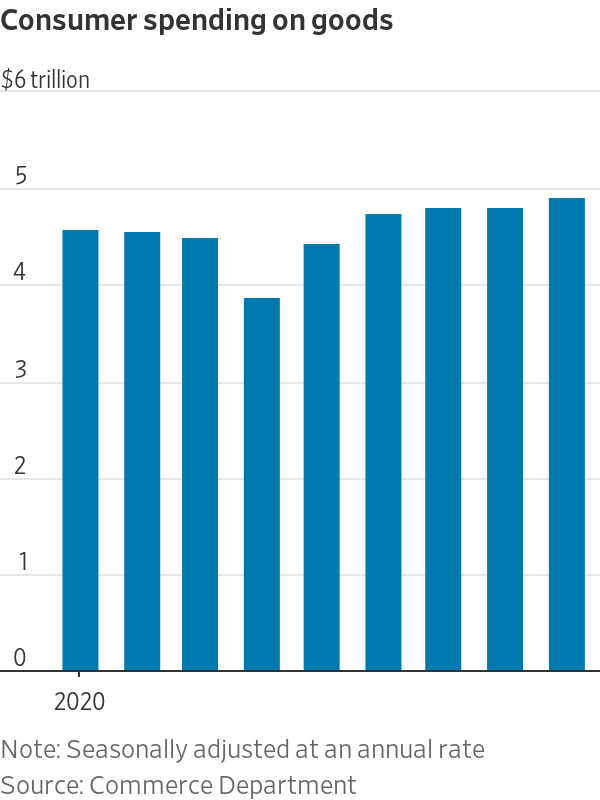 In September, Commerce Department figures show spending on services was 6.3% below its February level, before the crisis struck. Goods spending, on the other hand, rose by 7.7% over the same period. And within that goods category, spending on durable goods—longer-lasting items such as cars and washing machines—increased by 15.6%. Indeed, spending on goods has been so strong that it has more than made up for weakness in the spring, when shutdowns sent sales down sharply. In the seven months since February, durable-goods spending was 0.6% higher than its level over the previous seven months. That compares with a 10.1% decline in services spending over the same period.

The survey of new orders for long-lasting goods contains one of the most closely watched U.S. economic indicators. WSJ explains durable goods, and why investors look beyond the headline number for a better read on business activity. Photo: Josie Norris/The San Antonio Express-News

But with a vaccine on the horizon, some of the demand for goods could ebb. Even though they might not be vaccinated for months, and even though they are still going to have to get through the winter months, some people might decide that getting a new home-entertainment system isn’t as urgent a need as before. The same goes for remodeling their homes, or getting a car to help them escape outdoors. Moreover, after a vaccine is readily available, goods purveyors and makers could find that much demand for their wares was sated during the pandemic, setting them up for an extended period of weakness.

Meanwhile, services businesses have reason to be hopeful, but that hope isn’t going to translate into increased sales just yet. Rather, with Covid-19 cases on the rise throughout the country, many state and local officials are reintroducing restrictions, while households have renewed reason for wariness.

The result could be a lull, with the goods sector experiencing softened demand while the services sector continues to suffer. The vaccine announcement is great news, but it isn’t great news for the economy just yet.

How did the pandemic change your buying habits? Do you expect to revert to pre-pandemic patterns if there is a vaccine? Join the conversation below.