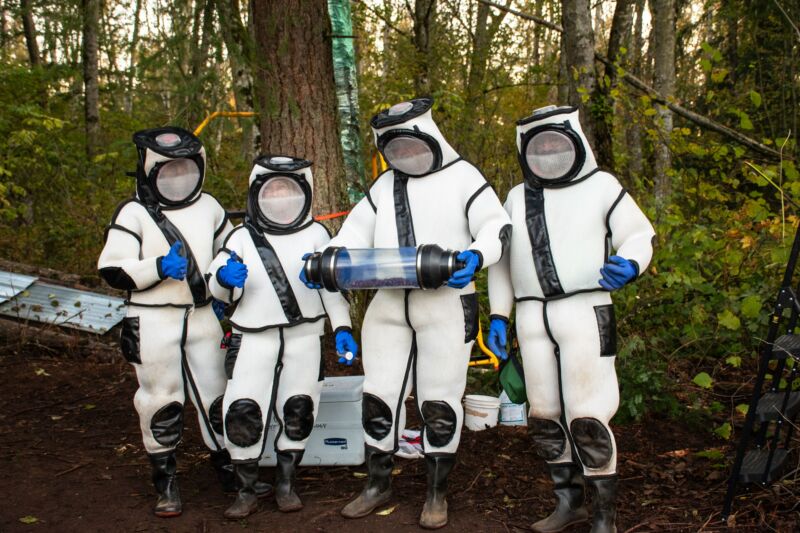 By now you’ve surely seen the pictures: A dozen humanoid forms encased in full-body, white nylon suits are working on scaffolding at the base of a saran-wrapped tree by the red glow of headlamps, one of them raising a plexiglass vacuum tube between its blue-gloved hands in triumph. Inside, 85 wasps, each the size of a human thumb, are piled against one another in cold-induced slumber. No, these weren’t scenes from the next great biothreat thriller. Over the weekend, Washington State Department of Agriculture workers took out the first Asian giant hornet nest found in the United States.

Come to think of it, it was sort of a biothreat thriller. A bit anticlimactic, perhaps. But it had great costumes.

The enormous honeybee-beheading predator, nicknamed the “murder hornet,” was first discovered in Whatcom County late last year. Since then, state entomologists have been working nonstop to track the invasive insect, using traps and radio transmitters in the hope of locating their nests and eradicating them before they can gain a foothold in the Pacific Northwest. But taking out a nest is dangerous work. With a 6-millimeter, automatically-reloading stinger, the hornet can inject massive amounts of venom into its victims. It can also spray that venom from a distance. In Japan, they kill about 50 people every year.

Normal beekeeping outfits won’t cut it. Last year, when a Canadian team tackled an Asian giant hornet nest in Nanaimo, British Columbia, where the hornet first turned up in North America, the person tasked with the extraction wore two pairs of pants as well as a Kevlar vest under his regular apiarist attire. Despite all that, he described the seven stings he suffered as “similar to having red-hot thumb tacks driven into the flesh.” So what’s an Asian giant hornet hunter to do? Head to Amazon, of course.

“Basically, we started this project with a relatively small budget,” says WSDA entomologist Chris Looney, who was charged with leading the Washington hornet eradication. A lot of that money had to go toward the thousands of traps his team ended up laying across the northwestern part of the state this year. “So when someone in our safety office said, ‘Here’s some on Amazon that we can afford,’ we gave it a shot.” 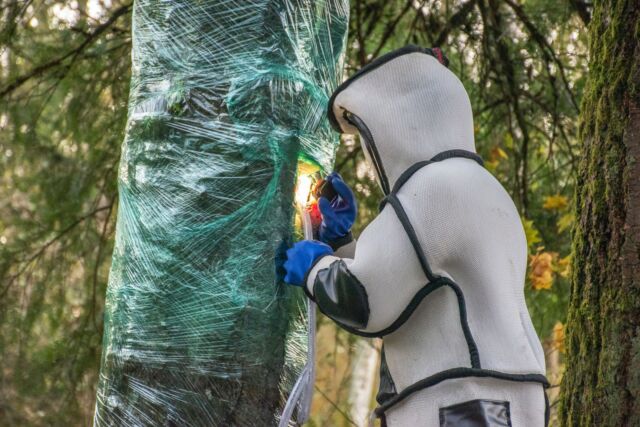 The agency ended up ordering about 15 of the $170 suits, which, according to the Amazon listing, are made by a company called Vevin. They’re advertised as professional anti-wasp, -hornet, and –yellow jacket protective apparel—though not specifically as being protective against Asian giant hornets. The one-piece suits are constructed of three layers: a 20-millimeter-thick slab of foam sandwiched between an inner and outer coating of soft plastic mesh. Black nylon taping reinforces the seams, zipper, and the top of the attached hood, where a battery-powered fan moves air around and keeps the wearer cool. The look can best be described as Michelin-Man-meets-Navy-diver-circa-1945 chic.

But exactly who makes the suit and what they might think about its use for Asian giant hornet wrangling is something of a mystery. The brand name Vevin didn’t yield any hits in a search for a manufacturer’s webpage, and it’s not clear if the suits are actually made by the Chinese company that is selling them on Amazon. WIRED reached out to the seller through the Amazon contact portal, as well as through an email listed on a website that tracks data about Chinese businesses, but received no response. This company doesn’t seem to have a web presence, either. An Amazon spokesperson declined to provide any contact information for either the seller or manufacturer, citing company policy.

The WSDA team purchased the suits in February but didn’t know until last week whether they’d need to use them. After multiple failed attempts this fall to use tracking devices to follow captured wasps back to their nest, on Wednesday, October 21, they finally got a hit. Looney trailed the signal from the tagged insect, following as it grew increasingly stronger. But when it hit max signal, he didn’t see a nest on the ground, which is where Asian giant hornets usually build them. Then the hornet buzzed over his head. Then another one. Looney realized they were coming and going from an opening in an alder tree on what appeared to be private property. About 20 feet away, he spotted a children’s swing set.

That’s one of the reasons WSDA wanted to move so quickly—there were worries the insects might be getting close to people. So it was a good thing they had the suits already on hand. But they hadn’t expected to encounter a nest in a tree, so they needed a few days to get a new plan together. Around 5:30 on Saturday morning, more than a dozen WSDA workers gathered in the property owner’s yard, helping each other into the suits by the red light of their headlamps. (White lights tend to agitate the hornets.) Looney and others had set up scaffolding around the base of the tree earlier in the week, and now his colleagues stood atop it as they crammed dense foam padding into a crevice above and below the nest entrance. Then they wrapped the tree with cellophane, leaving just a small opening. Looney inserted a Shop Vac hose, sucking the insects out of their nest and into a secure container.

In the end, no one on the eradication team suffered any injuries, but Looney can’t give a verdict yet on how swarm-proof the suits are, because the insects simply didn’t try it. Normally, an assault on a nest would provoke the hornets to attack en masse. But on Saturday, the temperatures dipped into the thirties, making the bugs sluggish. And the team’s Shop Vac strategy worked well—no hornets even attempted to sting anyone or squirt venom at them.

Still, Looney says, they did run into a mobility issue the moment they stepped up onto the scaffolding. They discovered they couldn’t raise their arms high enough to reach the top of the nest opening, which was about 10 feet off the ground. “They’re very constraining,” he says of the suits. It’s not so much the thickness of the material as the cut. “If they were designed by a high-level tailor, I’m sure they would move better,” he continues. “But I don’t think they were.”

All that foam might have been hard to move in, but at least it kept people cozy during the five-hour eradication mission, says Looney. Except for one place—the attached rubber boots. They were too small for most people to wear thick socks inside them. “We all had very cold toes,” he says.

Those are lessons the team can take with them for the next time they have to suit up. Though the WSDA was successful in capturing this nest, a series of individual insect captures over the past few weeks indicate that there is at least one—or possibly two or three—more nests elsewhere in Whatcom County. The team will continue to put out traps until the end of November, with the hopes of getting lucky. But their window is rapidly closing. By early December, the nests will start to go dormant for the winter; male and worker hornets will die off, and any queens that have mated will disperse and burrow underground to hibernate until spring, when they’ll form new hives.

“Without a specimen to track back through some of the terrain we’re in, it would be very difficult to locate a nest,” Washington State managing entomologist Sven-Erik Spichinger told reporters on Monday. That means the hornet hunt will almost certainly continue into 2021, at least. But Spichinger says the area where they are believed to have spread is small enough that it’s still worth the battle. No one is calling the Asian giant hornet endemic just yet. “Right now, we’re cautiously optimistic that we’re still ahead of this,” he said. 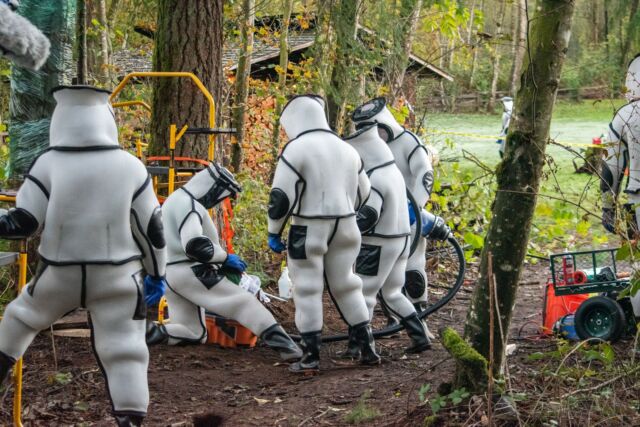 Spichinger emphasized that Washington citizens don’t need to go out and buy anti-hornet apparel. The insects attack only if their nest is disturbed. But if you were thinking Murder Hornet Hunter would make the perfect Halloween costume, you’re right. And you’ll want to act quickly. On Monday, the suits were listed as sold out on Amazon and, according to the shopping site, were discontinued by the manufacturer. Curiously, on Tuesday, a few more suits had been added and the discontinued messaging removed. WIRED was also able to find available units on various Chinese retail sites. But so far, none of them ship to the US.

As for the fate of the captured hornets? All 85 survived the extraction and went back with Looney and into a cooler in his home lab. (The WSDA facilities have been limited because of Covid-19.) He was tasked with freezing most of them to send to research partners around the world who will extract their DNA and study the kinds of pheromones they produce. But before he sentenced them to flash-frozen death, he decided to squeeze in some last-minute experiments of his own. He suspected WSDA’s live traps weren’t as good at keeping the hornets contained as they’d hoped. So he’d pulled out a few different trap designs to see if the bugs could crawl out on their own. “It looks like they’re going to,” he said. And as he chatted on the phone with WIRED on Monday night, Looney realized he had an opportunity to run a second at-home experiment: He could test how well the suit stood up against stings. “It’s out in my car, I could go get it,” he mused. “And I have a bunch of living wasps. I should just try that. Hmm.”

We’ll keep you posted if we ever hear back from him.