Value’s drought isn’t nearly as bad as many have made it out to be.

I am referring to the disappointing performance of value stocks relative to growth stocks. Using the traditional academic definition to differentiate the two types of stock—value stocks have low price-to-book-value ratios, growth stocks have high ones—value has lagged behind growth for nearly 14 years. Over the previous 80 years, in contrast, value far outperformed growth.

Had book value been defined differently so as to include intangible assets, however, as many believe it should, value’s drought would date back just to December 2016, less than four years ago. That’s according to a recent study by Campbell Harvey of Duke University, Juhani Linnainmaa of Dartmouth, and Robert Arnott and Vitali Kalesnik of Research Affiliates.

Had this accounting change been in place, Prof. Harvey says, a lot less ink would have been spilled in recent years wondering if value strategies had stopped working.

Intangibles refer to a company’s investments in things such as research and development, patents and intellectual property. Generally accepted accounting principles (GAAP) treat such investments as an expense rather than an asset on the balance sheet, so instead of being viewed as something that potentially enhances a company’s value, intangibles are treated as something that reduces it. “That makes no sense,” Prof. Harvey says.

What has your experience been with growth vs. value funds? Join the conversation below.

Not treating intangibles as an asset might have made more sense when our economy was dominated by manufacturing and agriculture. But book value without intangibles is increasingly irrelevant in an information-based economy. According to the recent study, “in 1963, intangibles were just 25% of the tangible portion of book value for the U.S. stock market as a whole. By the mid-1970s, that figure had doubled, and by the early 2000s had doubled again. This ratio has remained around 100% ever since.”

Making this situation even worse is that GAAP is inconsistent in its treatment of intangibles. On the one hand, what a company itself spends on intangibles is treated as an expense. On the other hand, if it acquires another firm it gets to add to its book value what that second firm has spent on intangibles.

To explore what difference it would have made had intangibles been included in book value in a consistent way, the authors of this new study undertook the herculean task of recalculating each company’s book value for each year back to 1963. Not surprisingly, for many companies including intangibles made a huge difference. In fact, some companies previously in the growth camp were now seen to be squarely in the value category.

One current example is
Dell Technologies,
which has a negative book value under current accounting rules. That means it is the quintessential growth stock, with a price-to-book-value ratio of infinity. When Dell’s intangible assets are added back into its book value, however, not only does it have a positive net worth, its price-to-book ratio is low enough to make it a value stock, the researchers found. 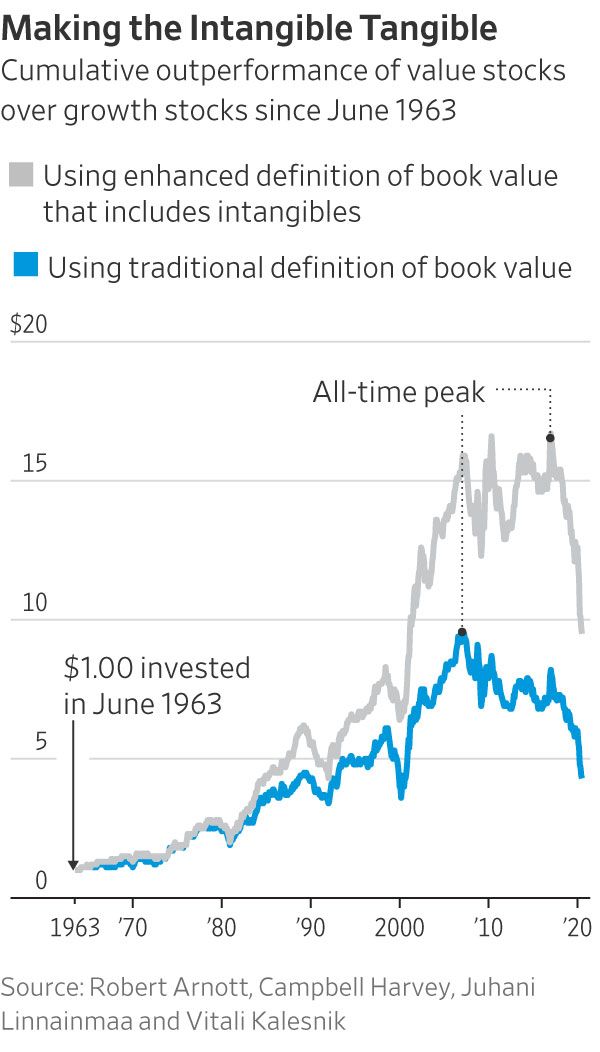 To calculate the marketwide effect of incorporating intangibles in the definition of book value, the researchers segregated stocks into the growth and value categories, using the same procedure as with the traditional definition. For both the original and the new definitions, the researchers calculated the cumulative outperformance of value over growth since mid-1963.

When using the traditional definition, as you can see from the accompanying chart, value hit its peak relative to growth in December 2006. When including intangibles, that peak came in December 2016, 10 years later.

To be sure, since 2016 value has significantly lagged behind growth even when intangibles are included in the calculation of book value. So it would be going too far to argue that the exclusion of intangibles is the only cause of value’s drought in recent years.

So if there is anomaly on Wall Street right now, it’s a bubble among the highest-flying growth stocks. The reasonable conclusion, therefore, isn’t to give up on value but to start taking some money off the growth table, he says.

Mr. Hulbert is a columnist whose Hulbert Ratings tracks investment newsletters that pay a flat fee to be audited. He can be reached at reports@wsj.com.