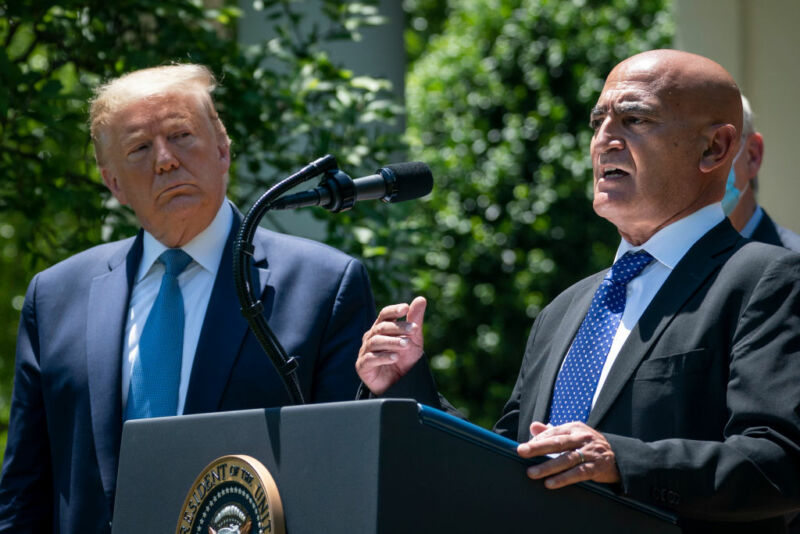 The head of Donald Trump’s flagship vaccine project has called on the White House to allow Operation Warp Speed to make contact with Joe Biden’s transition team, warning that interrupting its work would put thousands of lives at risk.

Moncef Slaoui, a veteran pharmaceuticals executive who was appointed by Mr. Trump to accelerate the hunt for a vaccine, told the Financial Times he wanted to make sure his project continued operating without impediment during the transfer of power.

The comments from Mr. Slaoui, whose project is overseeing the development of five potential vaccines, come as the president faces pressure to concede defeat and allow a transition to the Biden administration to begin.

Mr. Slaoui said: “I hope nothing interferes with [Operation Warp Speed]. It is a matter of life and death for thousands of people. The operation has always been about making vaccines and therapeutics available faster for the country and for the world.”

Asked whether that meant allowing the project to make contact with Mr. Biden’s team, he replied: “I would assume, yes.”

However, Mr. Moncef noted that he could not reach out to the Biden team without a green light from the White House. “It’s not for us to decide, frankly,” he said.

He added: “We’re focused on our objective and we continue the objective. We will deliver the objective, whichever administration asks us to deliver it.”

So far Mr. Trump has refused to allow the General Services Administration to recognize Mr. Biden’s victory in last week’s election—a prerequisite for a formal transition to begin—as the president’s lawyers continue to wage legal battles in swing states around the country.

Pressure is building on Mr. Trump to back down, however, with former national security officials and Republican senators saying this week they want Mr. Biden to receive high-level intelligence briefings.

Mr. Moncef’s intervention comes as the virus continues to spread rampantly in the US, which logged a record 150,526 new cases on Thursday as hospitalizations and deaths continue to climb.

Mr. Trump has been criticized for not doing enough to tackle the pandemic, especially since losing the election last week. He has not met his coronavirus task force for weeks despite the rapid spread of the virus, although on Friday the president announced an afternoon press conference to discuss Operation Warp Speed.

Mr. Slaoui said Mr. Trump had been a supportive leader, adding the president had “fully met” his demand that the project’s work be free of political interference.

And the vaccine tsar, who spent decades at pharma company GSK, hinted that he would stand down soon, adding that he sees his personal role in the “transient mission” drawing to a close now that Pfizer’s vaccine is on the cusp of approval with high hopes for a second from Moderna.

“I would feel that I have achieved most of what I was hoping to achieve, with two vaccines approved . . . and the other vaccines in phase 3 trials,” he said.

Moderna could have its potential Covid-19 vaccine approved at the same time as Pfizer if they produce similar results, Mr. Slaoui said.

Pfizer, with its German partner BioNTech, and Moderna are developing vaccines using a similar technology known as messengerRNA. Moderna said on Wednesday that it had met its target for an interim analysis and is sending the data to an independent data monitoring board for review.

Pfizer became the first vaccine from Operation Warp Speed to unveil its phase 3 clinical trial data earlier in the week, surprising experts with a high efficacy rate of 90 per cent.

Mr. Slaoui said he was “super excited” to the point of speechlessness when Albert Bourla, Pfizer’s chief executive, called him to discuss the results on Monday morning.

Pfizer is the only vaccine manufacturer in Operation Warp Speed that has not taken direct investment from the US government, although it did secure a $1.95bn order that will be fulfilled if the inoculation is approved. Other large pharmaceutical companies including Johnson & Johnson and AstraZeneca have taken direct money to help fund development.

Mr. Slaoui said Pfizer did not need financial support but stressed that Operation Warp Speed had helped it with logistical stumbling blocks such as securing raw materials and equipment and planning the ultra-cold distribution network that will be needed to deliver the heat-sensitive vaccine.