Utilities stocks have been standout performers in the U.S. stock market lately. But not for the reasons that one traditionally might think.

U.S. stocks have been battered by a stretch of turbulence recently, finishing last week with their worst weekly performance since the market rout in March. Given their recent slide—and expectations for more election-induced volatility ahead—a move into utilities stocks, a classic defensive trade, would make sense. In reality, however, the outperformance of companies that provide electricity, water and gas started much earlier, with the sector beginning to outpace many of its peers in September.

Since the S&P 500 set its last record Sept. 2, utilities have climbed 7.7%, while other typical safety sectors, such as consumer staples and health care, have tumbled. Meanwhile, safe-haven assets including gold haven’t seen a surge in demand, either, with the metal finishing Friday with its worst two-month decline since July 2018. 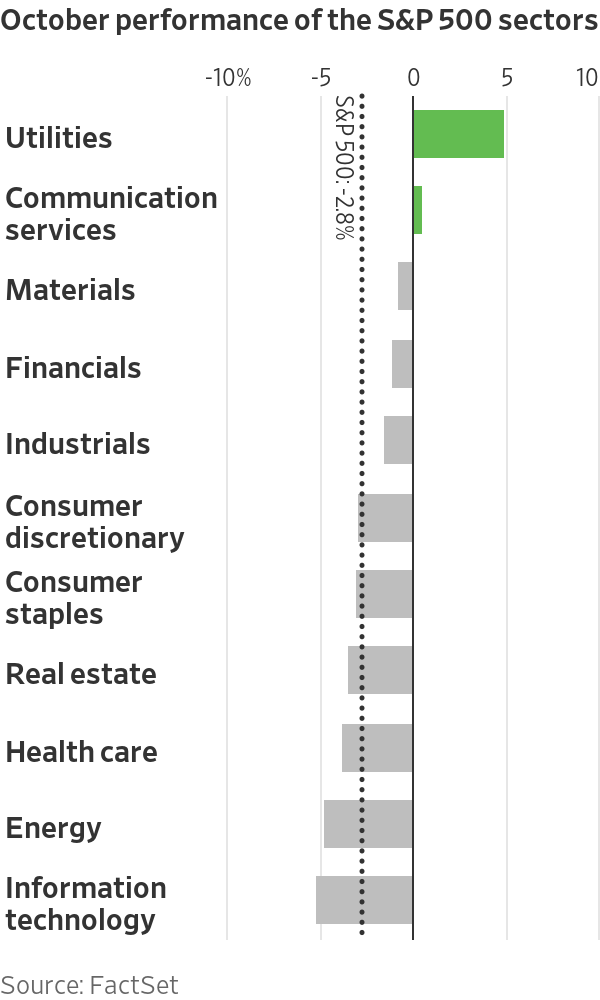 The utilities sector logged the largest gain in the S&P 500 last month, rising 5% as the benchmark index fell 2.8%. It was the first time since January that utilities were the top performer of the S&P 500’s 11 groups, and it came as its other sectors—excluding communication services—tumbled for the month.

The isolated rise in utilities shares underscores how the recent gains in the sector are more than just a move to safety. Instead, investors say they are betting that the group will be a key beneficiary if Democratic candidate Joe Biden wins the presidential race thanks, in part, to his green-energy proposals.

“The lift in utilities recently is not related to the historical dividend, safety-seeking rotation that we’re accustomed to—it’s a new world,” said James McDonald, chief executive officer and chief investment officer of Hercules Investments. “If Biden wins, this sector will power forward.”

Recent gains in the sector have been led by companies including
American Electric Power Co.
,
Duke Energy Corp.
and
Southern Co.
, all of which have risen 12% or more since the Sept. 2 market high. The three companies, which provide electricity and natural gas to millions of customers combined, have said that bigger moves into renewable energy are a priority. 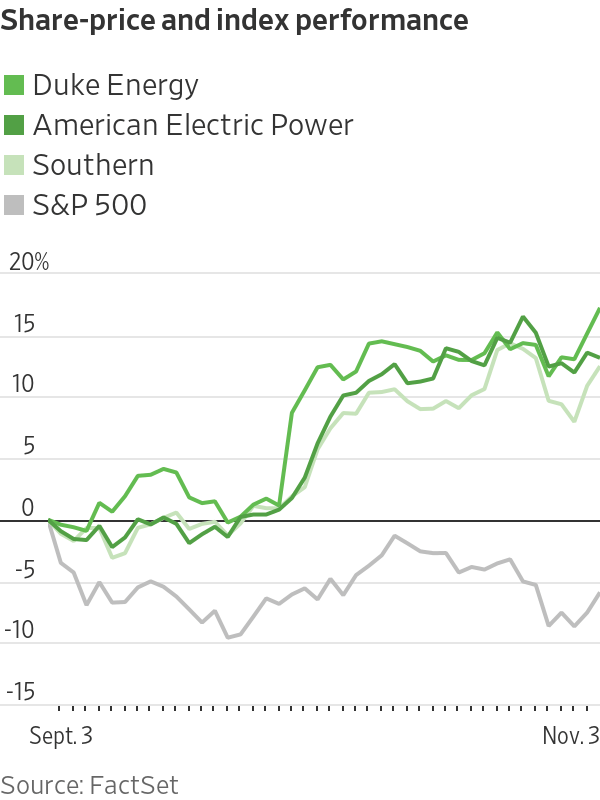 For years, large U.S. utilities have been committing to ambitious goals to reduce carbon emissions as the threat of climate change has become more glaring and as states have increasingly required companies to generate more of their power from renewable sources.

Already, progress is under way: The U.S. in 2019 consumed more renewable energy than coal for the first time in more than 130 years, the U.S. Energy Information Administration said this year.

Yet at the same time, EIA data show, there is still a long way to go. Renewable energy sources such as solar and wind still make up only a small piece of the pie when it comes to U.S. electricity generation, with natural gas still in the lead.

Investors are hopeful that Mr. Biden’s proposed $2 trillion plan to combat climate change, which includes a goal to achieve zero carbon emissions from the grid by 2035, may further juice utilities stocks. Some are anticipating the potential for an infrastructure package that could include broad incentives for clean energy, including the extensions of current tax credits or the creation of new ones, said James Thalacker, managing director at BMO Capital Markets.

“We think that longer-term, this blue wave, if it happens, would definitely benefit the sector,” Mr. Thalacker said, adding that utilities are able to grow their earnings by investing in renewable-energy infrastructure. For many other industries, he said, shifting to renewable energy could come at a cost.

Although a Democratic sweep of the White House and Congress would likely accelerate a clean energy shift, Mr. Thalacker said he remains positive on the space regardless of the election outcome. Despite President Trump’s efforts to revive the coal-power industry, an industrywide focus on shifting to greener energy has continued—in part, Mr. Thalacker said, because of the growing cost-efficiency of renewable energy sources.

Mr. Thalacker points to companies such as
Inc.
as an example of the sector’s progress. NextEra, now the nation’s largest renewable energy company, has had years of rapid growth as it built out wind and solar farms nationwide. The company, which recently made a takeover approach to Duke Energy, is among the best performers in the utilities sector this year, rising 26%. The S&P 500, in comparison, has risen just 4.3%.

“We think the horse has kind of left the barn on climate change and we see this continuing to gain steam in spite of the election,” Mr. Thalacker said.

Although many investors are embracing the possibility of a Democratic sweep, which might increase the likelihood of a more robust fiscal stimulus package, many acknowledge that Mr. Biden’s tax plan could crimp earnings for some companies in the years ahead. Traders and analysts say if Mr. Biden’s proposed increase in the corporate tax rate is achieved, utilities will fare better than other industries.

“For regulated utilities, their income taxes are a pass-through cost to customers,” said Neil Kalton, a senior analyst at Wells Fargo Securities. “If the income-tax rate goes up, that gets reflected in short order on customer bills…it doesn’t impact the bottom line” for the group.

Christopher Harvey, head of equity strategy at Wells Fargo Securities, agreed the utilities space will likely benefit if Mr. Biden is elected. But he also believes the sector’s recent rise is tied to its underperformance since U.S. stocks bottomed this spring. Stocks have charged higher in recent months thanks to fast-growing technology companies: The S&P 500’s information technology segment is up 61% from the March 23 market low. The utilities group, in contrast, has risen 44%.

Utilities have “underperformed greatly [this year] and had a technically oversold position” before the sector’s recent rise, Mr. Harvey said. In late September, he and his team wrestled with the idea of upgrading the sector from neutral to overweight, thinking that the underlying “fundamentals appeared to be quite good” and that election-related volatility might be ahead. Ultimately, however, they decided against it.

“I think we missed the relative bottom, [though] I still think there’s opportunity in the space,” Mr. Harvey said. “We had the right thought at the right time, and we got caught looking.”

Write to Caitlin McCabe at caitlin.mccabe@wsj.com

Expensive homes are being snapped up in Hudson Yards