Uber picked up an Election Day win. California residents voted Tuesday to exempt ride-hailing and food-delivery companies from a state requirement to reclassify drivers as employees. Gig-economy companies plan to use the victory as a model to defend against similar regulation and lobby for national legislation. Uber has still yet to deliver a profit however, posting a decline of 53% in gross bookings for rides in the latest quarter. Uber shares rose 15% Wednesday. 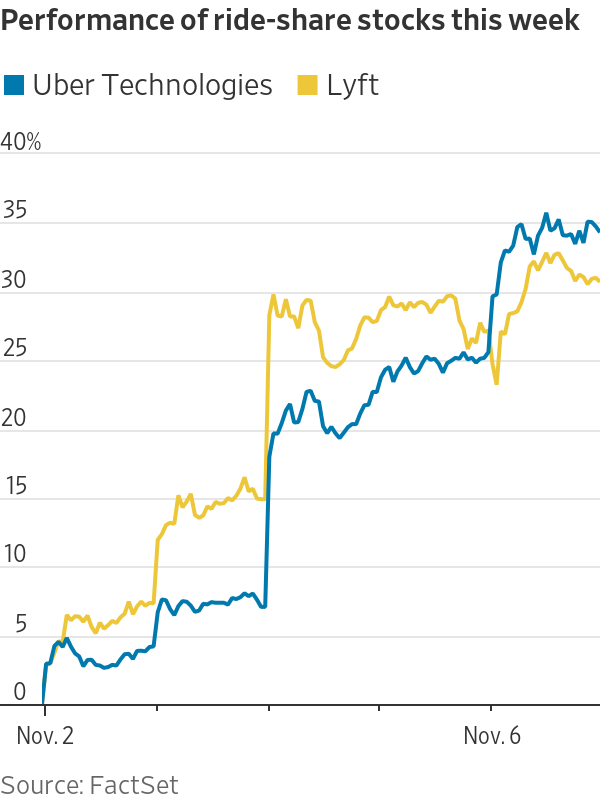 The need to kill coronavirus is giving new life to Clorox’s household unit. The company booked record sales growth in its recent quarter as Covid-19 continues to ravage much of the world. The household-supplies producer said profit doubled to $415 million thanks to a 27% jump in sales, the fastest growth in at least two decades. The company still isn’t meeting the pandemic-driven demand for its namesake disinfecting wipes and sprays and is looking to bolster supply through added production capacity and third-party manufacturers. Executives are planning to use the windfall to expand into new regions and product categories, which could help close the massive gap with rival giants like
Procter & Gamble Co.
and
Reckitt Benckiser Group
PLC. Clorox shares rose 4.2% Monday. 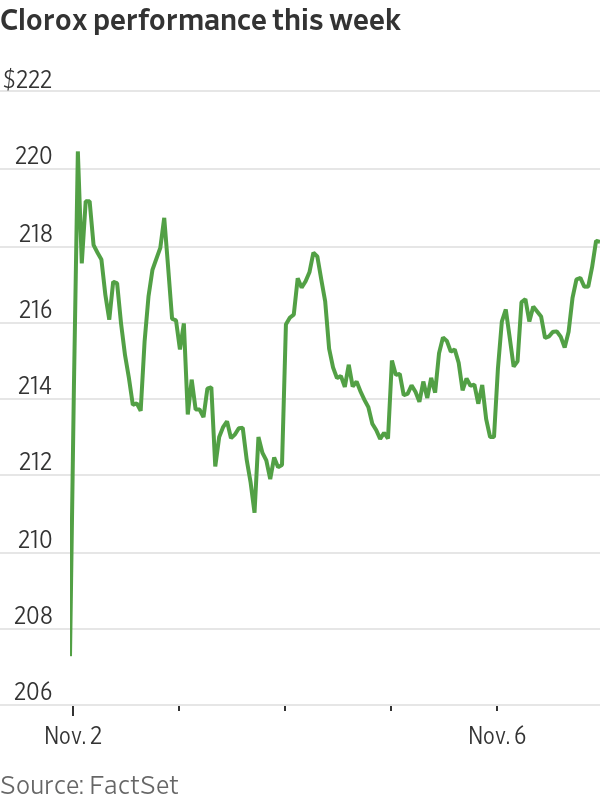 The suspension of Ant Group Co.’s dual IPOs in Shanghai and Hong Kong was a stunning blow to Alibaba and Chinese tech billionaire Jack Ma. The surprise move came after Chinese regulators met Monday with Ant executives and Mr. Ma, the co-founder of both Alibaba and Ant. Alibaba holds a 33% stake in Ant. The turn of events brought a sudden halt to what would have been the world’s biggest initial public offering. The move put a damper on Alibaba’s earnings announcement, which was delivered Thursday and highlighted the increased demand for digital services that’s been spurred by pandemic restrictions. American depositary shares of Alibaba fell 8.1% Tuesday. 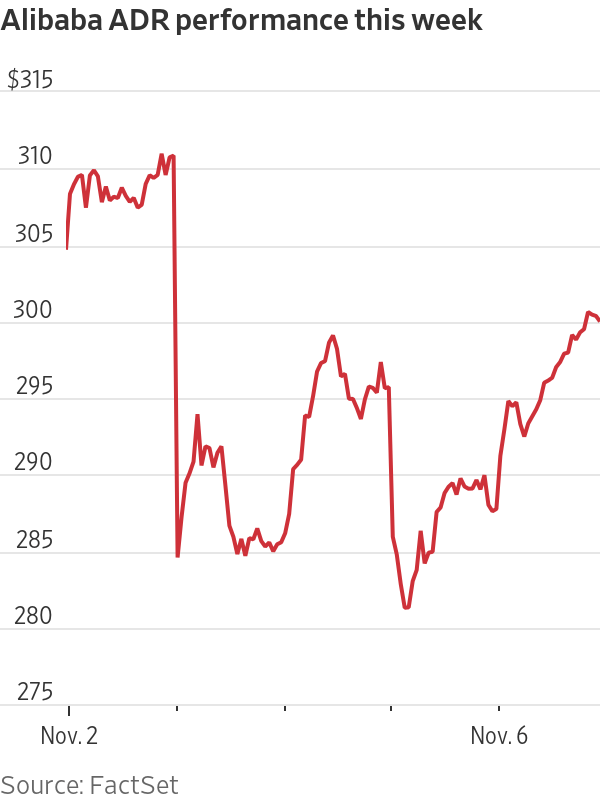 Biogen got a boost thanks to remarks by a U.S. Food and Drug Administration staffer, who gave a positive assessment of Biogen’s experimental Alzheimer’s drug in documents released Wednesday. Approval of the treatment has become increasingly important to the drugmaker as its stable of aging multiple-sclerosis drugs faces increased competition from newer therapies and generic alternatives. A separate FDA reviewer was more critical and cited conflicting evidence for the effectiveness of the drug. If approved, the drug will likely generate billions of dollars in new revenue and provide years of growth for the biotech giant. Biogen shares rose 44% Wednesday. 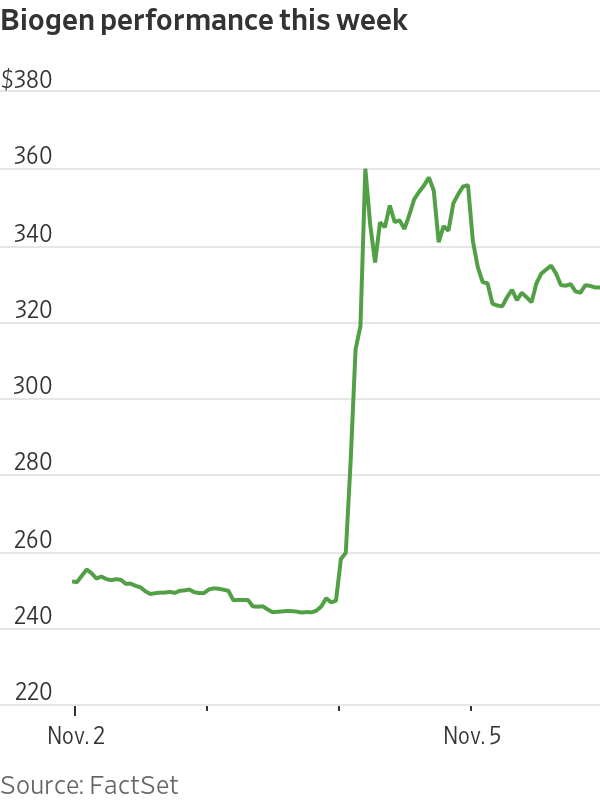 T-Mobile said it would dial up billions in savings next year due to its takeover of rival Sprint. The cellphone carrier delivered strong quarterly results Thursday and said the recent merger with Sprint will yield $1.2 billion of annual savings, more than enough to cover a $200 million federal fine it inherited from Sprint. The company added 689,000 new postpaid phone subscribers in the latest quarter, ahead of rivals
Verizon Communications Inc.
and
AT&T Inc.,
and got a boost to its customer count from remote learning during the pandemic. T-Mobile shares rose 5.4% Friday. 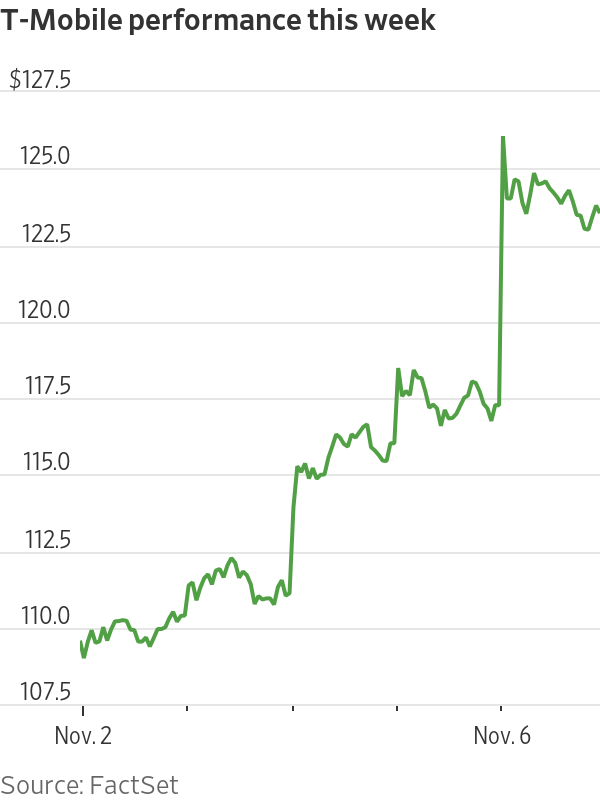 GM is once again firing on all cylinders. The company on Thursday posted a $4 billion profit for the latest quarter, driven by increased production of pickups and a surge in demand for new vehicles that helped the entire industry rebound from pandemic-related losses. Executives cautioned that results could moderate in the fourth quarter, as the number of Covid-19 infections continues to rise, especially in the industry’s Midwest manufacturing base. The still-undecided presidential election could also have big implications for auto makers. GM shares rose 5.4% Thursday. 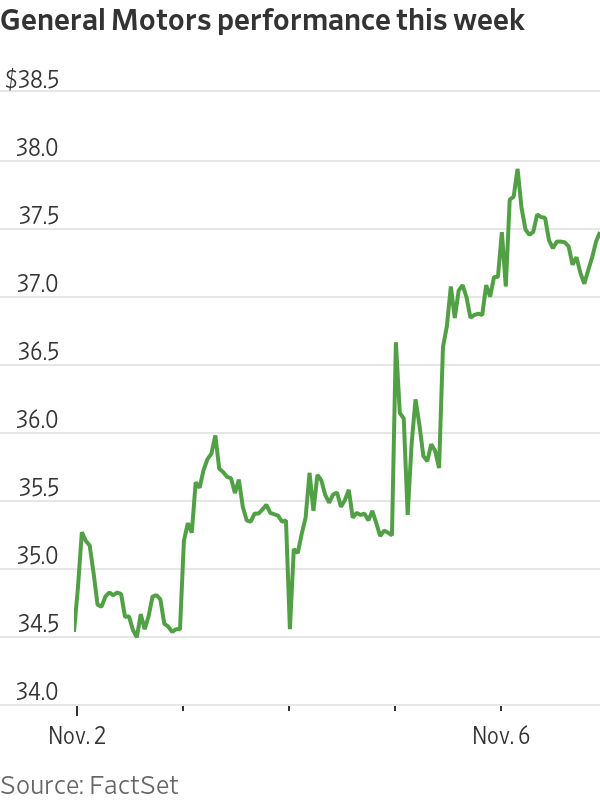 A chip giant is expecting a power surge from 5G. Qualcomm projects that 2021 shipments of 5G smartphones will at least double this year’s expected total—good news for a company that is a leading supplier of the chips that power the new
Apple Inc.
5G phones launched last month, as well as other networking equipment and Internet-of-Things devices. The company said Thursday that revenue jumped 73% in the latest quarter, exceeding Wall Street expectations. Qualcomm shares rose 13% Thursday. 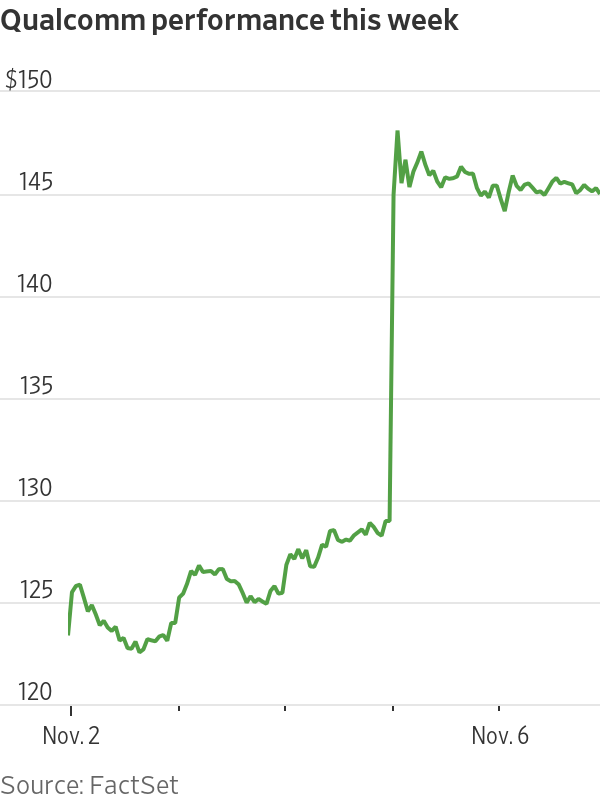