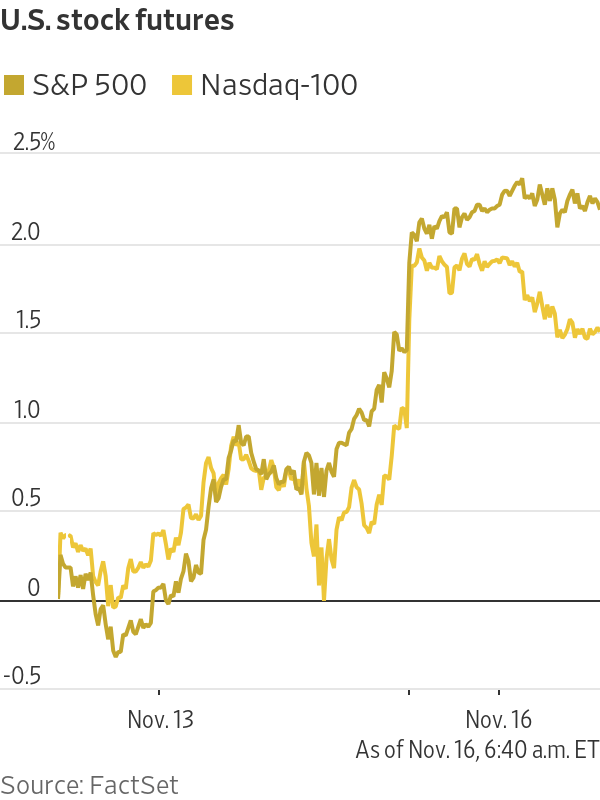 U.S. stock futures rose on positive study results from another potential Covid-19 vaccine, with the S&P 500 set to open higher after ending last week at a record level.

Moderna said its experimental coronavirus vaccine was 94.5% effective at protecting people from Covid-19 in an early look at pivotal study results, the second vaccine to hit a key milestone.

Moderna shares jumped more than 16% in premarket trading. Companies that stand to benefit from the reopening of the economy also climbed, with
United Airlines Holdings
rising 8% and cruise operator Royal Caribbean Group up 7.2%.

Companies that have benefited from stay-at-home orders slipped, with
Zoom Video Communications
down 6.5% premarket and
Peloton Interactive
down 4%.

Investors have recently been buoyed by the prospect of more positive news on coronavirus shots, which could signal a return to greater economic normality. News of a successful trial from
Pfizer
and BioNTech jolted markets last week.

Despite the vaccine news, a rally in stocks could prove choppy as investors work out how long it could take for the economy to benefit from a successful inoculation, said James Athey a senior investment manager at Aberdeen Standard Investments.

“There’s a long way to go between Phase III results and a normal economy,” he said.

Moderna’s results didn’t change the consensus timeline for the rollout of a vaccine, Mr. Athey said. Markets expected a coronavirus vaccine to be approved between year-end and the middle of the first quarter of 2021, and for distribution to certain parts of the population to start before the middle of next year, he said.

Shares in Simon Property Group rose 7.1% in premarket trade after mall developer Taubman Centers agreed to accept a price cut in its takeover by the company. That will allow the two firms to avoid a drawn-out legal battle that was set to start Monday.

The pan-European Stoxx Europe 600 rose 1.3%, led by shares in banks and other sectors hard hit by the pandemic, such as oil and travel.

Shares in Spanish lender
BBVA
rose 18.5% after PNC Financial Services agreed to buy its U.S. arm for $11.6 billion.
Banco de Sabadell
jumped 18.3% on speculation that the sale could make it a BBVA takeover target.

Last week, investors shunned tech stocks that have benefited from consumers spending more time at home, instead favoring companies that would benefit from the reopening of the economy.

“There is a fundamental reason why equities are rising, which is a recovery that seems to be pretty solid, the prospect of more stimulus, and also the vaccine,” said Luca Paolini, chief strategist at Pictet Asset Management.

Though questions remained about the efficacy and distribution of a vaccine, and investors are perhaps overly exuberant in the short term, “for next year, everything seems to be actually moving in the right direction,” Mr. Paolini added.

Health experts say having a vaccine is just one front in a two-front battle against Covid-19. The other is effective treatments for those who are already sick with the disease. WSJ breaks down the three most promising types in development.

The U.S. reported more than a million coronavirus infections for the past week, including more than 133,000 Sunday, as the national total surpassed 11 million. The country also set a record for hospitalizations, with 69,987 reported Sunday, according to the Covid Tracking Project.

Commodities rallied after strong economic data out of China and Japan pointed to healthy demand for industrial metals. Chinese industrial production rose 6.9% in October from a year earlier. Data showed Japan’s economy grew by its fastest pace in 40 years in the third quarter.

Asian stocks benefited from the signing of a major trade deal that includes China, Japan, South Korea and 12 other countries. The regional bloc covers around a third of global economic output.

Putin orders 'large-scale' vaccinations in Russia from next week