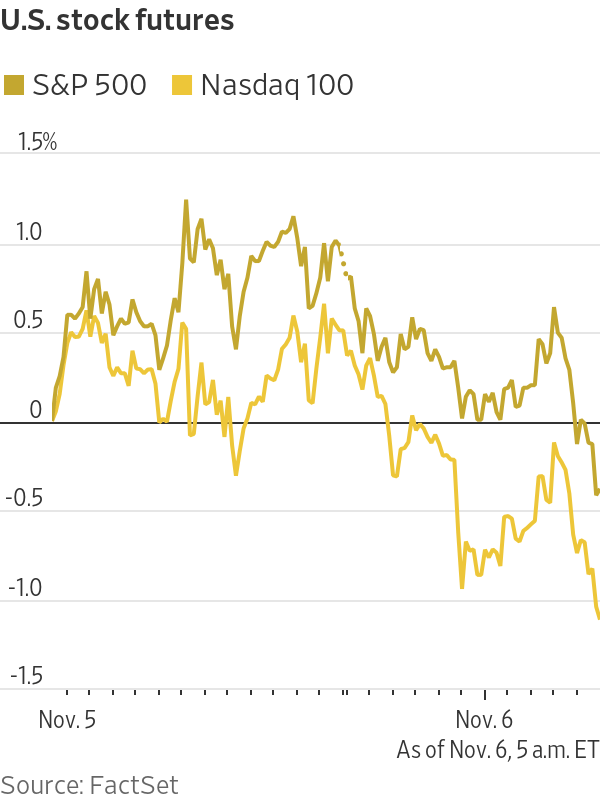 Stocks vaulted higher this week as the prospect of a split Congress reduced the chances of a corporate-tax hike should Democratic candidate Joe Biden win the presidency. Mr. Biden gained a lead over President Trump in Georgia early Friday morning and narrowed the gap in Pennsylvania. He was also leading in Arizona and Nevada, putting him within striking distance of the 270-electoral college votes needed to win the White House.

“I just think it’s a pause for breath,” said Altaf Kassam, head of investment strategy and research for Europe, the Middle East and Africa at State Street Global Advisors.

Mr. Kassam attributed this week’s rally to a “goldilocks scenario,” where a Republican Senate dilutes the power of a Democratic president, limiting his ability to enact tax increases or antitrust regulation against big tech companies. Though he expects the equity rally to continue, it won’t do so at this pace.

The relative weakness of stocks on Friday came a day after the Federal Reserve left policy unchanged, but highlighted rising risks to the economy from the coronavirus pandemic.

“There is a sense of urgency coming from the fact that the second wave, or the U.S. third wave, is becoming definitely much worse than I think we were expecting,” said Luca Paolini, chief strategist at Pictet Asset Management.

The U.S. recorded another record-high day of newly reported coronavirus infections Thursday, with nearly 121,888 infections, according to data compiled by Johns Hopkins University. The tally is 18.5% higher than Wednesday’s 102,831. More than 1,200 deaths were reported on Thursday, according to Johns Hopkins data, a figure not seen since mid-September.

Jobs numbers released at 8:30 a.m. E.T. will shed light on the pace of the U.S. economic recovery. Economists surveyed by The Wall Street Journal forecast Friday’s jobs report to show employers added 530,000 jobs in October. Economists expect the unemployment rate to edge down to 7.7% from 7.9% in September.

Brent crude, the international benchmark for oil, fell 2%. Gold prices crept 0.1% higher, on course to end the week up more than 3.5%.