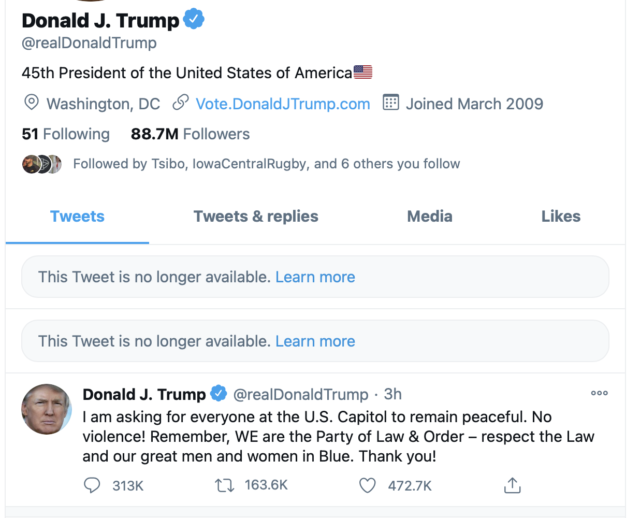 Enlarge / A screenshot of Trump’s account with the two offending tweets removed.

Update, 6:00pm EST: Facebook removed from its platform a short video statement made by President Donald Trump about the violence in the District of Columbia today. In the video, the president told his supporters to “go home now,” while also continuing to offer sympathy to the rioters and repeated the lie that the election was “fraudulent” and “stolen.”

“This is an emergency situation and we are taking appropriate emergency measures, including removing President Trump’s video,” Facebook VP of integrity Guy Rosen said. “We removed it because on balance we believe it contributes to rather than diminishes the risk of ongoing violence.”

YouTube also removed Trump’s video from its service, according to a report from The Verge.

The video was also posted to Twitter, which left it up with a message appended saying, “This claim of election fraud is disputed, and this Tweet can’t be replied to, retweeted, or liked due to a risk of violence.”

Original story 4:35pm EST: A growing chorus of groups and individuals are calling on Twitter to suspend President Donald Trump’s account as a mob of his supporters has stormed and occupied the US Capitol, sending members of Congress fleeing the session during which they were meant to be certifying the results of the 2020 presidential election.

Several groups of Trump supporters planned for weeks to meet in Washington, DC, today for a “Stop the Steal” rally to protest the results of the 2020 election and demand that Trump be found the winner instead of actual President-elect Joe Biden, who won both the popular vote and Electoral College.

Trump spoke to the crowd as Congress convened to begin formally certifying the electoral college votes. In his speech, Trump vowed to “never concede,” adding, “It will never happen. You don’t concede when there’s death involved. Our country has had enough. We will not take it anymore.”

A short time later, rioters stormed the Capitol, resulting in the evacuation of Congress. The situation at the Capitol is very much both ongoing and chaotic at the moment.

While President-elect Biden took to the airwaves in the 3pm EST hour to ask Trump to condemn the violence, Trump himself continues only to speak through Twitter.

At 2:24pm, during the height of the chaos, Trump pinned the blame on Vice President Mike Pence, who Trump repeatedly urged to find a way to invalidate the results of the election. “Mike Pence didn’t have the courage to do what should have been done to protect our Country and our Constitution, giving States a chance to certify a corrected set of facts, not the fraudulent or inaccurate ones which they were asked to previously certify,” Trump wrote. “USA demands the truth!”

Twitter appended a label to the tweet, saying, “This claim of election fraud is disputed, and this Tweet can’t be replied to, retweeted, or liked due to a risk of violence.”

“Extremists must be taken at their word”

The violence, however, was already well underway, and several Twitter users immediately called on company CEO Jack Dorsey to take stronger action against the president’s account.

“Extremists must be taken at their word,” Anti-Defamation League CEO Jonathan Greenblatt said in a written statement. “First there was volatile rhetoric online, then explicit calls to violence and now people are acting on those calls in the nation’s capital and flagrantly breaking the law. It must end now. The President has promoted sedition and incited violence… social media companies should suspend his accounts ASAP as they would do for anyone else advocating disinformation and promoting violence. It’s time.”

Hundreds of Twitter users have been using that platform to echo the call. “Let me say in no uncertain terms [Jack]: If you do not suspend Donald Trump’s Twitter account for the next day at least, this mob attack on Congress is also on you,” New York Times technology reporter Kara Swisher wrote, tagging Dorsey as well as other Twitter Safety executives. “Sorry, but he has incited violence for days, using your tools in large part and you need to act now. This is about public safety and the safety of those trapped in Congress now. He has no part in calming down the mob he incited—this will be up to the police and the National Guard.”

Twitter issued a statement saying, “In regard to the ongoing situation in Washington, DC, Twitter’s Trust & Safety teams are working to protect the public conversation occurring on the service and will take action on any content that violates the Twitter Rules. Let us be clear: Threats of and calls to violence have no place on Twitter, and we will enforce our policies accordingly.”