The White House seems to have again been caught in a fib when it comes to overstating crowd size, after Press Secretary Kayleigh McEnany claimed Saturday that “More than one MILLION” marchers descended on Washington for the “Million MAGA March” in support of President Donald Trump—a claim that many on social media pointed out seemed to be greatly overstated based on actual pictures of the event. 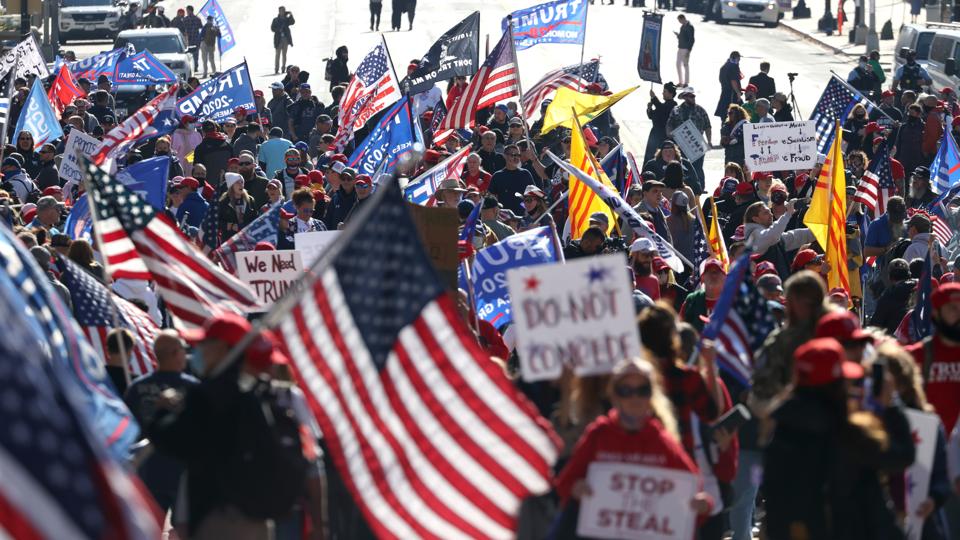 People participate in the “Million MAGA March” from Freedom Plaza to the Supreme Court, on Nov. 14, … [+] 2020 in Washington. (Photo by Tasos Katopodis/Getty Images)

Photos and video appeared to show a crowd of much smaller than one million gathered in Washington for the pro-Trump event, which was organized in response to the president’s repeated false claims of rampant voter fraud in the 2020 presidential election.

Trump himself made an appearance, albeit in a motorcade, waving to the crowd as he went on his way to his private golf club.

The New York Times noted that as Trump passed by, he was greeted by “hundreds” of supporters.

Among the crowd of supporters were members of the Proud Boys, a violent, far-right group that supports Trump.

Many on Twitter couldn’t help but point out that what is likely the last large pro-Trump Washington gathering during his administration appeared to be overstated the same way the very first one was. Nearly four years ago, Sean Spicer, Trump’s original press secretary, falsely claimed that the crowd for Trump’s inauguration was the biggest of all-time, when it was only a modest turnout..

Women for American First planned a “March for Trump” Saturday, going from Freedom Plaza to the Supreme Court. A permit for the march estimated 10,000 people would participate.

Trump has not conceded that he has lost the presidential election, even as he trails President-elect Joe Biden by around 5.5 million votes and he looks poised to lose the Electoral College vote by a count of 306-232—the exact same amount he repeatedly claimed represented a “landslide” 2016 victory over Hillary Clinton. Trump has repeated to press on with false claims of rampant fraud, even as courts around the country continue to reject those claims because he does not have evidence. Those claims seem to have connected with his devoted base of supporters, though.

86%. That’s the percentage of Trump supporters that do not believe Biden legitimately won the election, according to polling from The Economist and YouGov. A similar percentage said Trump should not concede the election.