An affidavit President Donald Trump’s legal team has hailed as proving fraud in the 2020 presidential election has a problem—the fraud it claims to show in Michigan used precinct listings that were actually in the state of Minnesota, in the latest legal gaffe involving the continually failing effort by Trump and his allies to show rampant voter fraud in the presidential election. 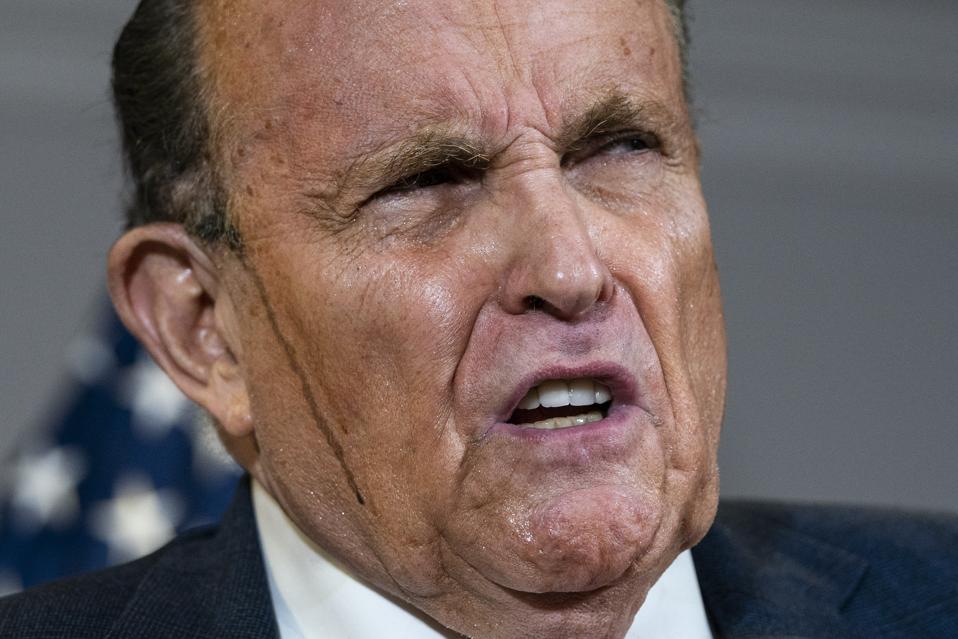 Rudy Giuliani speaks to the press about various lawsuits related to the 2020 election, inside the … [+] Republican National Committee headquarters on Nov. 19, 2020 in Washington. President Donald Trump, who has not been seen publicly in several days, continues to push baseless claims about election fraud and dispute the results of the 2020 United States presidential election. (Photo by Drew Angerer/Getty Images)

The affidavit claimed to use data from the Michigan Secretary of State to show “a statistical anomaly so far outside of every statistical norm as to be virtually impossible.”

Directly below that claim came statistics showing that the Benville Township precinct had a 350% turnout compared with the number of registered voters.

But Benville Township is not in Michigan—it is in Minnesota, and only has an estimated population of 82 people, meaning that if even a handful of voters registered on Election Day itself, which is allowed in Minnesota, that could easily result in a much higher turnout than what was previously on the voter rolls.

The affidavit goes on to list several other tiny townships in Minnesota, some even smaller than Benville.

Details of the document were first widely reported Friday by the pro-Trump Powerline Blog, which called the mixup a “catastrophic error.”

The affidavit was filed as part of a lawsuit that was neither in Minnesota nor Michigan, but in federal court in Georgia. That suit, brought by pro-Trump attorney Lin Wood, sought to discredit the state’s election results by claiming there were problems with the voting system. Like Michigan, Georgia uses the private company Dominion Voting Systems to tabulate election results—a system Trump and his supporters have continued to baselessly claim led to widespread fraud. The affidavit was filed Tuesday, and a judge threw out the case on Thursday, saying that the challenge came too late and “does not have merit.” Georgia also completed a hand recount and audit of its votes on Thursday, confirming President-elect Joe Biden won the state.

Efforts challenging election results have been plagued by what seem to be sloppy errors. Wood’s lawsuit, for example, mentioned voting problems in Mercer County, Georgia, which does not exist. Another suit challenging vote counts in Wayne County, Michigan, was filed in a court that had no jurisdiction over the matter. Meanwhile, Trump’s personal attorney Rudy Giuliani has continued to go on rants in front of the press making unsubstantiated claims of voter fraud, and seemed to forget basic legal concepts during a Pennsylvania hearing.

DO TRUMP’S LAWYERS KNOW WHAT THEY ARE DOING? (Powerline Blog)