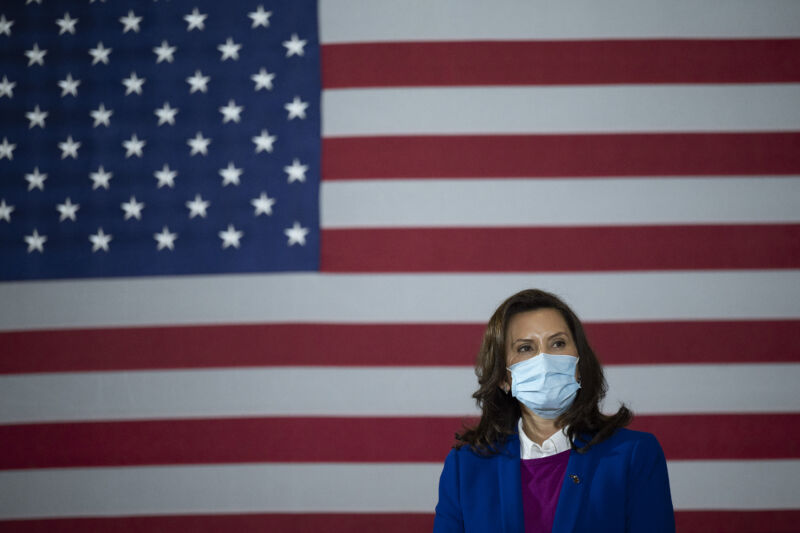 One of the Trump administration’s top coronavirus advisers called for Michigan residents to “rise up” against their state government to resist temporary coronavirus mitigation measures—barely one month after several men were arrested for conspiring to kidnap and assassinate the state’s governor.

Michigan Gov. Gretchen Whitmer’s administration on Sunday issued a new emergency order putting a “pause” on several nonessential businesses and activities for the next three weeks. The order closes casinos and movie theaters, halts in-person dining in bars and restaurants, and requires colleges and high schools to return to all-virtual education, among other limitations. Childcare and schools up through eighth grade can remain open, as can gyms and pools, retail locations, and personal care services such as hair salons. Gatherings of up to 25 people are also permitted outdoors.

“Right now, there are thousands of cases a day, and hundreds of deaths a week in Michigan, and the number is growing,” Whitmer said when announcing the order. “If we don’t act now, thousands more will die, and our hospitals will continue to be overwhelmed. We can get through this together by listening to health experts once again and taking action right now to slow the spread of this deadly virus.”

Scott Atlas, who joined the Trump administration’s COVID response team in August, responded by urging a stop not to the virus, but to the government trying to mitigate its spread. “The only way this stops is if people rise up,” Atlas said in a tweet. “You get what you accept. #FreedomMatters #StepUp.”

Three hours later, after receiving a negative response to his initial tweet, Atlas added, “I NEVER was talking at all about violence. People vote, people peacefully protest. NEVER would I endorce or incite violence.” Atlas did not, however, walk back the idea that people should vigorously fight against any coronavirus-related restrictions.

The violence is already here

The language in Atlas’ tweet would be troubling aimed at any state or federal official, but targeting the Whitmer administration strikes a particular nerve. Federal and state law enforcement on October 8 arrested more than a dozen men on charges related to a plot to kidnap and kill Gov. Whitmer.

Eight of the men who were arrested as part of that alleged conspiracy had attended previous demonstrations against the Whitmer administration’s anti-COVID measures, including a heavily armed demonstration inside the Michigan capitol building in April. Rhetoric from the Trump administration has made the threats of violence worse.

“Every time the president ramps up this violent rhetoric, every time he fires up Twitter to launch another broadside against me, my family and I see a surge of vicious attacks sent our way,” Whitmer wrote in an essay in The Atlantic. The same seems likely to follow such rhetoric from other members of the administration as well.

“We know that the White House likes to single us out here in Michigan, me out in particular,” Whitmer told CNN late Sunday. “I’m not going to be bullied into not following reputable scientists and medical professionals.”

In addition to the frightening implications of violence, Atlas’ call to fight COVID-19 countermeasures comes exactly when the United States needs those measures more than ever.

The country is in the midst of a dramatic surge of cases in almost every state. Just one week ago, the US crossed the 10 million-case threshold; today, that number already exceeds 11 million and is continuing to rise.

The Midwest region is being particularly hard hit at the moment, and Michigan is no exception. According to data compiled by The New York Times, the number of reported cases, COVID-related hospitalizations, and COVID-related deaths have all more than doubled over the past two weeks, and hospitals in several states are already at capacity. Taking steps to reduce the spread of the coronavirus should be common sense at this point.

Unfortunately, this sort of anti-science stance is par for the course for Atlas, who joined the Trump team this summer as the “anti-Dr. Fauci.”

In August, he advocated for simply letting the virus run rampant to generate “herd immunity,” a plan that amounts to giving up and letting hundreds of thousands of people die. The White House endorsed that position in October.

Michigan Attorney General Dana Nessel said Atlas’ “rise up” statement is “disappointing, irresponsible, and the reason why the United States finds itself in such desperate circumstances regarding COVID-19.” Nessel added, “COVID-19 is the enemy, not each other. Stop pitting Americans against each other and start supporting policies proven to effectively fight the virus.”