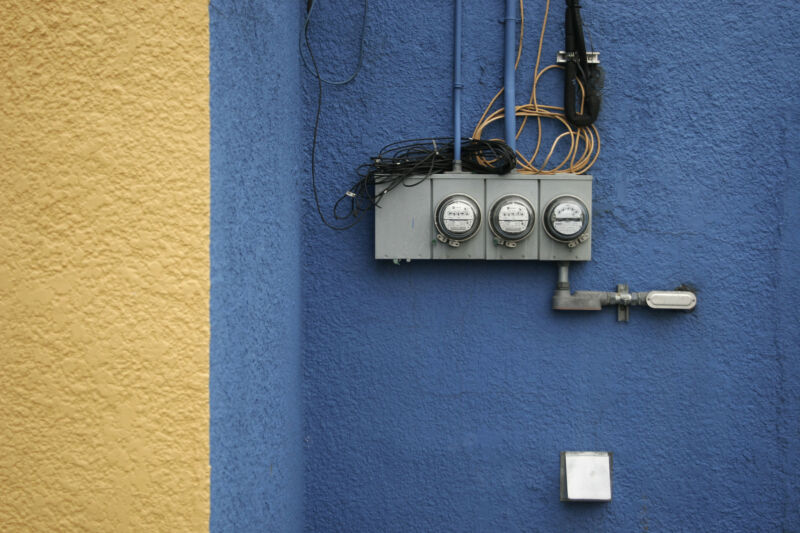 For a home or business, the economics of installing battery storage are often challenging. While falling costs are gradually improving one end of the equation, a new study led by Stefan Englberger at the Technical University of Munich highlights the other side of the balance—optimizing the financial benefits.

Batteries are typically installed for one specific purpose. It could be to enable greater self-consumption of electricity generated by your own solar panels, for example, reducing purchases from the grid overnight. It could be to enable you to avoid purchasing power during peak times, when time-of-use pricing goes up. Or you could use the battery to smooth over outages on an unreliable grid. These strategies leave the battery “idle” for portions of the day—for comparison, imagine purchasing a taxi but only running it in the mornings. Having another driver operate it in the afternoon would put extra miles on the vehicle, but it would also pay back your investment faster.

The researchers set out to simulate a way to increase the utilization of batteries. Using the battery to provide multiple services could optimize the income generated, though this would of course have to be balanced against the faster degradation of the battery. But there’s a large hurdle to clear before this balance matters, the researchers say. That’s because regulations require “behind-the-meter” battery functions to be separable from “in-front-of-the-meter” functions that serve the grid rather than the battery’s owner.

If you separate those functions into separate batteries, or even with fixed shares of one battery, you’re basically back to the underutilization problem again. Instead, the researchers propose that the requirements could be met by a smart battery-management system that virtually partitions battery capacity for a set increment of time. That way, the system is able to provide a given slice of capacity to the grid and promise that any behind-the-meter use won’t compete.

To investigate how these might work out, the researchers simulate a 1.34 megawatt-hour/1.25 megawatt lithium-ion battery for a commercial property in Germany. They consider four potential functions: increased self-consumption, peak-shaving of demand, frequency regulation for the grid, and spot-market trading (charging when prices are low and selling electricity to the grid when prices are high).

In each case, they work out the economic potential of each function alone, as well as different combinations. They also track degradation of the battery’s capacity through cycling and the passage of time. For example, doing peak-shaving alone would generate about 43 euros per kilowatt-hour each year, with the battery lasting 15 years before dropping to 80 percent capacity. Combining peak-shaving with spot-market trading pushes profits up to speed 261 euros per kilowatt-hour each year, but it reduces lifetime to about eight years.

In the end, the optimal combination appeared to be peak-shaving, frequency regulation, and some spot-market trading. The nice thing about frequency shaving is that it involves minimal (but fluctuating) changes in charge level, which results in less degradation than deep cycling would. Spot-market trading can result in lots of cycling, though, so the algorithm here would limit usage to only the most profitable exchanges. 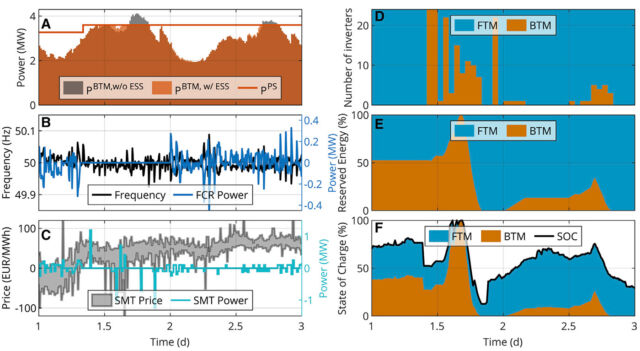 Enlarge / A couple of simulated days of operation with peak shaving, frequency regulation, and spot-market trading (left). Colors on the right show how the battery is partitioned between grid (FTM) and consumer behind-the-meter (BTM) functions.
Englberger et al./CE

This particular combination involves relatively little competition between functions, such that each retains at least 84 percent of its sole-use profit potential. The battery’s lifetime is reduced, but the added profit more than makes up for it. The return on investment is greatest in this scenario, although other combinations also beat all single-function scenarios.

There could be a sustainability angle to consider here, as you’re burning through the battery’s life faster to extract more financial value. But you’d need a systemwide perspective to evaluate that—the shorter lifespan may be offset by a more efficient use of each battery.

Sticking with the economics, the researchers point out that utilities and regulators could make it easier to operate batteries this way, which would in turn encourage more investments.

“Policy makers interested in accelerating energy storage deployment to facilitate a sustainable energy system transformation should note that multi-use operation has the potential to substitute the need for costly deployment subsidies,” they write. It’s not often you can subsidize something for free.