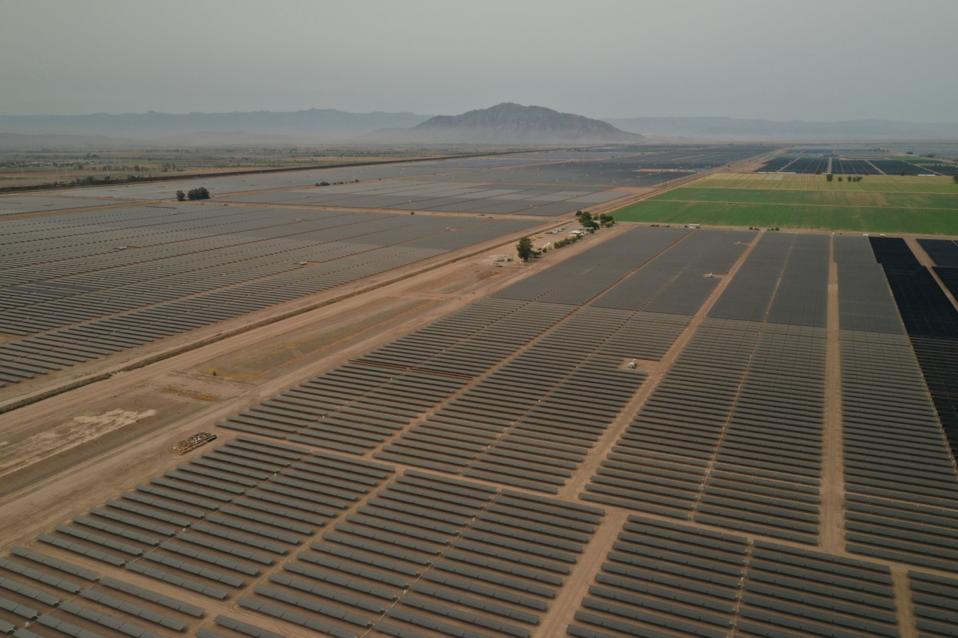 If America and the rest of the world are truly going to achieve the “energy transition” from fossil fuels to renewable energy sources in the coming decades, it will be important to excise the scams from the system. One of the most-abused scams to come along in the energy space during this century is the Renewable Energy Credits (REC) shell game.

You have probably recently turned on your television and seen an ad for Amazon AMZN or some other company claiming to go “100% renewable” by a given date. But the truth behind that is that is most often simply not possible in the context of America’s current electricity grid. Claims by companies and other entities that they are 100% renewable are often deceptive to consumers and the public, given that many, if not most of these companies are simply buying green credits from brokers. Not only does the public not know this but there is no real oversight process in place for buying and selling these credits.

When companies make these claims and push for 100% renewable energy, it results in deceptively building momentum for the sentiment of the Green New Deal while doing nothing to help create a new reality that would actually support the end goals of that Democrat policy effort. At the end of the day these claims just increase more federal taxpayer subsidies for a counterproductive scam that in turn inhibits true growth in the renewable energy sector by robbing it of needed capital.

This scam isn’t just happening within companies: It’s happening in cities with their own utilities like Georgetown, Texas, and at universities like California’s UC-Santa Cruz. Students at that university felt so strongly about the need to reduce greenhouse gas emissions that they voted in 2006 to actually raise their own tuition bills to fund the purchase of $100,000 worth of RECs in the belief their school would be purchasing electricity generated solely by wind and solar power.

But in fact, the school continued to simply purchase electricity from California public utilities who derive most of their power generation via natural gas power plants. The money from the RECs is supposed to go back into the system to help spur growth of renewable energy sources, but the cost of them is so low that they end up barely covering the salaries of the brokers who negotiate their prices. In the end, the students at UC-Santa Cruz became so disenchanted with the results of their investment that they are now in the process of cancelling their REC contracts.

Britain Will Ban Gasoline Cars In 2030. Why Are Experts Not Impressed?

The experience of the City of Georgetown, Texas, is another prime example of feel-good green messaging not matching up to the reality of the transaction being entered into. Georgetown made a big media splash in 2016 – helped along by praise from Al Gore – when its city leaders announced that their city-owned utility would henceforth use only electricity that would be 100% generated by renewable sources, which in Texas means mostly wind power.

The city entered into long-term, fixed price agreements to purchase electricity supposedly supplied solely by wind and solar power. But a drop in natural gas prices and in the cost to generate wind power in the state left the city’s rate-paying customers holding the bag to the tune of about $7 million per year. Even worse, the contracts obligate the city to purchase about twice as much power from two renewable power facilities than it really needs, exacerbating the cost to consumers. The plan was for the city to be able to sell the excess capacity back into the state’s power grid, but the realities of the market caused those sales come at a loss.

To its credit, Georgetown at least adopted a plan that involved real, true investments in renewable energy capacity development instead of taking the easy, PR-friendly way out of simply purchasing RECs. The same is true of oil and gas companies like BP, Shell and ExxonMobil XOM who, when promoting their plans to become carbon neutral by some year certain are able to simultaneously point to real investments involving hundreds of millions of dollars in real renewable energy projects that they themselves plan to develop.

If America and the world are ever to really achieve the much-ballyhooed “energy transition,” leaders at companies and governments at all levels will have to forego the easy reach for the low-hanging fruit of buying and selling RECs and resolve to do the much harder work of making real investments in new renewable capacity and efforts to properly integrate that capacity into the overall grid. At the same time, the EPA, which currently mandates and subsidizes the use of RECs in a variety of situations, must also change its focus.

America can either promote a real energy transition that involves a lot of investment, planning and hard word, or a false one that changes little but makes people feel good. It can’t do both.

Carter Page files $75M suit against FBI, DOJ, others over