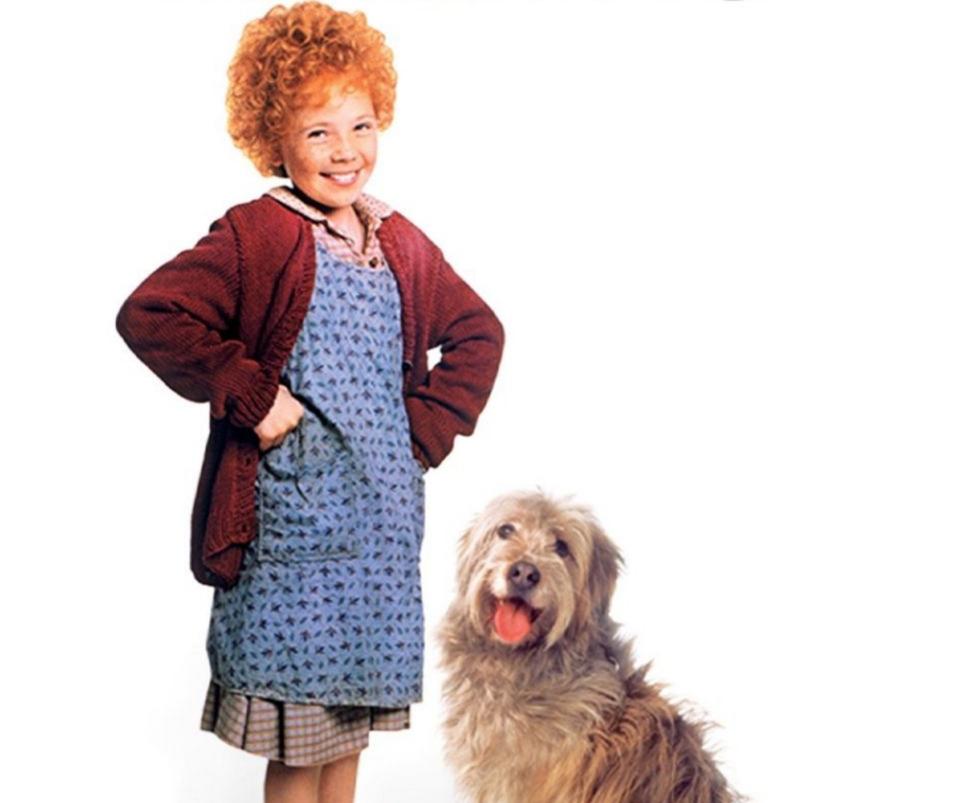 ‘Annie’ returns to theaters for a limited time almost 40 years after it was first released.

It’s been almost 40 years since Annie first graced the big screen, but it’s returning to theaters for a limited time around Thanksgiving.

The 1982 musical dramedy, about an orphan taken in by billionaire Daddy Warbucks but dreams of meeting her birth family, was nominated for two Oscars. Directed by John Huston, the cast boasts a plethora of legends, including Carol Burnett and Tim Curry.

So, how has Annie, now considered a classic, managed to stand the test of time?

“I think it was well cast and directed, it’s a wonderful, timeless story and Aileen Quinn was the perfect Annie,” enthused Burnett, who played orphanage manager Miss Hannigan. “It’s about love, it’s exciting, it’s a fairytale, and it’s a little scary too, so it has it all. Plus, I think it comes across that we all had so much fun doing it. The most fun was the working with Tim Curry, who played Rooster, and Bernadette Peters, who played Lily St. Regis.”

Burnett, who was already firm friends with Peters as she was a regular on The Carol Burnett Show, added, “The chemistry was there right from the beginning, and John was very good about letting us go with it. He believed that you hire a person because of what they can bring to the movie, so you don’t try to tell them how to do it. Annie was shot very quickly. I don’t think we did more than two takes for a scene. He knew what he wanted and would say, ‘Okay, we’ll move on now.’ That was terrific because that’s the way I like to work.

One of Annie‘s most iconic moments is the musical number Easy Street, which has Peterson, Curry, and Burnett front and center. However, the final version we see in the movie is not the first one that was filmed.

“I’ve never seen the finished version of that scene, but it was huge,” Curry recalled. “I don’t know if it exists or where it is. I remember there were 150 dancers. There were stunts. It was an astonishing number.”

Burnett added, “In original Broadway show, it was just the three villains in the orphanage who sang Easy Street. This being Hollywood, they wanted to open it up and make it this huge musical extravaganza, and we went out on the street itself and danced and sang and ran up and down fire escapes, and there was even an organ grinder with a monkey. That had nothing to do with the fact that we’re going to be on Easy Street. We found that half of a locket that belonged to Annie’s parents, and then suddenly, the plot went out of the window. It was total overkill. Bernadette and Tim and I were like, ‘Well, we just have to go with it.'”

Curry added, “I remember turning to Bernadette and saying, ‘This may well be the last big movie musical.’ That was a distinct possibility, and, pretty much, it was. Hollywood rarely makes a musical of this kind, and on this scale these days, and that’s a shame. At the time, there was a lot of criticism about how much the movie cost. It would be a drop in the ocean these days.”

And the show wasn’t over yet, as Burnett explained.

“It took a week or so to shoot, and that number cost over a million dollars to shoot. That was a lot of money at that time. So we wrapped the movie, and I went back to Hawaii where I was living, Bernadette flew back to New York, and Tim went to London,” the actor said. “I guess they looked at it and realized that it didn’t work, but we already knew that. So, about a month later, I got a call from the film’s producer, Ray Stark, and he said, ‘We’re going to reshoot the Easy Street number with just the three of you in the orphanage.’ That was terrific news and the way it should have been in the first place. It was so much better with just the three villains.” 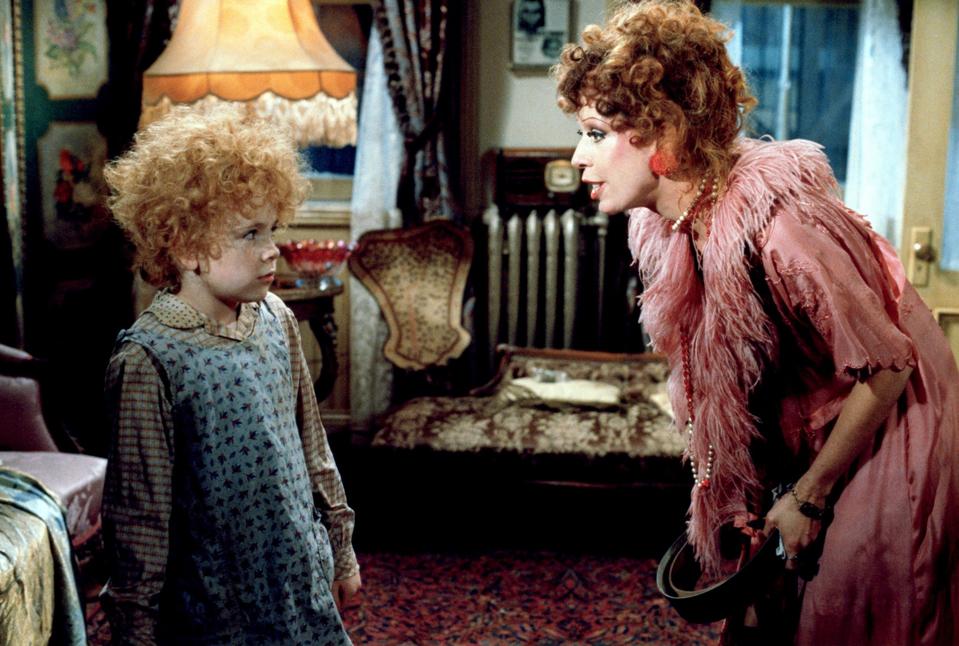 Playing villains was something both Curry and Burnett both relished.

“Rooster was a hustler, and people love that kind of character,” Curry added. “He was a lot of fun. I approached it very much in my way, but the three of us were very close. We were like The Three Musketeers. Carol is, of course, a legend and probably the funniest woman alive.”

“When I met with the director, John Huston, I told him that I was going to borrow the physical characteristics of a stagehand that I was working with on Broadway. I was doing the play, Amadeus. I was playing Mozart the whole time that we were shooting in New York. John trusted his actors, and I admired him enormously. He’d been in the film business for what seemed like forever.”

“There’s a trick to playing a villain. The villain never thinks they are a villain. They think the world is against them,” Burnett mused. “That was what I figured Hannigan with those orphans that she thought were terrible, and she was trying to keep them in order but was the real victim. The very first scene we shot was when Ann Reinking’s character comes to the orphanage and talks to Hannigan about taking an orphan for the week to stay with Daddy Warbucks. I remember I went to John, our director, and I asked him how to play her in the scene, and he said, ‘Just cavort, dear.’ So I did. I came to sit down by the desk, I fell onto the floor and then got back up, and he loved that. I did talk to him about the fact that I felt she should drink a little to soften the edges. She had her bathtub gin, and I played her as if she was always just a little tipsy. Those orphans were driving her crazy, so she needed something to cheer her up.”

Annie grossed $57 million at the domestic box office against a budget of $50 million. It was the tenth highest-grossing movie of the year. Both Curry and Burnett remember watching it with an audience for the first time.

“It was terrific,” Curry enthused. “They really dug it. That was an amazing thing to see. It’s always a relief to see audiences enjoy things you have made as much as you enjoyed making them.”

Burnett seconded, “It was a special kind of thrill because we’d seen some of the footage, but that’s different to when an audience sees it. When civilians who have nothing to do with it, other than going to be a member of the audience, to hear the reaction was just delicious. We were all thrilled. I remember there was a lovely party afterward, and everybody was very up and happy about it.” 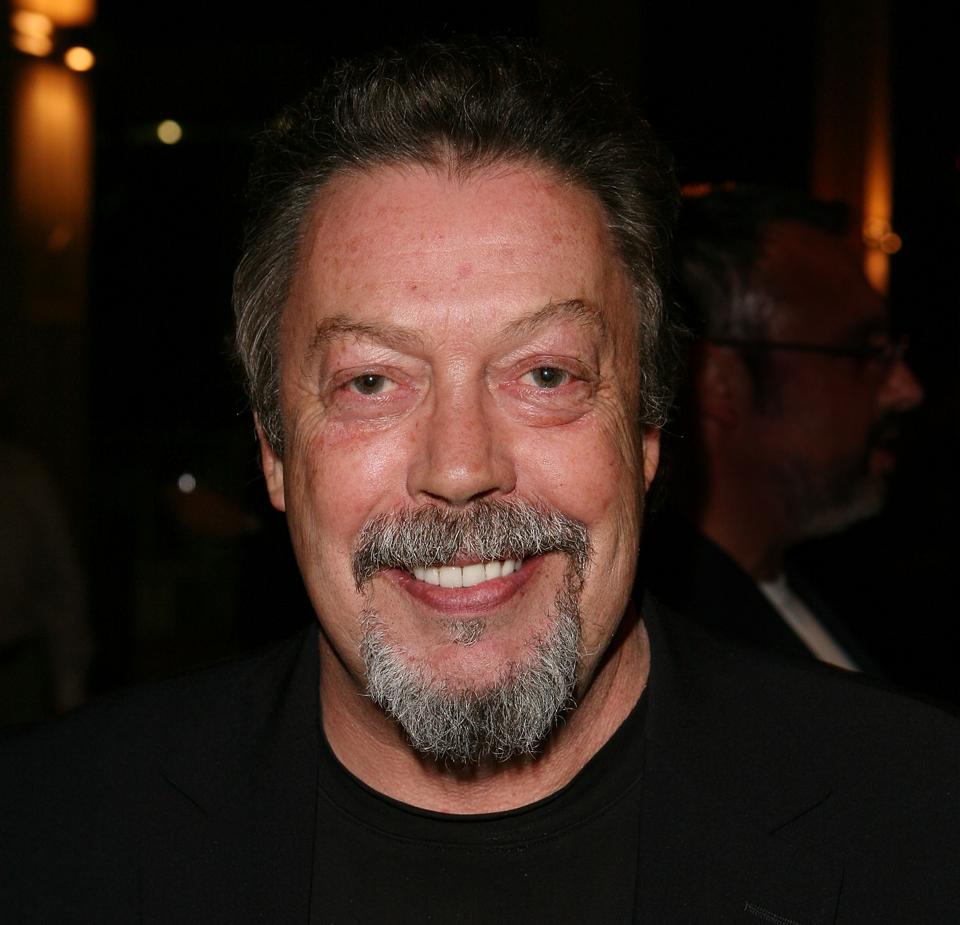 With Annie remaining a favorite with audiences and returning to select movie theaters courtesy of Fathom Events and TCM, could a post-pandemic reunion be on the cards for Curry, Burnett, and Peters, perhaps at a venue like the Hollywood Bowl in Los Angeles?

“If they would, then I would,” Curry confirmed. “I’d love to talk to them about it. I doubt it would happen, but it could be wonderful.”

Burnett added, “Sure. We could do Easy Street, and I could do Little Girls or whatever. To get back together with them would be fun. I’m in touch with Bernadette. We text each other and email and talk on the phone.”

While that will come as great news to fans of the trio and Annie, Curry has two other reasons to celebrate as a pair of his other classic films celebrate milestones in 2020. Clue celebrates its 35th anniversary in December, while The Rocky Horror Picture Show has turned 45.

“I will certainly raise a glass,” Curry said.” I’ve been lucky that my movies generally have long lives, and there has been a heap of these anniversaries this year.”

“I don’t know whether Clue was ahead of its time, but it was underappreciated when it came out, quite considerably. That was a disappointment. The fact that it has found a growing audience over the years who enjoy it is very satisfying. It just goes to show that it is never too late.”