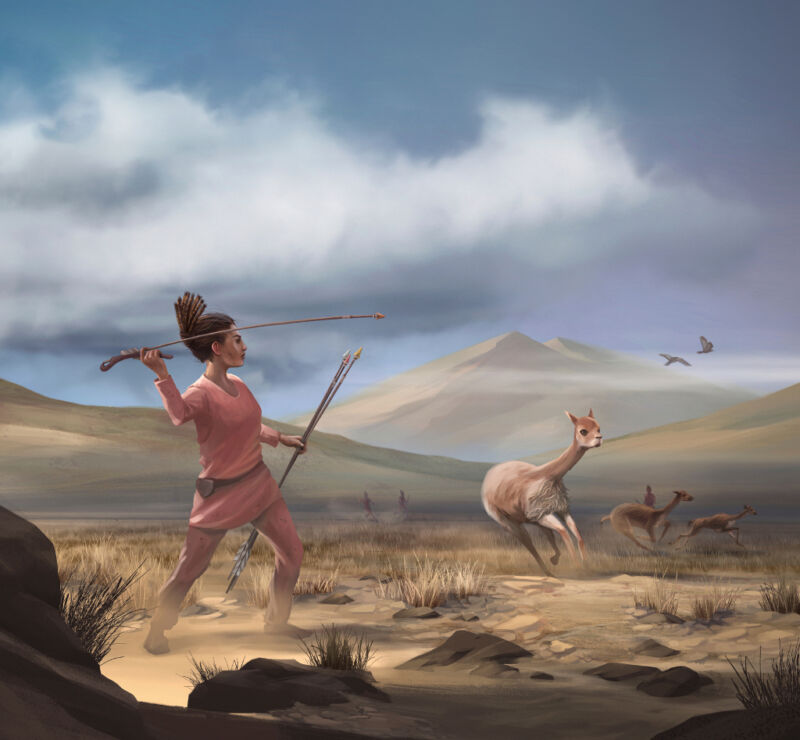 At Wilamaya Patjxa, an archaeological site in southern Peru, archaeologists unearthed the skeleton of a young woman whose people buried her with a hunters’ toolkit, including projectile points. The find prompted University of California Davis archaeologist Randall Haas and his colleagues to take a closer look at other Pleistocene and early Holocene hunters from around the Americas.

Their results may suggest that female hunters weren’t as rare as we thought. And that, in turn, reminds us that gender roles haven’t always been the same in every culture.

“The objects that accompany [people] in death tend to be those that accompanied them in life,” Haas and his colleagues wrote. And when one young woman died 9,000 years ago in what is now southern Peru, her people buried her with at least six stone spear tips of a type used in hunting large prey like deer and vicuña (a relative of the alpaca). The points seem to have been bundled along with a stone knife, sharp stone flakes, scraping tools, and ocher for tanning hides.

Those tools lay neatly stacked together beside the woman’s legs, and Haas and his colleagues say it looks as if they’d been packed in a bag that had long since disintegrated, leaving the tools behind. Most of the young woman’s bones have also succumbed to time. All that remains are a few fragments of skull, her teeth, the ends of her thigh bones (femurs), and a few pieces of the bones of her lower legs.

To help identify a dead person’s sex, archaeologists usually look at the shape of the pelvis, the jawbone, the eye sockets (orbits), and other skeletal clues. But for the young woman of Wilamaya Patjxa, most of those bones hadn’t survived millennia of burial. Instead, Haas and his colleagues analyzed samples of her tooth enamel.

Tooth enamel contains proteins called amelogenins, which play a role in forming the enamel in the first place. The genes that produce these proteins are located on the X and Y chromosomes, and each version is slightly different. As a result, people who are genetically female have slightly different amelogenins than people who are genetically male. The proteins in the ancient hunter’s tooth enamel had a distinctly female signature, with no trace of the Y chromosome version.

The hunter from Wilamaya Patjxa is a young woman with the tools of an activity usually associated with men. If the objects people are buried with are the objects they used in life, then that raises some questions.

At other sites where ancient women have been buried with projectile points, archaeologists have been quick to come up with other explanations, such as the idea that women had used the points as knives. This young woman had an actual knife in her pack, however, so it doesn’t seem very likely that she’d have carried six projectile points for the same purpose. And her toolkit looks a lot like the sort of thing previous researchers had theorized that Paleolithic hunters might have carried. It’s hard to explain that in any other way: this young woman was probably a hunter.

The exception or the rule?

Most periods of history are dotted with stories of women who snuck into the military, onto ships’ crews, or into other male-dominated professions. Because those stories are so unusual, they actually end up shedding light on social norms about who is “supposed” to fight, sail, or hunt. But archaeologists have also found evidence of women as warriors in ancient cultures from the Vikings to ancient Mongolian nomads. Those finds have raised questions about whether women often fought alongside men in these cultures, or whether these particular women were special or unusual.

The hunter from Wilamaya Patjxa raises a similar question: was she the exception that proved the rule, or does her burial suggest that (in at least some ancient cultures) women were sometimes hunters? To help answer that question, Haas and his colleagues looked for other ancient people who had been buried with hunting tools. In published papers from archaeological sites across the Americas, they found 27 people at 18 different sites: 16 men and 11 women.

After thousands of years, it’s sometimes hard to tell whether someone was buried with an object or if it ended up in the grave another way. Not far from the Wilamaya Patjxa hunter, a man was buried with two projectile points. One lay touching a piece of his lower arm, and another was found in the vicinity of his pelvis. Archaeologists can’t be sure if those points were his personal tools or the cause of his death.

Despite caveats like this example, the fact that so many apparent women turned up on that list is surprising. “Female participation in early big-game hunting was likely nontrivial,” wrote Haas and his colleagues. They suggest that as many as a third to half of women across the ancient Americas may have been actively involved in hunting.

All hands on deck

That claim is probably going to spark some debate, especially since it suggests that Pleistocene and early Holocene people in the Americas may have had very different gender roles than modern hunter-gatherers. In nearly all modern hunter-gatherer societies, men do the hunting and women gather plant foods and care for children. But Haas and his colleagues study reminds us that cultural norms vary from place to place and across time.

Most hunter-gatherer groups divide labor the way they do because women are often caring for young children. It would have been easier for men to travel the longer distances required for hunting—plus it’s hard to sneak up on a deer while you’re carrying a crying baby.

Based on animal bones at Wilamaya Patjxa, large game like vicuña and taruca (a relative of deer), were extremely important to the community’s survival. In that case, hunting may have been an all-hands-on-deck activity. Haas and his colleagues also suggest that letting other members of a community keep an eye on the kids while the parents hunted might have freed more women up to bring home the bacon—or venison, in this case.

In other words, whether women hunted or fought probably depended on social factors, not biological ones.