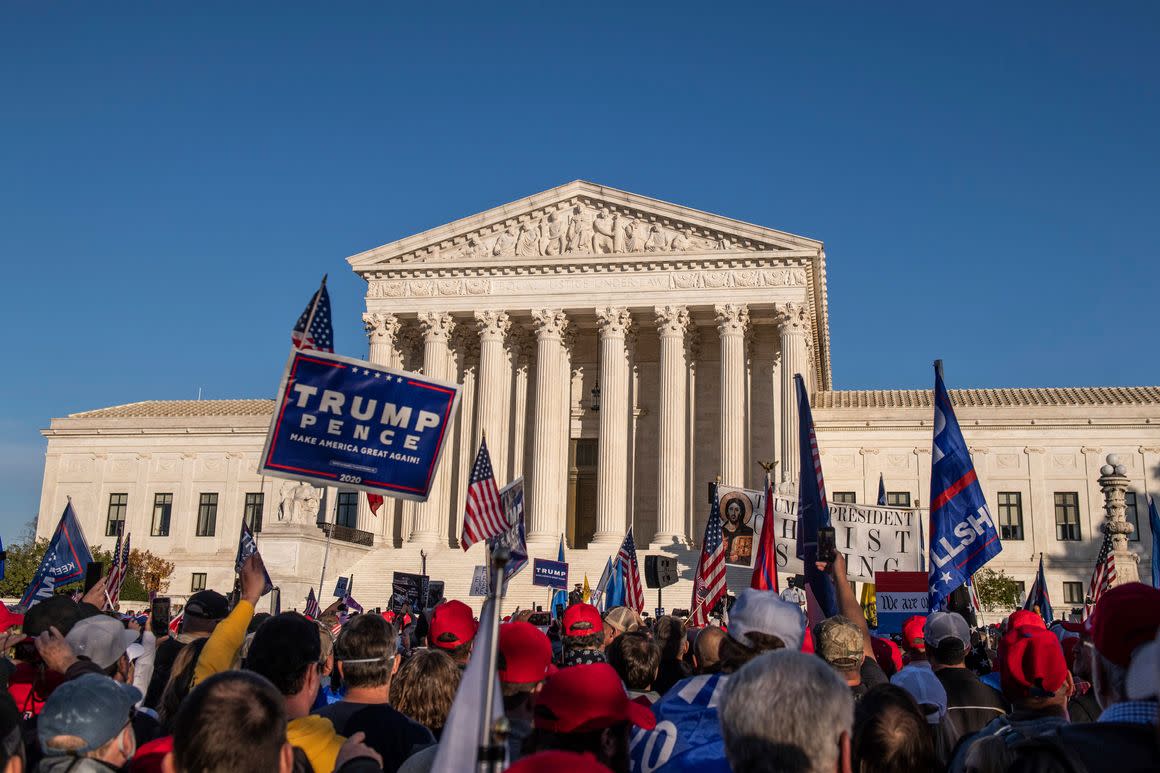 In the end, the blizzard of lawsuits from President Donald Trump’s campaign will amount to nothing beyond a megaphone for disinformation about the integrity of the 2020 election. As destructive as the president’s attempts to undermine democracy are, the most lasting damage to America’s election system is likely to come instead from a series of Supreme Court rulings that appear perfunctory but actually could restrict voters’ rights for years to come.

In the weeks before Election Day, the court weighed in on more than a dozen cases in a way that many portrayed as a mixed bag for voting rights—allowing voting expansions to stand in some cases and sharply curtailing them in others. But that scorecard approach obscures the principal effect of the court’s rulings: In all of the cases, regardless of whether the Trump campaign won or lost, the justices quietly—yet dramatically—rolled back Americans’ voting rights in ways that could do permanent harm—that is, unless Congress steps in.

Let’s start with the visible damage.

In multiple cases, and often without a shred of explanation, the Supreme Court affirmatively stepped in to make it harder to vote. The first case was in Wisconsin in April, right after the pandemic hit. A lower court had extended the deadline for returning mail ballots in the presidential primary by six days. But the night before the election, over a withering dissent by Justice Ruth Bader Ginsburg—her last written opinion—the Supreme Court blocked that extension, leaving voters only hours to obtain and return their ballots. The result: thousands of citizens were unable to return their ballots on time, and their votes were not counted.

Likewise, in South Carolina in early October, the court reinstated a witness requirement for absentee ballots after voting had already started and weeks after the ballot instructions had been printed. While the court exempted voters whose ballots were delivered within two days of its ruling without a witness signature, at least 2,509 ballots arrived after that date and were disqualified. In Alabama, the court stepped in two weeks before Election Day to reinstate witness identification requirements for absentee ballots and a ban on curbside voting.

Until these rulings, federal courts across the country had generally responded to the pandemic by expanding voting access, applying well-established legal doctrines to evaluate burdens to voting rights under the Constitution. Their decisions mainly allowed more voters to take advantage of mail voting and to have safe ballot drop-off and voting locations. Election officials adapted their systems accordingly, and voters requested and received ballots in keeping with the new procedures.

After the Supreme Court ruled in South Carolina, however, appellate courts followed its lead and blocked more than a dozen voter-friendly rulings and settlements within a span of a few weeks. In one egregious case only four days before Election Day, a federal appeals court halted a settlement allowing Minnesota voters to mail back their ballots up until Election Day. At the time, there were more than half a million ballots—all containing instructions with the previous deadline—still outstanding.

These decisions likely disenfranchised tens of thousands of Americans this year, disproportionately people of color. But their most significant damage is not limited to this election. Although the Supreme Court didn’t provide a rationale for its rulings, individual justices articulated two principles that guided their votes, and the way the court applied those principles this election season sets dangerous precedents for the future.

First, there’s what’s known as the Purcell principle, which maintains that federal courts shouldn’t make changes to voting rules close to an election. The supposed purpose of this judge-made doctrine is to prevent confusion and chaos by requiring last-minute changes to election practices that could disenfranchise voters or cause administrative snafus. But in many cases during the lead-up to this election, the Supreme Court itself caused confusion and administrative problems by reversing voting rights rulings from lower federal courts that had already been implemented by election officials, and the circuit courts followed suit. (This would seem to suggest that while the Supreme Court believes this rule applies to lower courts, it is not a constraint on its own rulings.)

What’s more, the Purcell principle has never before been applied as a blunt instrument to block all voting rights protections close to an election, regardless of their impact, as the Supreme Court seemed to do this year. A broad application of this precedent could make it impossible to challenge barriers to voting that were themselves imposed at the last minute, including obstacles erected purposefully to thwart certain voters. This isn’t theoretical; it’s precisely what happened in Texas when a federal appeals court used the Purcell principle to uphold Texas Gov. Greg Abbott’s Oct. 1 executive order, which sharply limited the number of ballot drop-off sites in a way that targeted voters in more populous counties, after a federal district court ruled against it.

Second, and even more dangerous, five of the court’s justices have signed onto opinions endorsing a brand new legal theory—that the Constitution gives state legislatures virtually untrammeled authority to set voting rules for federal elections, no matter how arbitrary or unreasonable. This previously discredited theory, which was first articulated by three justices in one of the cases concerning the 2000 presidential election recount in Florida, could insulate most anti-voter laws—from arbitrary voting restrictions to burdensome registration requirements—from constitutional review by federal courts. What is more, the Court may be poised to prevent even state courts from reviewing their own state’s laws for compliance with state constitutional protections. Indeed, that was the logic Justices Samuel Alito, Neil Gorsuch and Clarence Thomas wanted to apply to strike down the Pennsylvania Supreme Court’s ruling extending the absentee ballot receipt deadline this year. They were outvoted this time, but this logic could also be applied to prevent state and local election officials from expanding voter access beyond legislative mandates—as many did to ensure voters’ health and safety this year.

These theories are breathtakingly radical, and if they take root, they will seriously undermine Americans’ voting rights going forward. But here is the good news: When it comes to voting rights, the Supreme Court does not necessarily get the last word. Congress can take the lead.

The very same constitutional provision that the Supreme Court is eyeing to strengthen the hand of state legislators to restrict voting rights also gives Congress the power “at any time” to override state laws and establish its own rules for federal elections. As Justice Gorsuch, joined by Justice Kavanaugh, put it in his concurrence in a recent case: “If state rules need revision, Congress is free to alter them.” Chief Justice John Roberts, writing for the court’s conservative majority, made a similar point in a redistricting case two years ago.

The House has already set to work to do this, passing two voting rights bills last year. H.R.1 (The For the People Act) would establish a basic federal foundation for voting—from automatic and online voter registration, to accessible early and mail voting. Every voter should have a clear, fair path to the ballot box; as the pandemic has shown, this is not the case for many Americans. H.R. 4 (The Voting Rights Restoration Act) would restore critical protections against racial discrimination in voting that the Supreme Court hobbled in a 2013 case. Had these protections been in place this year, they would have prevented key states from shutting down polling places in a way that disadvantaged voters of color, for example. With a few additions, these two bills have the potential to substantially constrain the ability of partisan actors, including state legislatures, to limit the franchise.

H.R. 1 would strengthen democracy in other ways. It would also curtail partisan gerrymandering, where the Supreme Court has abdicated responsibility and passed the ball to Congress. Without legal constraints, politicians have become increasingly brazen in manipulating district lines to lock in their power and insulate themselves from accountability to voters. Under H.R.1, gerrymandering would be legally barred, and lines would be drawn by independent commissions rather than self-interested partisans. And H.R. 1 also provides the best answer to the Supreme Court’s decades-long assault on campaign finance laws, including in the much-reviled Citizens United v. FEC (which Justice Ginsburg called the worst ruling of her tenure). The court’s rulings have dramatically shifted the balance of power in federal elections in favor of the very largest campaign donors and away from the everyday Americans who make small donations. H.R.1 would shift the balance back through a transformative small donor matching system, among other things.

House Speaker Nancy Pelosi has promised that H.R.1 will be the first order of business in the next Congress. Republicans, whether they control the Senate or not, should reconsider their opposition. The vast majority of H.R.1’s provisions enjoy broad bipartisan support, among voters and election officials of both parties.

The pandemic forced millions of Americans to look with new eyes at the way our voting systems work, and to be willing to change past practices to participate in our democracy. They were undaunted and voted in record numbers. But they are also newly aware of obstacles to voting—obstacles the courts should have protected against—and are unlikely to tolerate them going forward.