Michael Jordan has an affinity for the Air Jordan I. He also appreciates the style in classic tennis court designs. The Jordan Brand, then, decided to pair those interests together to create a special shoe just for the basketball legend in what is now known as the Air Jordan I Centre Court.

Jordan liked it so much he asked for more.

The shoe was made famous during a cameo in the 2019 ESPN documentary The Last Dance, with Jordan wearing the shoe during interviews on the final two episodes, sparking a frenzy among Jordan followers unaware of the sneaker’s prior existence. The design was then sent to a few select influencers and it eventually made its way to a quick sell-out during the initial launch in December. But there’s more Centre Court coming. And it was all planned out before The Last Dance.

The Centre Court is all about Jordan. “Jordan Brand design teams are constantly inspired by the greatness of Michael Jordan and regularly sketch, pitch and create products exclusively for him before even considering taking them to retail,” says Graeme McMillan, Jordan Brand senior design director. “Such was the case with the Centre Court. He really liked them and even asked for several different colorways.”

While visiting the Nike campus outside Portland in 2018, the Jordan Special Projects Team showed Jordan sketches of “luxury low-cut shoes they had been working on specifically for him,” McMillan says. “The team knew Michael loved the iconic design aesthetic of the Air Jordan I Low and traditional tennis court shoes. The team combined these elements to create a clean, classic shoe with premium materials and a modern twist.” 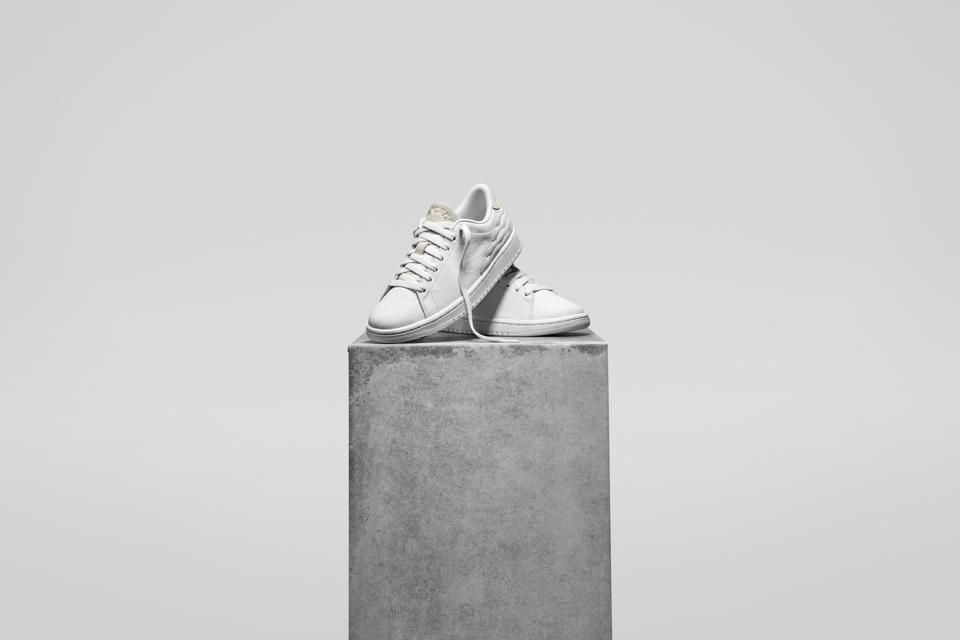 The Air Jordan 1 Centre Court was made originally because of Michael Jordan’s interests.

The Air Jordan I Centre Court features full-grain leather in the upper with suede accents at the heel and tongue for a premium touch meant to “speak to Jordan Brand’s attention to craft and quality,” McMillan says. An Air-Sole unit gets encapsulated in the heel, just like the original Air Jordan I. In addition, a Zoom Air unit is embedded in the heel of the sockliner, creating a double layer of cushioning. The iconic Wings logo—the first logo for Michael Jordan that adorned the Air Jordan I—is enlarged and wraps around the back of the shoe to “add distinction.”

The first colorway of the sneaker, White on White, sold out with a price of $135 during the Dec. 21 release. McMillan says, as Jordan himself requested, the brand will launch additional colorways of the shoe moving forward, so expect multiple new colorways from Jordan soon. The upcoming additional Centre Court designs give fans of both classic tennis styling and famed Air Jordan silhouettes a new shoe to chase.

It all came from designing for the man bearing the brand’s name.

Covid concerns, no Trump: An inauguration like no other