Mr. Baird grabbed his laptop to draft a memo to his clients. He didn’t go to sleep until 5 a.m. By 8 a.m., he was back in the office.

“I’m hopeful we won’t have a repeat of that this year,” said Mr. Baird, chief investment officer of Plante Moran Financial Advisors in Kalamazoo, Mich.

Whether markets will prove more orderly after Tuesday’s elections is anybody’s guess. Investors are heading into what could be the most volatile week for markets all year. Although national polls show Democrat Joe Biden leading in the presidential race, many money managers and strategists are reluctant to project confidence after being caught off guard by a number of market-jolting shocks over the years, including Mr. Trump’s 2016 victory, the U.K.’s Brexit vote and the coronavirus pandemic.

About the only consensus across the Street now is that Tuesday’s elections will have stark consequences for investors for years to come. 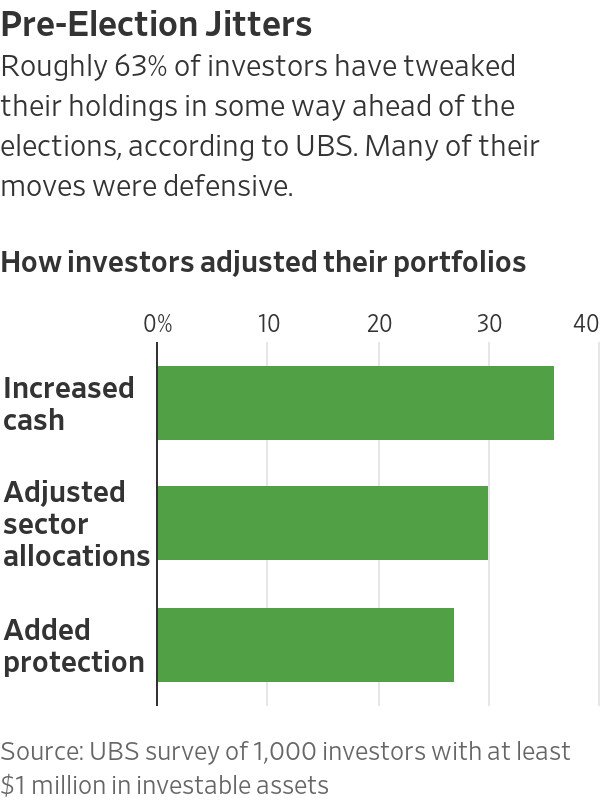 It is true that stocks have historically risen regardless of who has controlled the White House. But the stock market will enter the week in a vulnerable position, having closed out its worst month since March after a steep rise in coronavirus cases heightened fears of more lockdowns. The S&P 500 fell 5.6% last week, trimming its gains for the year to 1.2%.

Moreover, Messrs. Trump and Biden have sketched out dramatically different visions for everything from the pandemic to energy policy to immigration, leaving investors betting there will be unique sets of winners and losers depending on who wins the presidency.

Roughly 6 in 10 investors with at least $1 million in investible assets already have made changes to their portfolios ahead of the elections—with many increasing the share of cash they have on hand or shifting money from one sector to another,
UBS
found in a survey. And more than half of investors say they anticipate making additional changes to their portfolios depending on who wins Tuesday’s elections.

Those making tweaks to their portfolios have already had a noticeable effect on the markets.

As polls have shown the chances of a Democratic sweep rising, long-term bond yields and shares of smaller U.S. companies have climbed, too. The thinking there is that a blue wave would increase the chances of Washington pushing through a multitrillion-dollar coronavirus-aid package to bolster the economy. In contrast, a divided Congress seems less likely to be able to agree on a sweeping fiscal stimulus package. 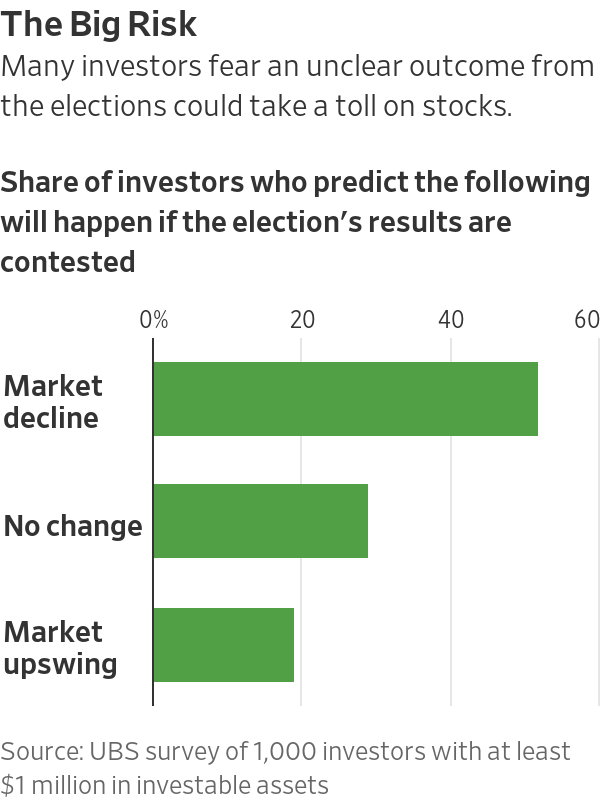 Still, even those who buy into the conventional views of what a divided Congress or blue wave might look like caution that polls and policy proposals aren’t foolproof tools for making market bets.

Take the 2016 race: Pundits widely predicted a Trump victory would shave upward of 10% or 15% off the S&P 500. They seemed right for a few hours on election night—but by the close of the next trading day, stocks were higher.

“Figuring out the news isn’t necessarily good enough, because the paradigm might change. One day after the election we may go back and be revisiting all our rules of thumb,” said Bruce Monrad, chairman and portfolio manager at Northeast Investors Trust.

A pre-markets primer packed with news, trends and ideas. Plus, up-to-the-minute market data.

Strategists also had widely agreed that a Trump presidency would lead to deregulation across industries, boosting the energy and financial sectors. They were right at first. But today, energy and financial stocks are among the worst-performing groups in the S&P 500 since Mr. Trump’s inauguration, hurt by broader forces such as a collapse in oil prices and historically low interest rates.

What the twists and turns of the past few years have taught investors is that winning market bets are hard to predict, but even tougher to time correctly.

Dave Donabedian, chief investment officer of CIBC Private Wealth Management, said he has been in constant communication with clients since August. His webinars, phone calls and emails have aimed to relay one message: Don’t be tempted to overhaul portfolios now based on what might happen on Nov. 3.

How could the results of U.S. presidential election swing global markets? Join the conversation below.

Hedge funds and billionaire investors may be more aggressive in trying to exact quick wins over the next week. Four years ago, prominent investors such as Jeffrey Gundlach and Carl Icahn turned against conventional Wall Street wisdom and correctly bet that Mr. Trump would win. On the flip side, hedge-fund manager George Soroslost nearly $1 billion betting the market would fall after Mr. Trump’s victory.

But most long-term investors see trying to game election night itself as a losing proposition. The market will adjust, whether a blue wave results in massive stimulus and a tax increase, a divided Congress results in more of the status quo or something else altogether follows the elections, Mr. Donabedian said.

In his mind, the only true risk to the stock market is if there is a contested result.

“We’ll be on call [Tuesday], but hoping people will be able to sleep through the night anyway,” Mr. Donabedian said.

Write to Akane Otani at akane.otani@wsj.com