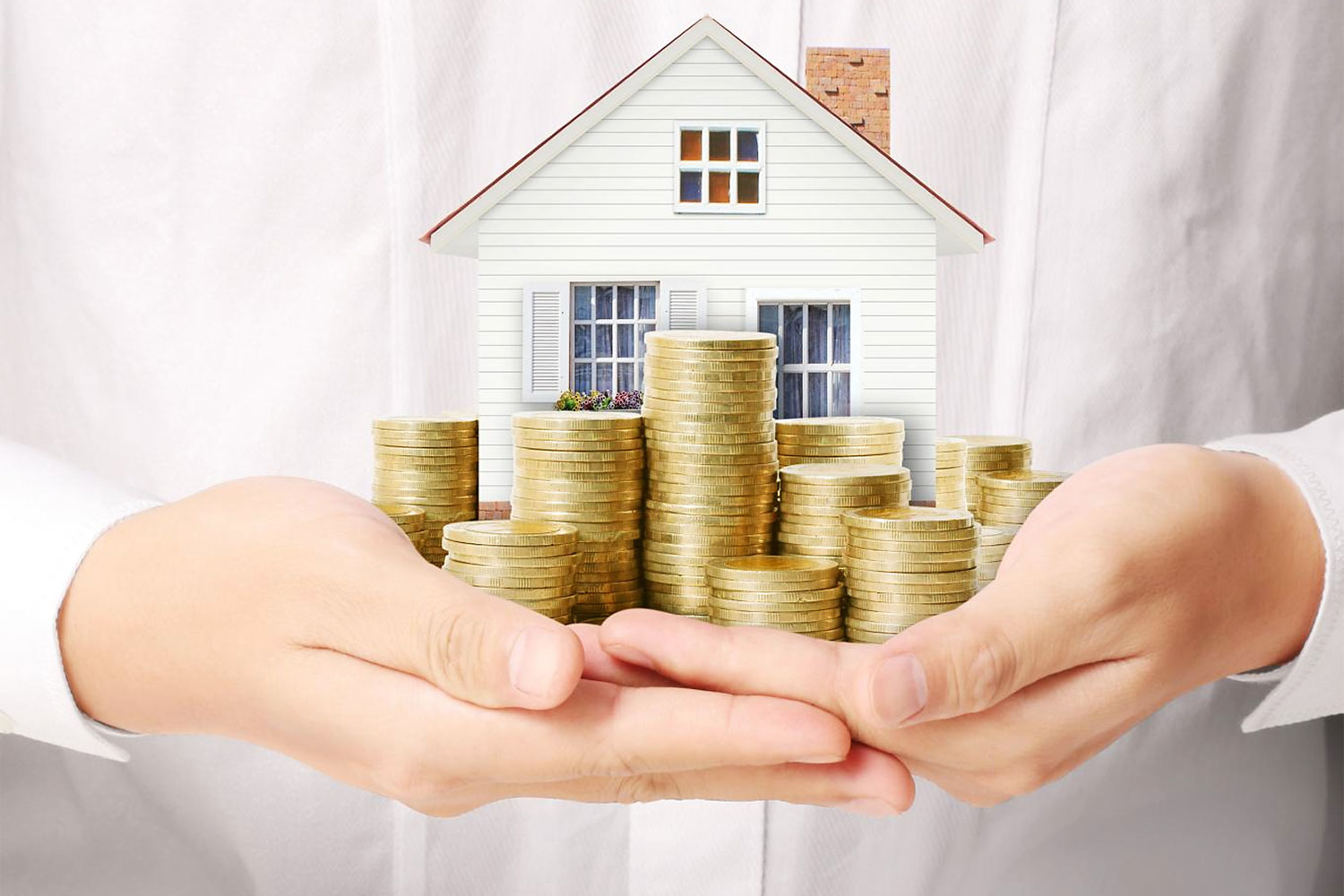 Housing loans were a key segment contributing to a second-quarter consumer loan expansion in the commercial banking sector of 4.8%, albeit a slower pace than 5.6% in the previous quarter.

Housing loans classified as Stage 3 under the new accounting standard, Thai Financial Reporting Standards 9 (TFRS 9), or non-performing loans (NPLs), came in at 4.04% in the second quarter, unchanged from the first quarter, mainly due to the central bank’s debt relief measures, especially the debt holiday policy.

Of the total, 4.55 trillion baht or 31% was derived from commercial banks, while mortgage loans represented 35% of the whole.

Tharith Panpiemras, senior director of the banking supervision and risk assessment department at the Bank of Thailand, said healthy housing loan growth in the second quarter was supported by lower prices at residential projects and low interest rates for mortgage loan products.

With the lessons of the 1997 Asian financial crisis still fresh in the minds of many, property developers want to hold as much cash in hand as possible to have greater flexibility in liquidity management. As a result, business operators have discounted home prices and offered promotional campaigns to attract homebuyers.

At the same time, the lower interest rates are aligned with the central bank’s policy easing.

A reduction in the contribution rate of the Bank of Thailand’s Financial Institutions Development Fund is another tool that allowed banks to cut their prime lending rates across the board, including the minimum lending rate (MLR), minimum overdraft rate (MOR) and minimum retail rate (MRR), by about two percentage points from last year to June of this year. 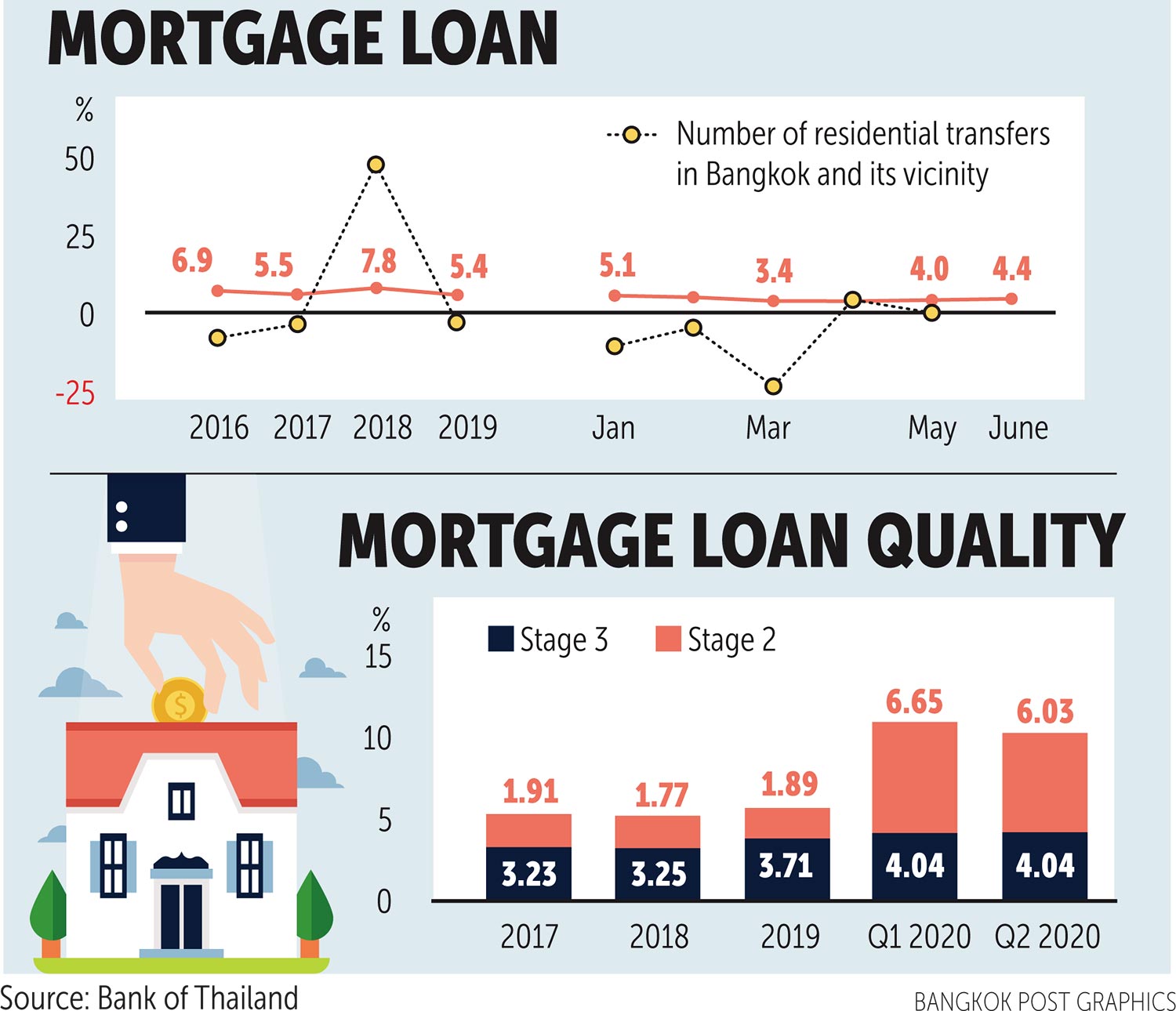 “Lower prices are a key factor attracting homebuyers, especially those who have real demand and high purchasing power,” Mr Tharith said. “This customer segment has largely not received a heavy impact from the virus outbreak.”

The loan-to-value (LTV) ratio for mortgage loans in the second quarter remained unchanged from early this year, staying at 80-90% on average.

In addition, mortgage refinancing loans and competition in the segment have increased. Financial institutions have paid more attention to asset quality amid the Covid-19 crisis and economic downturn. 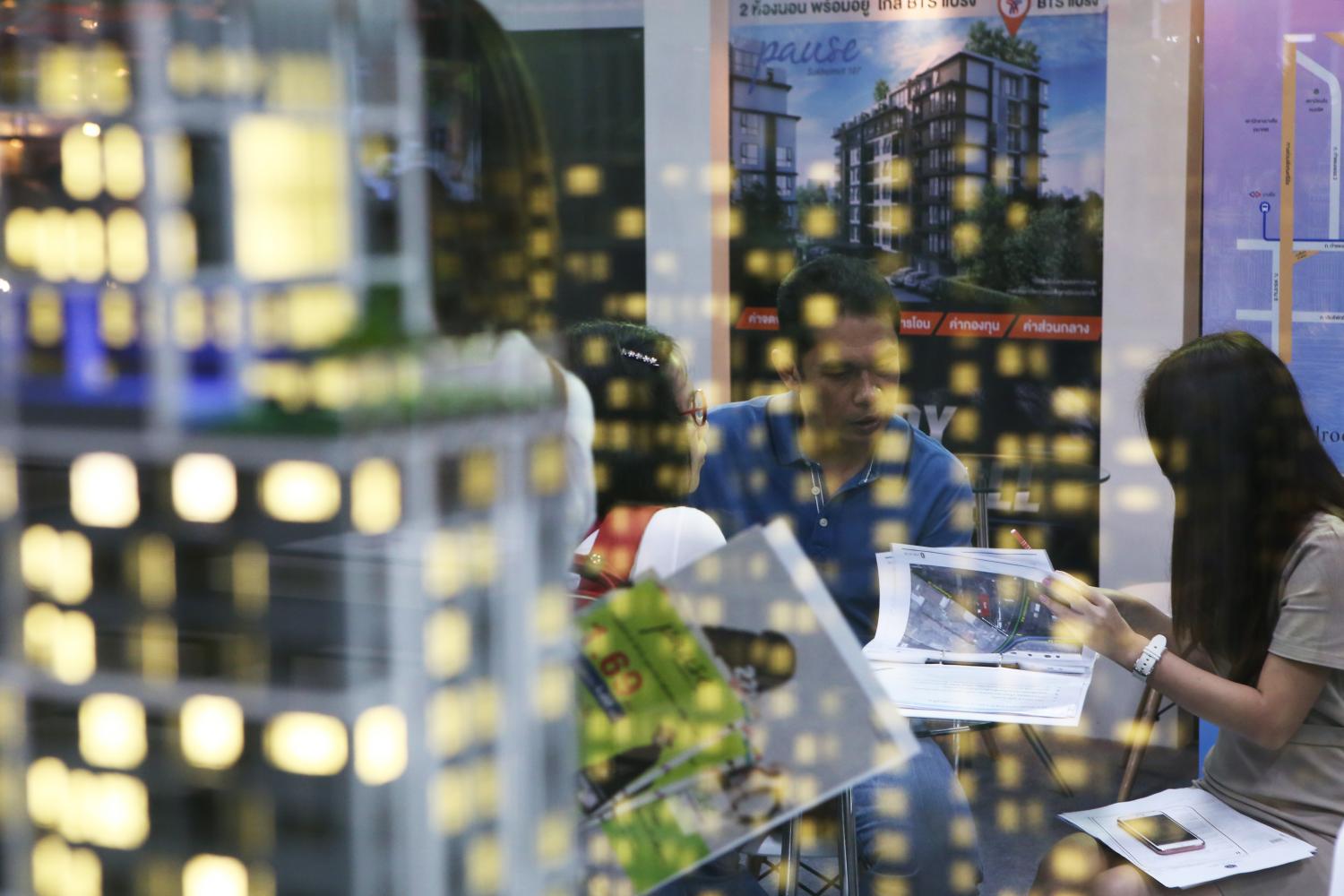 Kasikornbank (KBank), the country’s largest commercial lender by total assets, could revise up its housing loan growth target this year after booking better-than-expected growth during the first half.

The bank saw new housing loans of 45 billion baht for the first six months, up 14.1% year-on-year, compared with a full-year projection of 81 billion baht. The double-digit growth rate was a first for the past few years, thanks to real demand for housing.

Photjanart Sangpruaksa, first senior vice-president of KBank, said housing loan demand has continued in the third quarter and will transpire throughout the second half of 2020.

With this anticipated scenario, the bank has considered increasing its new loan booking target for the year, whereby new housing loan value could jump to 100 billion baht.

“Overall, we found better credit scoring of mortgage loan applicants despite the crisis,” Mr Photjanart said. “This reflects real demand. So the bank expects to control asset quality of this loan segment satisfactorily, albeit targeting growth by a higher loan amount.”

The bank’s NPLs for mortgages have ticked up since the start of the year, mainly due to the economic downturn, but the bad-loan level of 4.8% is considered manageable.

KBank aims to cap the NPL ratio for home loans at 5% this year. The bank’s total housing loan portfolio amounted to 380 billion baht in the first half.

Mr Photjanart said the middle- to upper-income segments, buying homes priced at 3-5 million baht and above 8 million baht per unit, are identified as individual customers and small-business owners. These customer segments are KBank’s key targets for revving up housing loans.

As KBank takes the pole position in the domestic banking industry for small and medium-sized enterprise loans, this also supports the bank’s mortgage loan growth in the customer segment. Individual and SME homebuyers rank equally at 50% in terms of customer numbers, representing 40% to 60% of mortgage loan amount.

The bank has also tightened credit scoring for some virus-hit loan applicants, particularly those who are in tourism-related sectors such as hotels, restaurants and airlines, to control credit risk.

Still, strong demand for home loans left the bank’s approval rate for housing loan products at an unchanged ratio of 70% compared with the pre-pandemic period.

With a 30% market share of outstanding mortgage loans in the domestic banking system, state-owned GH Bank has adjusted this year’s loan growth target in the wake of the coronavirus crisis.

Mr Chatchai said the bank’s bad-loan ratio is projected to rise to 4.75% of total outstanding loans from the existing 4.52% at the end of the second quarter. GH Bank’s NPL ratio was 4.09% at year-end 2019.

Higher loan delinquency is mainly attributed to the outbreak’s impact on GH Bank customers, 40% of whom are classified as low-income earners, he said.

If a second outbreak occurred in the country, this would worsen customers’ debt-servicing ability, especially those who can service their debts normally and have not been involved with the bank’s 480-billion-baht debt relief measures, Mr Chatchai said.

GH Bank has set up loan-loss reserves of 2.5 billion baht for debt relief measures and allocated monthly capital buffers of 500 million baht, per the Bank of Thailand’s regulatory requirements.

Nathapol Luepromchai, executive vice-president and head of the mortgage division at Bank of Ayudhya (BAY), said the commercial banking sector booked broadly positive mortgage loan growth in the second quarter in terms of outstanding loan growth on a year-on-year basis.

BAY expanded its home loan portfolio to 273.87 billion baht in the April-to-June quarter, up 1.4% year-on-year. But the bank booked a contraction for new housing loans in the same period, albeit a lower decline than expected.

The contraction in new home loans was in line with sluggish consumer demand against the backdrop of the persistent crisis and global economic downturn.

Housing loan demand in the first half was supported by promotional campaigns by property developers with prices discounted 10-30%. At the same time, housing loan expansion during the outbreak drew on real demand from the middle- to upper-income segments.

He expects housing loan demand and mortgage loan expansion to continue at a modest pace in the second half.

“Developers have adopted aggressive marketing and promotional campaigns from April to May, and I personally think it already peaked out,” Mr Nathapol said. “Promotions are expected to slow down, and a discount rate of 30% [per unit] is unlikely in the second half.”

The bank is not tightening criteria for some customer segments affected by the pandemic, such as the tourism-related segment. Even so, risky customer groups will naturally find it harder to access bank loans.

“Basically, we require a financial statement of six months retrospectively,” Mr Nathapol said. “Loan applicants who have been affected by the pandemic and have lower income will not be able to access loans under the bank’s existing criteria.”