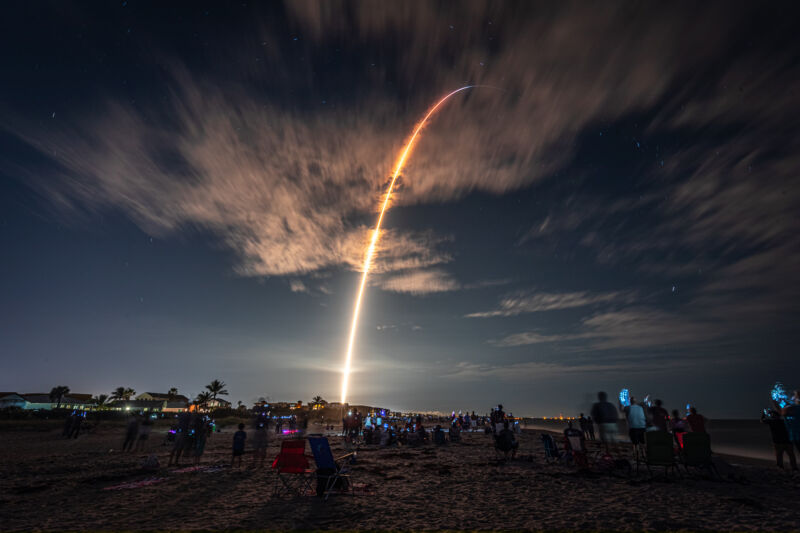 Enlarge / The Crew-1 mission streaks into the Florida sky on Sunday evening.

And soon, they were there.

By all appearances, SpaceX’s first operational Crew Dragon flight started off successfully, sailing smoothly through the arduous ascent phase of the mission. A couple of hours after launch, SpaceX engineers were troubleshooting an issue with heaters on fuel lines leading to the spacecraft’s Draco engines. But this will likely be solved, and on Monday night an hour before midnight, Florida time, the crew—NASA astronauts Michael Hopkins, Shannon Walker, and Victor Glover; and Japanese astronaut Soichi Noguchi—should dock with the International Space Station.

If all goes well, their flight to the space will be entirely autonomous. The crew will not need to touch a flight control on Crew Dragon’s touchscreens.

This Crew-1 mission comes after more than a decade of work by SpaceX and NASA to build a spaceship capable of safely launching humans into orbit, getting them to the space station, and safely back to Earth. Although Sunday’s launch was just the first step, it was a critical step.

“It’s been quite a journey,” said Kathy Leuders, the associate administrator at NASA in charge of human exploration. “I’m pretty choked up thinking about the folks who have spent years of their lives getting ready for this mission.”

The flight of a Dragon named Resilience by its crew represents a huge win for NASA, for multiple reasons. First of all, nearly a decade after the space shuttle retirement in July, 2011, NASA finally has an independent means of getting its astronauts to the International Space Station.

While it will continue to work with Russia to maintain the orbiting laboratory, the space agency is no longer beholden to a power with which the United States maintains tenuous relations. Moreover, in the unlikely event of a problem with the Russian Soyuz launch system, there will now be a second lifeline to the space station.

Additionally, NASA took a big risk with its “commercial crew” program by relying on private companies to replace the space shuttle. After this public-private program was created a decade ago, key members of Congress who authored NASA’s budget were skeptical this would work, and chronically under-funded it for years. And there were plenty of people who doubted an upstart company like SpaceX had the goods to safely put humans into space.

NASA faced a critical decision in 2014, when it came to selecting finalists to complete development of shuttle replacements. The agency had a finite amount of money, and three finalists—Boeing, Sierra Nevada Corp., and SpaceX. Boeing, with its legacy of success and status as a long-time contractor for NASA, was the favorite. With his limited budget, NASA’s chief of human spaceflight, Bill Gerstenmaier, faced pressure to select just a single contractor to ensure the program’s success.

“I will say that we had many healthy discussions about the number of awardees, and I believe most people involved in the selection thought we were only going to make one award,” Phil McAlister, director of commercial spaceflight development at NASA, told Ars. “I was adamant that we had to maintain competition, and I was probably the loudest voice advocating for that at the time, but ultimately it was Bill’s decision. I know he put a lot of thought into the question of ‘how many,’ and he ultimately chose two, which I think was one of the most consequential decisions we made.”

Ultimately, NASA chose both Boeing and SpaceX. The ensuing competition spurred both companies to move faster. With Sunday’s flight the newer, less-proven SpaceX delivered first. Boeing has performed a test flight of its Starliner spacecraft, but because that mission failed to reach the International Space Station due to multiple errors, Boeing must fly a uncrewed do-over mission in 2021. Boeing’s first operational mission is unlikely to occur until sometime in 2022.

Finally, by betting on commercial spaceflight, NASA has opened the door to a future in which more and more people will be able to go to space. Already, a commercial mission on Crew Dragon carrying Tom Cruise is scheduled for a little more than a year from now. On Sunday evening, during a post-launch news conference, President Gwynne Shotwell suggested, complete with a wink, there would be more commercial flights to follow.

“It’s really the beginning of a new era in human spaceflight,” she said. And she may just be right.