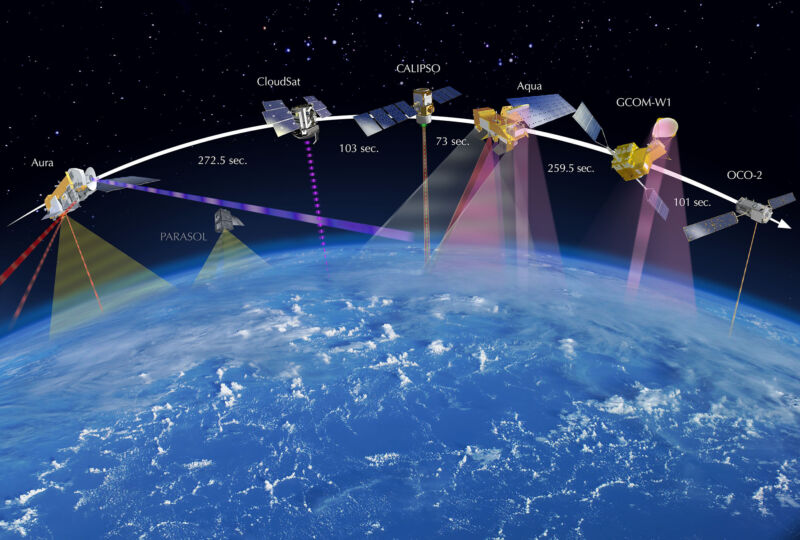 Enlarge / NASA is concerned about protecting its “A-Train” of satellites, some of which are depicted here, and monitor Earth’s climate.
NASA

The founder of a Texas-based company that wants to put more than 200 very large satellites into low-Earth orbit has pushed back on concerns from NASA that these spacecraft pose an orbital debris threat.

“We’re not a bunch of cowboys launching satellites,” said Abel Avellan, founder of AST & Science, in an interview. “This is a serious, well-funded project.”

The company, which has 160 employees and has moved into XCOR’s old facility at Midland’s airport, has asked the Federal Communications Commission for access to the US market to sell Internet connectivity to mobile phones from space. NASA took the rare step of objecting to the AST mega-constellation proposal to put as many as 243 satellites in an orbit at 720km, commenting last Friday that it could lead to a “catastrophic collision” with its A-Train satellites in a nearby orbit.

Avellan said the “SpaceMobile” satellites do indeed have a very large cross-sectional area perpendicular to the ground, as this is the only way to deliver direct satellite-to-broadband signals. “There is no magic,” he said. “If you want something to connect directly to a handset, it’s not going to be a CubeSat.”

Each of the satellites will include a large antenna, comprising an area as large as 900 meters squared. However, Avellan said the satellites will fly edge-on, “like a frisbee, but without the spinning.” He said the satellites’ cross-section along the direction of motion is only about 3 meters squared. The company has calculated that the probability of a collision occurring at random—assuming no avoidance maneuver—to be only about 1-in-5,000 over its lifetime, or 1-in-20 across the entire constellation.

However, since NASA’s comment other organizations have also raised concerns on the docket about the SpaceMobile constellation. T-Mobile and Verizon said the company’s operations could interfere with their terrestrial networks. Others have echoed NASA’s concerns about debris, noting that as a “start-up” company AST has no experience in building satellites, let alone the very large ones proposed in the FCC petition. One such comment came from Tech Freedom, a technology think tank, suggesting there were no guarantees that the AST satellites would be able to avoid collisions.

“History tells us that, for completely new satellite systems without significant heritage in terms of either satellite design or satellite builder, the failure rate may be well above 10 percent, and may approach the 30 percent failure rate experienced by the Iridium system,” the organization commented. “At even half of the Iridium first generation failure rate, that still will create a combined cross section of 36,000 square meters of junk over the next decade around which other operators will have to maneuver, not to mention the existing debris which can’t move to avoid new debris caused by the AST constellation.”

Avellan said AST does have the experience and ability needed to build large, robust satellites. He said the company has 750 patent claims on technology for the design of the SpaceMobile satellites and has raised $128 million after a recent Series B capital raise. The company’s strategic and financial partners includes Vodafone Group, Rakuten, and Samsung.

“I have not made a lot of noise about this project, because I did not want China to start copying it too early,” Avellan said.

Still, these are indeed very large and complex satellites. The company has said it is developing a “mechanical deployment system” that will enable on-orbit extension of arrays to produce “ultra-high-power generation” of 100kW, or more. In September, at the EngageSpace showcase for the US Air Force, the company said its satellites would create enough power on orbit “to fully illuminate cell phones on the ground or other applications such as SARS, jamming and intercept, tactical early warning missile defense and any other high power requirement.”

AST is in the process of building a prototype satellite in Midland, Avellan told Ars. This next test satellite, “BlueWalker 3,” will be about half the size of SpaceMobile satellite and will launch during the second half of next year. Complete with a deployable 10-meter array and reflector, this test is seen as a “stepping stone” to the company’s final satellite design.

As of Tuesday evening, the company had not yet talked to NASA about its concerns. However, the space agency’s administrator, Jim Bridenstine, stood behind his agency’s comments.

“Protecting our assets and preserving the orbital environment for public and private activities is critical to NASA,” he told Ars. “NASA’s analysis demonstrated that the potential for conjunctions of what is being proposed is extraordinarily high. For these reasons, NASA provided technical comments to the FCC in order to protect not just the agency’s assets but the company’s future satellites as well.”

Bridenstine said the agency would work with the FCC and company to try to find a mutually acceptable path forward. He also urged Congress to fund civil space traffic management responsibilities under a new office at the Department of Commerce. “The Department of Commerce must be given the proper authority and funding for space traffic management before an inevitable collision occurs that will threaten the future of both government and commercial space operations,” he said.