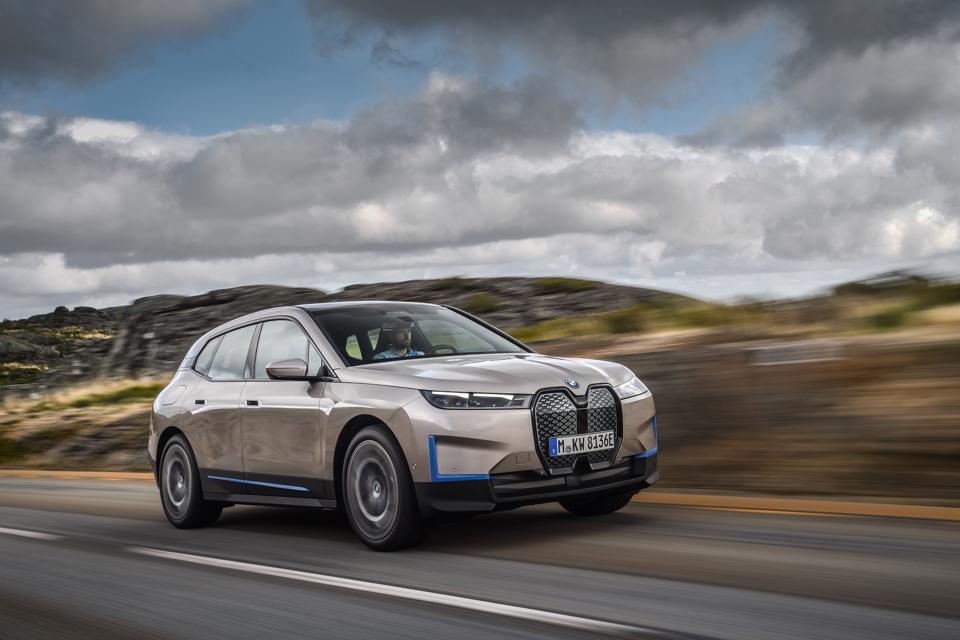 Americans will have to wait until 2022 to buy BMW’s new iX all-electric SUV, that’s 7 years after Tesla TSLA launched its Model X, and by then it will still be two to three years behind the U.S. company’s current crucial battery and connectivity technology.

That’s the view of Professor Stefan Bratzel, director of Germany’s Center of Automotive Management, who says upcoming premium electric vehicles from the likes of Mercedes and Audi will also lag behind Tesla. 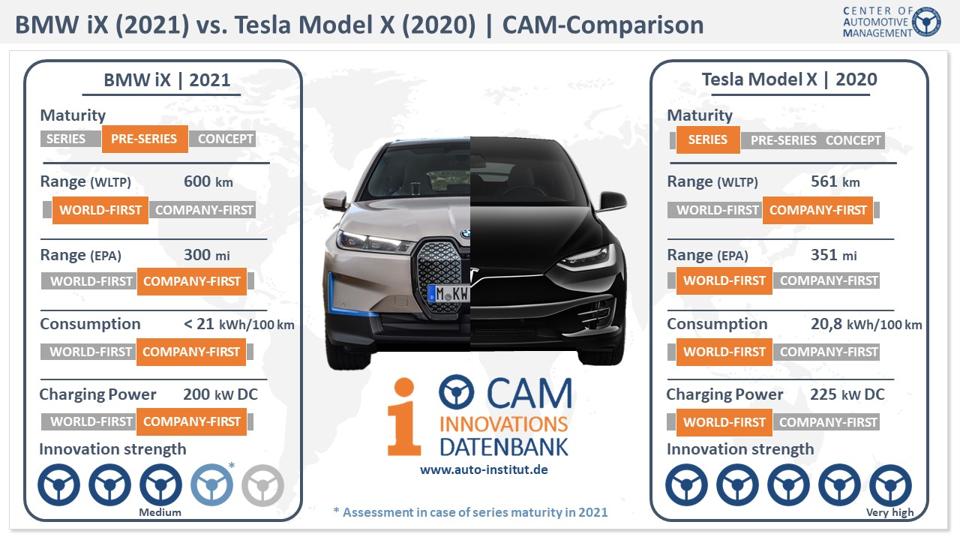 Some analysts though reckoned the new iX would be a formidable competitor in this rarified market, where prices start in Europe at close to $90,000 after tax when it goes on sale late next year.  The base model iX is expected to be priced at just over $100,000 after tax.

The 500-hp iX, powered by 2 electric motors that drive all the wheels, will have a claimed range of 373 miles under European rules and over 300 miles in the U.S. None of these range claims are likely to stand up under legal high-speed cruising. It will accelerate from rest to 60 mph in under 5 seconds.

Tesla launched the Model X SUV in 2015 and BMW, and other competitors, have had 5 years to mobilize huge financial and engineering resources to overtake upstart Tesla. 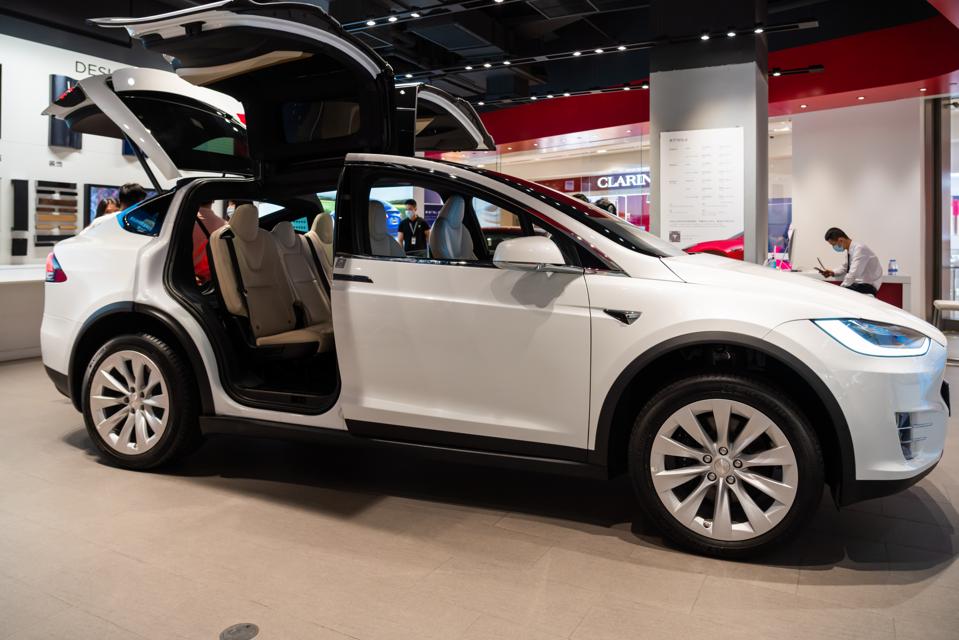 Bratzel says they are getting closer but still lag.

“I would say BMW is getting closer but it will still take a few years really to match Tesla in all aspects. Tesla has the big advantage that it has no old legacy technology and can concentrate just on electromobility and nothing else. This is still a problem for BMW and the other players. Tesla and other E-mobility manufacturers have focused on the battery especially but refined the technology to use less cobalt, and on the operating systems of the car. BMW has also been less ambitious in its plan for Level 3 system (progress towards autonomous driving,” Bratzel said.

Some investors reckoned the BMW iX is close to Tesla.

“Specs point to a competitive package well ahead of the Audi e-tron and Mercedes EQC; broadly in line with Tesla’s Model X’s efficiency and range today, but maybe worse at the time of launch,” said investment bank UBS analyst Patrick Hummel.

Hummel said the iX powertrain will be used in all BMW’s upcoming battery electric vehicles (BEV). He said BMW’s BEV powertrain knowhow was superior to its competitors, except Tesla. 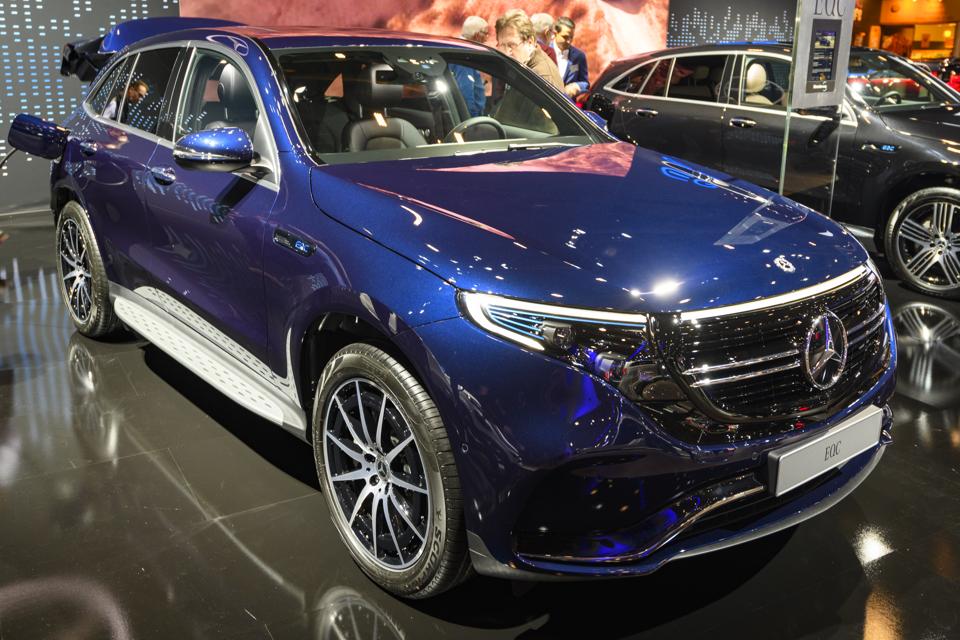 BMW has been criticized for failing to design vehicles from the ground up to be electric, relying on sharing with internal combustion engine (ICE) machines. BMW is expected to switch to electric only designs in 2025.

Investment researcher Jefferies said the launch of the iX should reassure investors a misconception that BMW was lagging other big manufacturers in BEVs was wrong.

CAM’s Bratzel can see plenty of daylight between Tesla and the German opposition, and much work to do.

“BMW, Mercedes as well as (VW’s) Audi are at least two to three years behind in terms of electric propulsion systems including batteries and more in terms of connectivity but the incumbents have now realized they have to do something to catch up. They’ve all tried to develop their own operating systems but this is an area where it takes a while and it’s not that easy in a software environment to catch up fast,” Bratzel said.