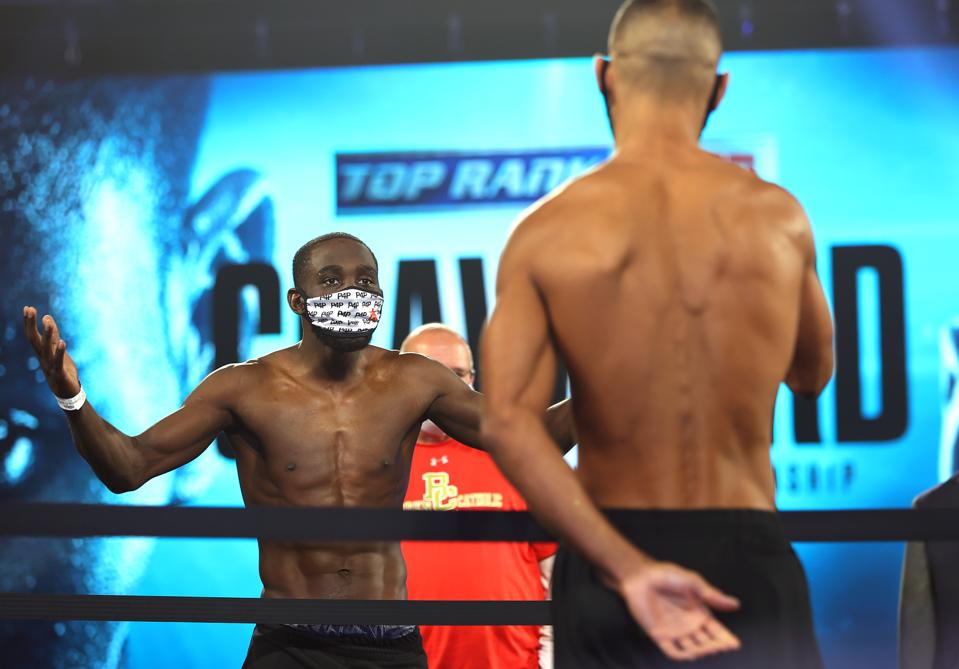 LAS VEGAS, NV – NOVEMBER 13: Terence Crawford and Kell Brook face-off during the weigh-in for the … [+] WBO welterweight title in at the MGM Grand Conference Center on November 13, 2020 in Las Vegas, Nevada. (Photo by Mikey Williams/Top Rank Inc via Getty Images

Before the Terence Crawford vs. Kell Brook fight began on Saturday night, Crawford was looking to prove that he (and not Canelo Alvarez) is the No. 1 pound-for-pound fighter in the world. And boxing fans were hoping that Crawford, by winning handily, would put more pressure on Top Rank and Premier Boxing Champions matchmakers to finally make Crawford vs. Errol Spence.

Crawford made a pretty darn good case for both, as he demolished Brook, a former welterweight titlist, with a fourth-round knockout while defending his 147-pound title.

Personally, I have Canelo Alvarez as the top pound-for-pound fighter, but a case certainly can be made for Crawford. And even though Crawford, promoted by Top Rank, said earlier this week that he doesn’t need the PBC-affiliated Spence for his own legacy—a theory I wholeheartedly disagree with—Spence recently told me he thought a fight between tehm could be made in 2021. Assuming Spence beats Danny Garcia next month, it’s a fight that needs to happen ASAP.

“I was just trying to gauge the distance,” Crawford told ESPN afterward. “He had good distance. I was trying to find my rhythm. That’s why it was so competitive at first. I couldn’t get my shots off first.”

After dispatching Brook, Crawford said he wants to secure a Manny Pacquaio fight. When asked about Errol Spence, Crawford—who reportedly made a $4 million purse compared to Brook’s $2 million payday—looked toward his promoter, Bob Arum.

“Let me tell you something: Spence and Garcia are fighting in December,” Arum said. “If they really want to make a big PPV, I’ll put Terence in with them one at a time. He’ll beat them on the same night. He’s far and away the best welterweight in the world.”

Asked about his own perspective on his loss, Brook said, “I obviously got caught with a shot I didn’t see. … The better man won tonight.”

The telecast, though, got off to a rough start. Since the University of Florida football team’s blowout of Arkansas went long on ESPN, the telecast started 28 minutes late. People were not pleased.

Then, the main event was delayed further when controversy surrounded the Joshua Franco-Andrew Moloney undercard bout. After the fight was stopped before the third round began, the Nevada State Athletic Commission tried to to determine whether Franco’s swollen eye that caused the fight to be stopped was the result of a Moloney punch or a head clash.

At one point, ESPN’s announcers—Joe Tessitore, Andre Ward and Tim Bradley—were dumbfounded at how long the decision was taking.

Eventually, the fight was declared a no decision, even though there was plenty of video evidence that the swelling was caused by a Moloney jab. It left a sour taste in the mouths of many boxing fans who were following along online.

At 11:52 p.m. ET, 112 minutes after the broadcast was supposed to begin, the bell finally rang to start the first round of Crawford vs. Brook.

Brook edged Crawford early in the fight with a solid jab (I actually gave Brook the first two rounds), but when Crawford shifted to his left-handed stance in the middle of the second round, he began finding more success.

Then, Crawford blasted Brook with a nasty right hand about 40 seconds into the fourth round and referee Tony Weeks ruled it a knockdown as Brook fell into the ropes. A few seconds later, Crawford poured it on and Weeks stopped the fight. It was a spectacular finish.

At this point, it’s unclear if Crawford and Spence (and Top Rank and PBC) can come to an agreement, but Arum made it sound as if Crawford would next turn his attention to Pacquiao.