Target said it created a safe and inspiring environment for shoppers, and it paid off.

Comparable sales at Target Corp. TGT in the combined November and December period grew 17.2%, driven by a 4.3% in traffic, and a 12.3% increase in average ticket, bucking the malaise many retailers have been exhibiting throughout the Covid-19 pandemic, including the holiday season.

Target saw strength at its brick-and-mortar locations, where store-originated comparable sales grew 4.2%, and digital, which jumped 102%.

Target’s announcement included sales only in November and December. The retailer’s fiscal fourth quarter ends on January 31. It will report the full quarter’s results on March 2 during a virtual investor’s day.

The retailer also said it plans to close its stores on Thanksgiving Day this year, an indication that the cadence of holiday shopping may be changing permanently due to the pandemic.

Craig R. Johnson, president of Customer Growth Partners, said achieving online growth has been easier during the coronavirus pandemic when many stores closed or are operating at reduced capacity, but both online and brick-and-mortar strength is no easy feat. “Target’s in-store growth and online growth is exceptional nowadays,” Johnson said. “Their business was good pre-Covid-19, but now, it’s exceptionally strong.”

Target has recorded $6 billion in market share growth as other retailers have faltered or closed permanently.

When the retailer announced its second-quarter earnings, which were the strongest in the company’s history 50-year history – store comps grew 11% and digital sales rose nearly 200% –Target chairman and CEO Brian Cornell, said, “We’re taking share from specialty and department stores and some of our traditional competitors, including clubs.”

From Silver Bullets To Strategic Overhauls: 9 Retail Trends, Tactics & Innovations For Success In 2021

The Best Running Clothes To Smash Your Couch To 5k Plan

“Target’s had a huge gain in market share,” Johnson said. “They may not keep 100% of it after the pandemic when other stores start reopening. It will be like a ratchet effect, it may go four notches up, but then it kicks back a little bit.”

Sales in November and December on same-day services such as Order Pick Up, Drive Up and Shipt grew 193%. Drive Up, where fresh and frozen groceries were recently added, advanced more than 500%, and Shipt, which is owned by Target, grew more than 300%. Target said millions of consumers tried the services for the first time in November and December, and came back in record-breaking numbers, especially in the weeks leading up to Christmas. In December alone, consumers purchased 150 million items from Drive Up and Order Pickup, almost four times more than the same time period last year. 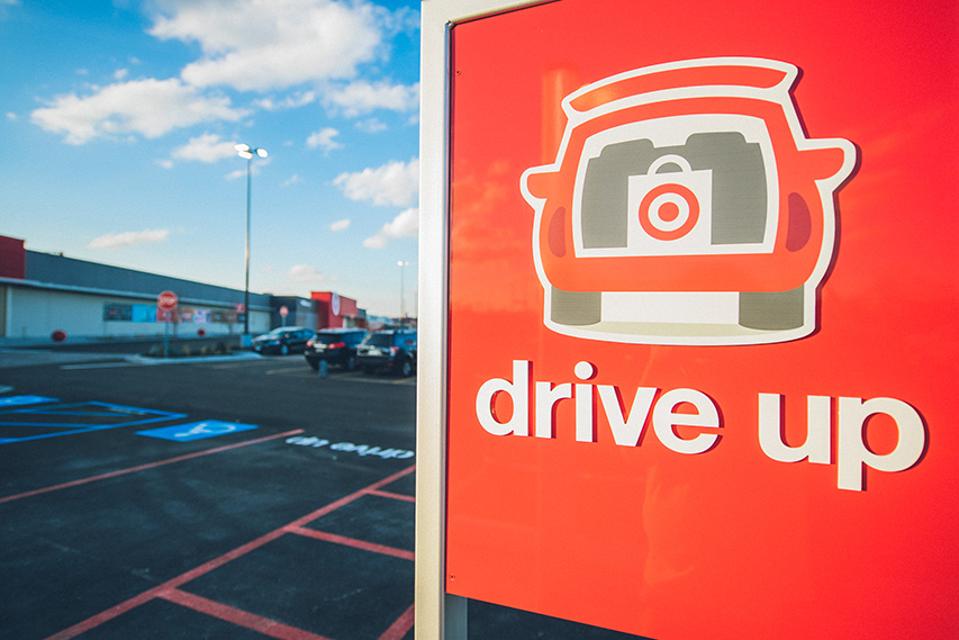 Target’s Drive Up service was wildly popular during the holiday season.

“At a time when being just a place that sells brands is perilous, Target has proved once again that it is a viable brand,” said Carol Spieckerman, president of Spieckerman Retail. “Target has wisely departed from its insular past and embraced strategic partnerships outside of the designer hook-ups it’s always been known for. Target has been less aggressive than Walmart on the acquisitions front, but has made up for it through partnerships.”

“Throughout the holidays, we delivered joy for holiday shoppers while focusing on safety, adjusting promotions to reduce crowding while delivering easy, contactless fulfillment options through Drive Up and Shipt,” said Cornell. “We’ve seen continued strong sales trends in the new year, and as we turn to our 2021 plans, our team is focused on continuing to build on the guest engagement and significant market share we gained throughout 2020. 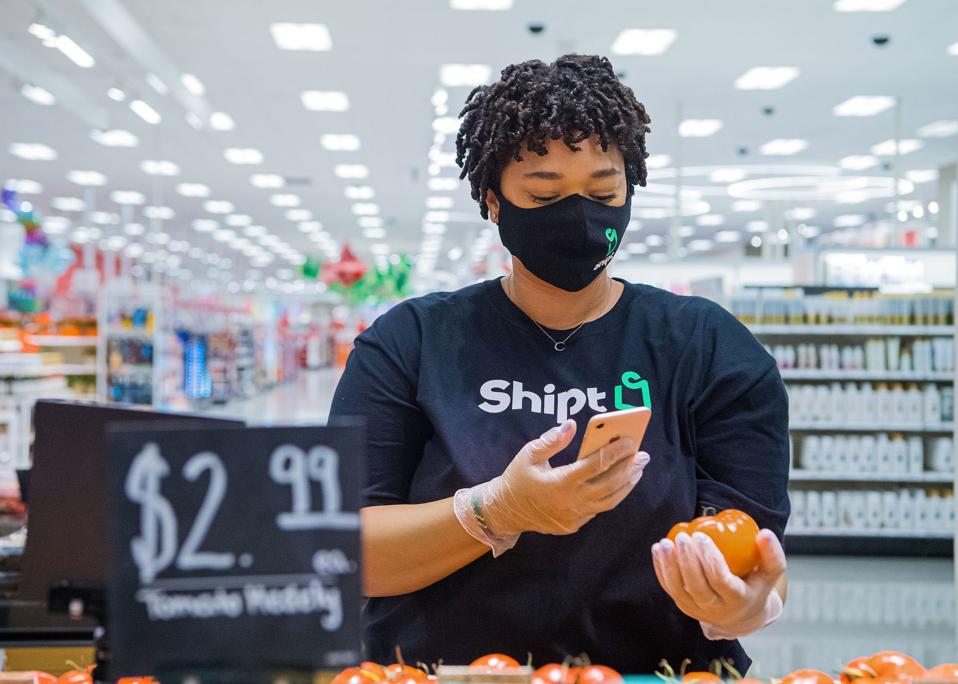 A Shipt employee choosing produce for an order.

“The momentum in our business continued in the holiday season with notable market share gains across our entire product portfolio,” Cornell said. “We’re very pleased with our results, and the strength of our performance is a reflection of the tireless work of our team to support our guests through a safe, convenient and inspirational experience.”

Unlike most retailers, Target has been opening new stores, smaller flexible format units in New York City, Chicago, Houston, Austin, Los Angeles and Las Vegas, among others, and during the health crisis. While sales at stores open less than a year aren’t factored into comparable-store sales data, the retailer is using the opportunity to capture market share.

“As we talk about increasing our trust and relationships with guests, bringing a new store to a neighborhood certainly plays an important role,” the retailer told Forbes, noting that it opened 30 new smaller flexible format stores during the pandemic, including its first store on a college campus at the University of California, San Diego.

“Target has played a mean game of catch-up on the convenience front, following Walmart’s WMT example by making shopper choice a top priority rather than attempting to force shoppers into options that are easier, or more profitable – for Target,” Spieckerman said. “Although Walmart’s Neighborhood Market format is still going strong, Target has been bolder on the small format front out of necessity. Target’s stores aren’t as ubiquitous as Walmart’s and many of its customers are still too far away from stores. Moving into Manhattan and courting the college crowd makes a lot of sense for Target. Even so, Target and Walmart understand that many markets can be addressed digitally. They’re both great examples of how business model diversification, not store proliferation, is driving retail growth.”

Johnson said Target is filling a gap in urban markets such as Manhattan, where supermarkets typically aren’t well stocked and exorbitantly expensive. “Target is getting better at [building and operating] small format stores. It all hinges on grocery. That’s what separates the winners from losers – the fresh produce and meat. That, and a good selection of adult beverages. Every Target in Manhattan is well-supplied with good adult beverages.”

The Minneapolis-based retailer registered growth in all five of its core merchandising categories, with the strongest gains in home and hardlines, which each saw comp-store sales gains in the low-20% range, the latter, reflecting mid-20% growth in electronics. Food and beverage comparable sales growth was in line with the company average, while beauty and essentials delivered growth in the low teens, and apparel notched a high-single digit increase.

“The acknowledgement that businesses like pharmacy are best left to the experts – CVS – allowed Target to focus on what it does best,” Spieckerman said. “Target’s decision to give some love to categories outside of its apparel and home comfort zone has really paid off as well. Its pre-pandemic focus on grocery was a prescient move that ensured a steady flow of traffic and one-stop-shop relevance throughout the COVID-19 outbreak.” 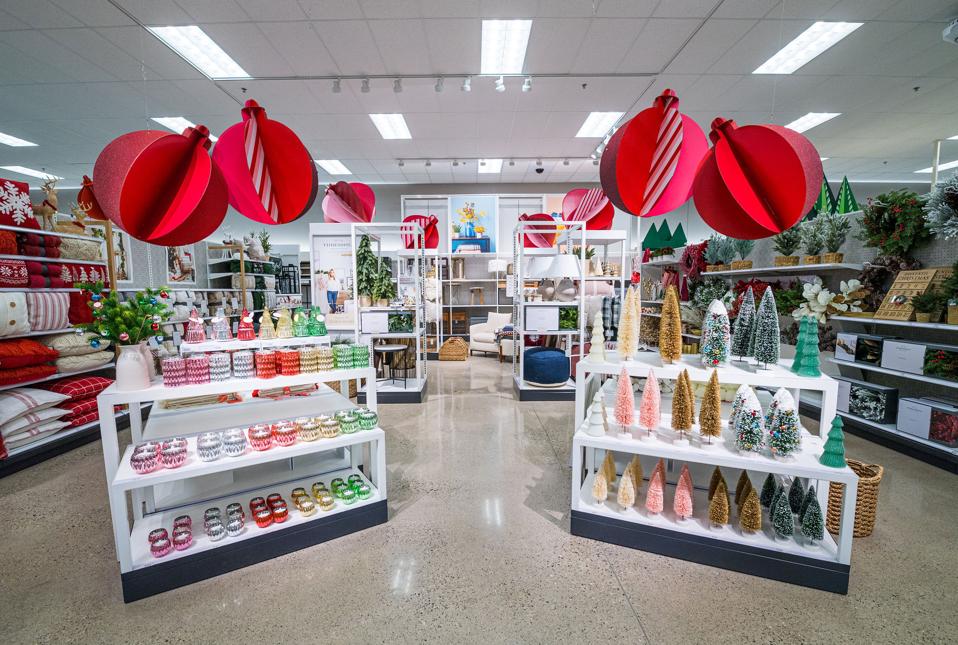 The home category at Target benefitting from consumers’ increased interest in feathering their nests … [+] during Covid-19.

It’s no surprise that home is a strong category during the pandemic when consumers are spending more time there and taking stock of their surroundings. “Home has been very hot across the board,” Johnson said. “At Williams-Sonoma WSM , TJX’s Homegoods, and the home improvement category. Anything having to do with the home is hot.”

Matching family sleep sets were popular during during the holiday period, but Cornell said consumers have been warming up to Target’s apparel strategy, even during the pandemic. When 56 million K- through 12 students waited to learn their fate in August, and 66% were told they’d start the school year remotely, Cornell said he thought, “We’re going to have to extend the back-to-school season and adjust by market. Being flexible and adaptable has really been the key to our success.”

Tesla, GameStop, Coherent: What to Watch When the Stock Market