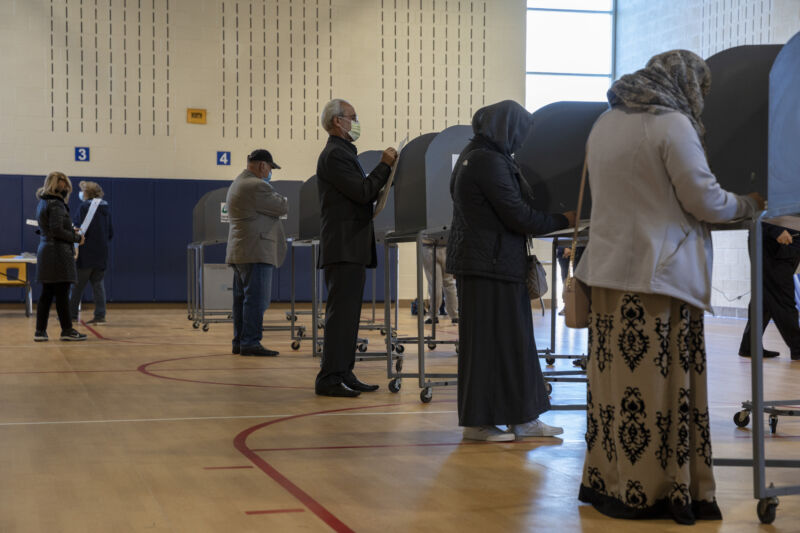 Enlarge / Voters in Michigan, one of the states where residents received misleading robocalls about the election, casting their ballots on November 3, 2020.
Elaine Cromie | Getty Images

Both the FBI and the Federal Communications Commission are investigating a series of suspicious robocalls that warned recipients to “stay home” on Election Day in an apparent attempt at voter suppression.

Voters around the nation have received approximately 10 million of the automated “stay safe and stay home” calls, The Washington Post was first to report. YouMail, which offers smartphone apps for blocking spam calls, told the Post that the calls have been received in roughly 88 percent of all US area codes since the summer.

“If you wanted to cause havoc in America for the elections, one way to do it is clearly robocalling,” YouMail CEO Alex Quilici told the Post. State and federal officials evidently agree.

Voters have also been receiving suspicious and deceptive text messages about the election, both The Washington Post and New York Times recently reported.

“Dearborn voters, text messages are reportedly being sent to trick you into thinking there are ballot sensor issues,” she said Monday. “Do not fall for it, it’s a trick!”

Tuesday, Nessel followed up with another message, warning, “We received reports that an unknown party is purposefully spreading misinformation via robocalls in Flint in an attempt to confuse voters there. Don’t fall for it.” She later added, “Law enforcement will never contact you and attempt to deter you from voting. If you receive a call like this, we want to know about it.” She provided a tipline phone number.

A senior official with the Department of Homeland Security confirmed to the Post that the FBI is investigating the robocalls through its “normal criminal process.”

The FCC, as a body, did not say if it was an opening an investigation into the matter. Commissioner Geoffrey Starks, however, did.

“I’m going to get to the bottom of this,” Starks said in a tweet Tuesday afternoon. “Illegal robocalls and robotexts that seek to impact our elections are unacceptable.”

Commissioner Jessica Rosenworcel, the other Democrat on the five-member commission, also made a post asking recipients of suspicious calls such as the ones described in the Washington Post story to file a complaint with the FCC.

The calls and texts are just two of many vectors through which rampant disinformation about the election has been traveling. Voters in swing states have been receiving the brunt of it, but they are not alone. False claims about polling locations, voting by mail, and interference by foreign or domestic actors have been widespread, and election officials around the country have been overwhelmed with worried calls. Social media outlets are trying to keep up, but it’s going to keep being a long, weird road for quite some time.