It may be possible for current officials to take some big steps setting
Fannie Mae
and
Freddie Mac
on a path to exiting government control before President-elect Joe Biden takes office. But like anything having to do with the housing giants, it won’t be simple.

The completion of a new capital rule for Fannie and Freddie in November creates one complexity. Under the new requirement, at their combined size Fannie and Freddie would need to collectively have about $280 billion in equity capital—on the order of $250 billion more than they currently do. 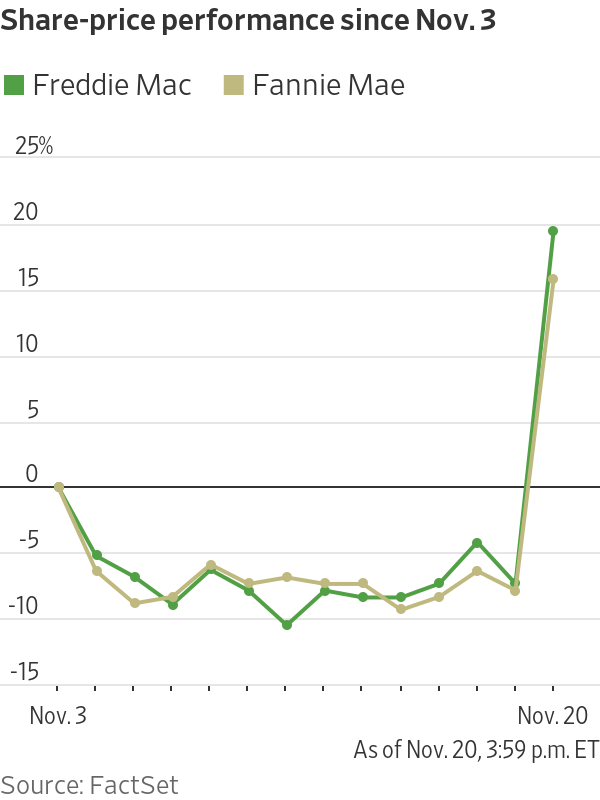 This means some kind of workaround to bridge the capital gap for the time being may be needed. According to the new capital rule, that could take the form of a temporary consent agreement if the government were to end conservatorship. The terms of such a decree might have big consequences for Fannie and Freddie’s business, and for potential future investors.

Then there’s the question of what would be involved if the Treasury Department restructured its senior preferred stake in Fannie and Freddie, a step before the firms raise or retain additional capital. Treasury may seek to be compensated for providing a continued backstop to the firms by charging them a commitment fee. Still, any move that would amount to a significant alteration of the federal government’s balance sheet would surely attract interest at agencies beyond Treasury and the Federal Housing Finance Agency.

How holders of Fannie and Freddie securitizations known as agency debt would react to new arrangements is a source of debate. Some argue that markets would be satisfied by some kind of commitment-fee funded arrangement, while others argue it is a big risk to move forward without supporting legislation by Congress guaranteeing the debt.

Don’t forget about the Supreme Court, either. It is set to soon hear arguments not only on whether FHFA Director Mark Calabria is removable by the president at any time, but also on some shareholders’ longstanding claims against the government for sweeping Fannie and Freddie’s profits.

The stakes for investors of all kinds in this process are also unusually high right now. How the firms do business under any new arrangement would be of huge interest at a delicate time in the U.S. economy. Consider the firestorm and home-lender stock swoon that was ignited in August by the FHFA’s proposed fee to help offset Fannie and Freddie’s pandemic obligations. FHFA responded by pushing back the move to December, and exempting certain loans. That was a baby step compared with the kind of changes that might ultimately result from Fannie and Freddie’s transformation.

It would be understandable for Mr. Calabria and Treasury Secretary Steven Mnuchin to not want to leave so much work unfinished on housing finance reform. But while aggressive steps are possible, a more measured approach may be more likely.

Covid-19: Twelve key milestones in a year like no other