It took a while, but workers stuck at home seemed to realize that good sound was worth paying for.

That at least was what strong quarterly results from
Sonos,
reported late Wednesday, suggest. After two straight quarters of sales declines, the maker of high-end wireless speakers saw revenue jump nearly 16% year over year to $339.8 million for its fiscal fourth quarter ended Oct. 3. That was 14% ahead of Wall Street’s revenue target for the period—the largest beat Sonos has managed since going public in 2018, according to FactSet. The company also projected better-than-expected revenue growth of 11% for the current fiscal year. 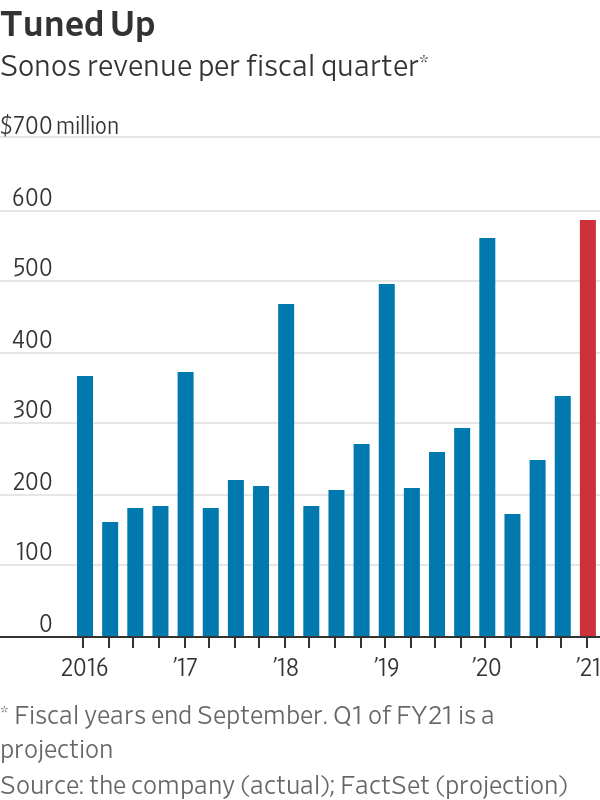 Sonos shares broke the sound barrier on the news Thursday, soaring 30% to set a new record for a single-day gain by the stock. That might look a bit frothy if not for the fact that Sonos had some catching up to do, having lagged behind the S&P 500 before the results. Even with Thursday’s surge, Sonos shares still trade at less than two times forward sales—a multiple common to those in the highly cyclical consumer hardware market.

Katy Huberty of
Morgan Stanley
noted Thursday that the recent results make a good case for rerating the shares.

Sonos added 1.8 million net new households in the recently ended fiscal year, up from 1.7 million the year before. And the company is generating strong repeat business, with existing households accounting for 41% of new product registrations compared with 37% the year before.

Such customer loyalty helps Sonos withstand a growing competitive onslaught from technology giants offering much cheaper, voice-enabled speakers. Apple Inc., Google and Amazon.com have all launched new $99 speakers over the past two months, undercutting the lowest-priced option at Sonos by 45%.

But smart speakers also bring privacy concerns, and they are no longer a novelty—Amazon launched the first Echo in late 2014. Sonos still has managed to boost revenue every year since then, while keeping its average selling price well above the $200 mark.

Big tech’s subsidized microphones aren’t worth the price to some.