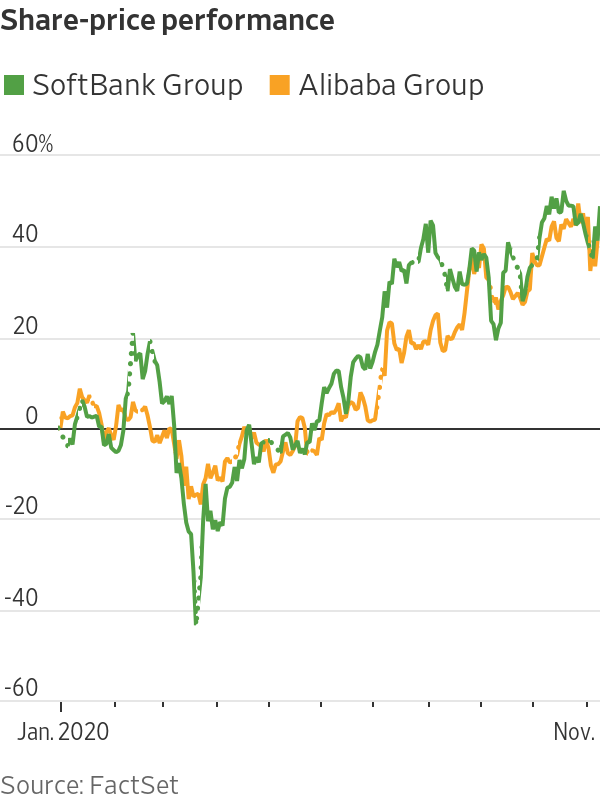 SoftBank has gone from hell to heaven in the span of a year, thanks to the tech stock boom.

The Japanese technology conglomerate reported a net profit of $6.1 billion for the quarter ended in September. That is a big turnaround from the $6.4 billion loss a year earlier, when SoftBank was forced to write down the value of its stake in WeWork after investors shunned the initial public offering of the office-sharing company.

Its Vision Fund unit, including the original fund of nearly $100 billion and the $5 billion successor, booked $10.5 billion of investment gains last quarter, the best ever since the fund’s inception in 2017. Chinese online real-estate broker KE Holding, known as Beike in Chinese, was a standout performer: The stock has nearly quadrupled since its New York IPO in August. The investment has netted Vision Fund 2, which doesn’t have any external investors, around $5 billion as of September.

SoftBank has loaded up more on listed companies, too: As of September it owned around $17 billion worth of technology stocks, including $6.3 billion in
Amazon.com
and $2.2 billion in
Facebook.
It also bet on technology stocks using equity options. That seems a distraction from its vision to identify more promising startups.

SoftBank stresses itself as an investment company, instead of an operating company. It has stopped disclosing operating profit since this fiscal year. SoftBank’s chairman, Masayoshi Son, said net asset value is the only performance metric investors should look at, instead of the more volatile quarterly profit. Mr. Son said SoftBank’s NAV has risen from $200 billion to $258 billion from March to September.

He has a point. The company doesn’t have much left to operate after selling carrier Sprint to
T-Mobile
and reducing its stake in its domestic telecom unit. It is also in the process of selling British chip designer Arm Holdings to rival Nvidia.

But a big part of the gains in SoftBank’s net asset value still comes from only one stock: Chinese e-commerce giant
Alibaba.
Alibaba had a phenomenal year, gaining 41% this year so far. SoftBank’s Alibaba stake is worth around $180 billion—bigger than its own market value. SoftBank has essentially become a proxy for Alibaba stock.

SoftBank’s own share price has gained 48% this year, slightly outperforming Alibaba’s. That’s partly because the company has announced a record 2.5 trillion yen ($24 billion) of buybacks this year and plans to monetize 4.5 trillion yen of  assets, including part of its Alibaba stake.

SoftBank is riding high along with the rest of the tech investor universe right now. But much of its fate is still tethered to Alibaba, its most successful investment ever.

With Biden win, some Iranians lose hope ayatollahs will fall

Another Slump: FC Barcelona Versus Cadiz Result And What We