Shippers have sailed ahead this year even through the rough seas of the Covid-19 pandemic. Strong stimulus-driven demand in rich countries, resurgent manufacturing in China and a sleeker industry structure mean that strong performance could continue for a while yet.

Rebounding trade is a big tailwind. Average spot container freight rates from Shanghai to many regions including the U.S., Australia and South America have hit all-time highs in recent weeks, according to Jefferies. 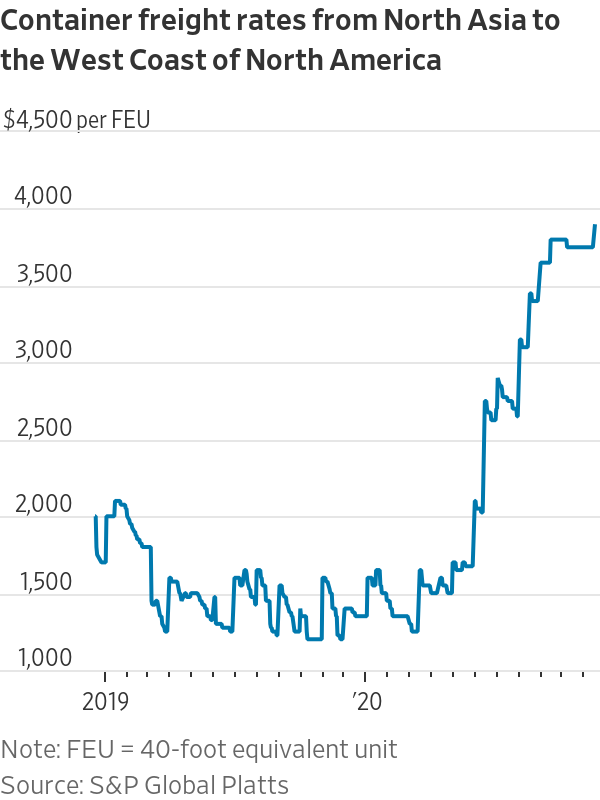 Rates from North Asia to the West Coast of North America were $3,900 per 40-foot equivalent unit this week, more than double a year earlier, as assessed by S&P Global Platts. Cargo throughput at Chinese ports has bounced back after a brief dip at the beginning of the year due to the coronavirus pandemic.

U.S. retailers are stocking up inventories ahead of the holiday season, but the risk of potential lockdowns and the boom in e-commerce might have stoked demand further. Shipments for medical equipment, work-from-home electronics and home improvement tools have created additional orders. The demand for high-value goods from China is so strong that some container shippers have returned empty boxes to Asia to capture the higher freight rates.

The surge might not last long, but the shipping market this year hints that industry consolidation in recent years might have started to solve the oversupply problem that has plagued the industry for a long time. Container shippers have merged or formed alliances so that 80% of the market is now covered by three alliances: 2M, THE and Ocean. Freight rates remained stable earlier this year as shippers shared vessels and cut back supply in the face of falling demand due to the pandemic. These alliances have voided 400 sailings—or about 10% of capacity—from active service, according to S&P Global Platts.

Container shippers, long ignored by investors, have become unlikely market darlings. Shares of China’s state-owned Cosco Shipping Holdings, the country’s largest shipping company, have hit their highest level since 2015 after more than doubling this year. Higher freight rates and lower oil prices have juiced earnings: Net profit for the quarter ending in September grew 82% from a year earlier, the company said last month. Cosco has been active in the industry consolidation; it is part of the Ocean Alliance with CMA CGM and Evergreen, and it also bought a majority stake in a smaller rival,
Orient Overseas,
in 2018.

One big risk comes from Chinese regulators, who might become uneasy about the impact of high freight rates on exporters. But for now, a more consolidated shipping industry has finally moved out of the slow lane.