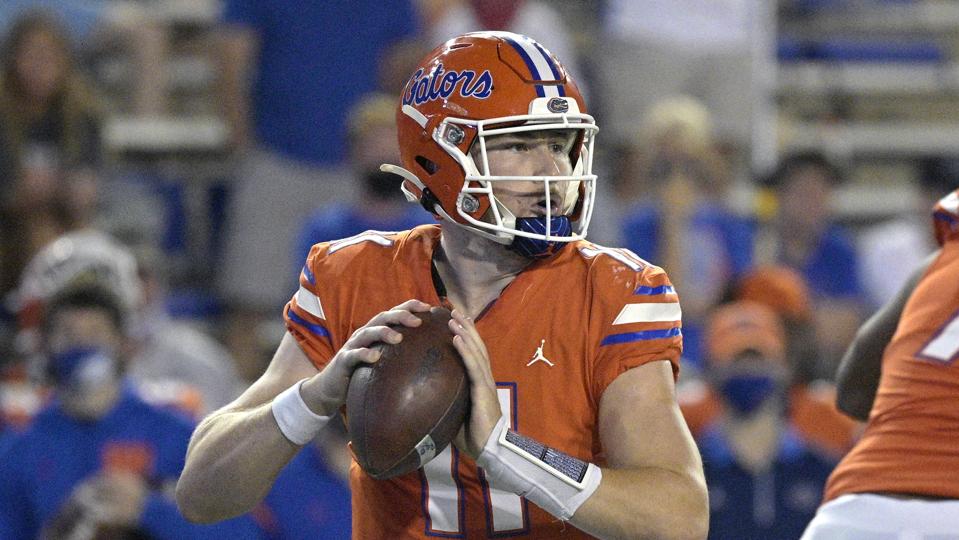 If the final few weeks of the regular season continue along the current trajectory, not only would Alabama and Florida meet in the SEC championship game with a trip to the College Football Playoff on the line, but the matchup could be a Heisman showcase between Mac Jones and Kyle Trask.

True, there are games to be played and other candidates, led by Clemson’s Trevor Lawrence and Ohio State’s Justin Fields, will certainly have their say. It is easy to peek ahead, however, to what could take place on December 19 in Atlanta.

That is especially so after Trask had the stage to himself last Saturday night as he lit up Arkansas while Jones, Lawrence, Fields and other Heisman candidates such as Iowa State’s Breece Hall and BYU’s Zach Wilson were inactive due to virus-related postponements or bye weeks.

The fifth-year quarterback heard the Gator faithful chant “Trask for Heisman.” That’s what happens when you throw for 830 yards and 10 touchdowns the first two weeks of November against what was then-No. 5 Georgia and a much-improved Arkansas team quarterbacked by the player (Feleipe Franks) Trask took over for last season. Funny how things work out sometimes.

Trask, who is seventh nationally in pass efficiency and third among quarterbacks who have played at least four games, had as many incompletions as touchdown passes (six) in the 63-35 victory over the Razorbacks. He has an eye-opening 28 TD passes, the most by an SEC quarterback after six games, and has thrown at least four in each game.

No wonder Trask is hearing the Heisman chants. Just do not expect him to make much of it. Rather, as he repeated during his press conference following the win over Arkansas, having more points than the opponent at the end of each game is most important.

“Yeah, I heard it,” he said. “Like I said, just focused on winning games.”

As for averaging nearly five TD passes per game?

“The stats are cool, but they don’t always win games,” he said. “We are here to win a national championship. That is the team’s goal just like a lot of other teams. To do that, you have to do a great job of winning games and that is all I am focused on now.”

Trask will have to make do for a second straight week without tight end Kyle Pitts, who was ruled out (concussion resulting from targeting vs. Georgia) for Saturday’s game at Vanderbilt. With a group of receivers that includes Kadarius Toney, Trevon Grimes, Jacob Copeland and Justin Shorter, plus backup tight ends Keon Zipperer and Kenmore Gamble, Trask has plenty of dependable targets.

“I see how hard they work throughout the week, what kind of plays they can make and the speed they got,” said Trask. “When I am dropping back, I have complete trust in my guys.” 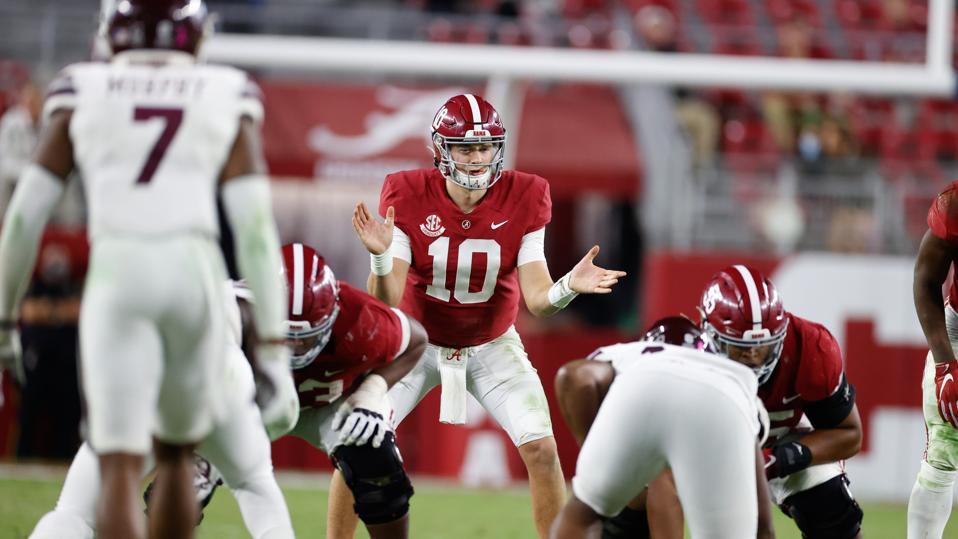 Alabama’s Mac Jones is fourth in the nation in pass efficiency and has completed nearly 80% of his … [+] passes for the top-ranked Crimson Tide. (Photo by UA Athletics/Collegiate Images/Getty Images)

Jones, a redshirt junior, gave his Heisman stock an early boost when he had his way with then-No 13 Texas A&M in Tuscaloosa on October 3. That afternoon he threw for 435 yards and four touchdowns. His candidacy soared following a 417-yard, four-touchdown performance against visiting and then-No. 3 Georgia two weeks later.

Jones heads into Saturday’s game against visiting Kentucky ranked fourth nationally in pass efficiency and first among quarterbacks who have played at least four games. In six games he is averaging 366 yards passing, has completed 78.5% of his attempts and has 16 touchdowns and only two interceptions.

Like Trask, Jones lost the services of one of his top pass catchers when receiver Jaylen Waddle (broken ankle) went down against Tennessee on October 24. Senior DeVonta Smith, who led Alabama in receiving yards and touchdown receptions last season and caught all four of Jones’ TD passes in a November 7 rout of Mississippi State, leads an otherwise young group of receivers that includes sophomores John Metchie III (22.3 ypc) and Slade Bolden, who caught six passes against the Vols after Waddle was lost. Other young receivers will get their chance.

“All of our young receivers have done a good job,” said Jones, following the win over Tennessee. “All those guys have to be ready to play. You see every year somebody that is a younger player has to step up and make plays. They know they have to be ready and I think they will be. Right now, I feel like we have the best group out there.”

Trask and Jones took over their respective offenses unexpectedly last season. Franks was the Gators’ starting quarterback before he dislocated an ankle at Kentucky in the team’s third game. Jones was pressed into service toward the end of the season when Tua Tagovailoa’s spectacular collegiate career came to an end when he dislocated a hip at Mississippi State.

More than year later Jones and Trask could meet for the first time and do so on a conference championship stage with major Heisman implications.