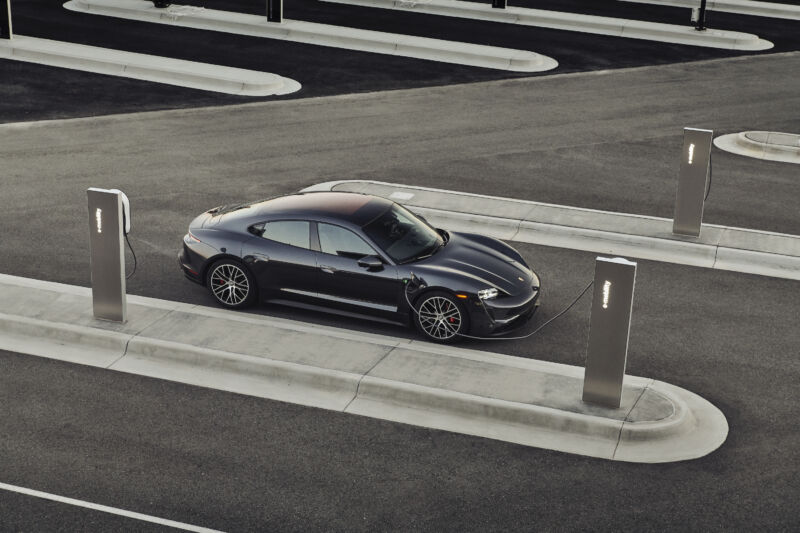 Enlarge / Charging a MY2021 Taycan at an Electrify America station (not pictured) will be as easy as plugging it in.
Porsche

Fast charging your electric vehicle at an Electrify America station just got a lot more seamless—at least for some electric vehicles. That’s because the company has now implemented Plug&Charge, the user-friendly name for the ISO 15118 standard that enables an electric car to talk to the charger and handle authentication and billing.

If you ask any analyst, they’ll tell you that Tesla’s Supercharger network is one of the company’s most valuable assets. For one thing, they’re everywhere in the United States, enabling the kinds of road trips that always come up as an excuse as to why electric cars can’t work. But it’s not just the coverage—a Supercharger is effortless to use. You turn up and plug your car in, and it does the rest. Your Tesla tells the Supercharger who you are and whether you have to pay, and it deals with any billing. The whole arrangement really is delightfully easy.

Fast charging a non-Tesla EV is invariably a less seamless experience. You can carry a dongle on your keys, or use an app or your phone to authenticate with the charger. But in my experience, sometimes neither of those work, and you end up having to call the phone number on the side of the big humming box and ask them to turn it on for you from their side. Even when it does work smoothly, there’s still some faffing about, poking a touchscreen that may not be the world’s most responsive.

There is a catch, however. Just implementing ISO 15118 on the charger side is no good; it needs to be enabled on the car side as well. That’s beyond the scope of almost all (non-Tesla) EVs on the road already, at least without an update. The good news is that model year 2021 Porsche Taycans, Lucid Airs, and Ford Mustang Mach-Es will all support Plug&Charge, and I would be astounded if more OEMs didn’t add support in the near future.