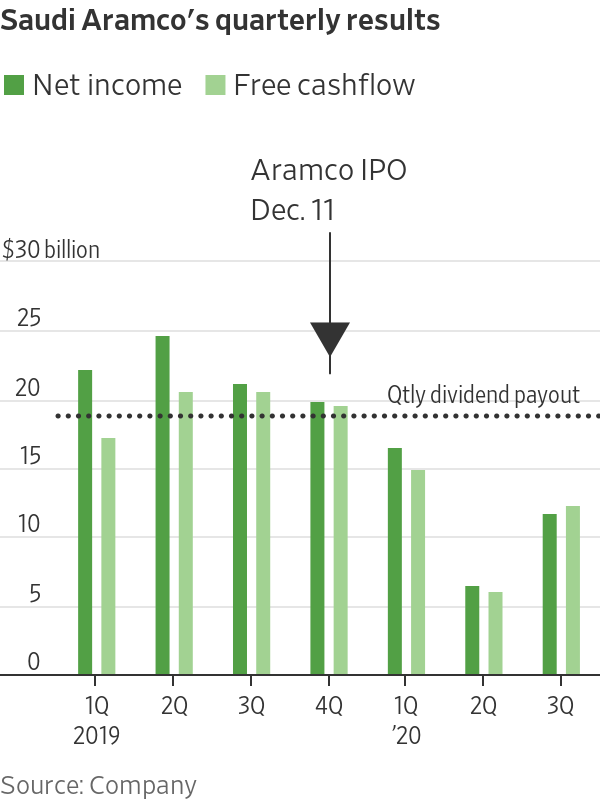 Oil producers are used to price cycles, but this one has been a doozy and hopes are fading that the worst has passed. Saudi Aramco has few easy ways to offset the pain.

The world’s largest oil producer reported better-than-expected results for the third quarter on Tuesday. Higher average prices—$43.60 a barrel, up from $23.40 in the prior period—helped cushion painful margins in the refining and chemicals businesses as well as lower production volumes.

But the fourth quarter is turning out less well. After months of relative stability, crude prices wobbled last week and touched a five-month low on Monday. Rising Covid-19 infections globally and new lockdowns have raised concerns that demand for oil will fall, even as supply creeps up.

In April, the Organization of the Petroleum Exporting Countries, Russia, the U.S. and a group of other countries agreed to a record production cut totaling 9.7 million barrels a day, which helped stabilize prices. Nearly a fifth of that cut was reversed in the summer, though. Meanwhile, Libyan output is creeping up this year; Canada and Norway both look set to increase production; and recent U.S. oil output has exceeded expectations.

OPEC+ had hoped to open the taps by another fifth this January, but that now looks off the table. Instead, the cartel is moving in the opposite direction: The Wall Street Journal reported Tuesday that Riyadh and a number of other OPEC members were considering additional cuts. The oil price rallied.

Aramco is particularly exposed to the vagaries of the oil cycle because it often has to cut production to help OPEC stabilize prices. It has sought some protection through diversification. 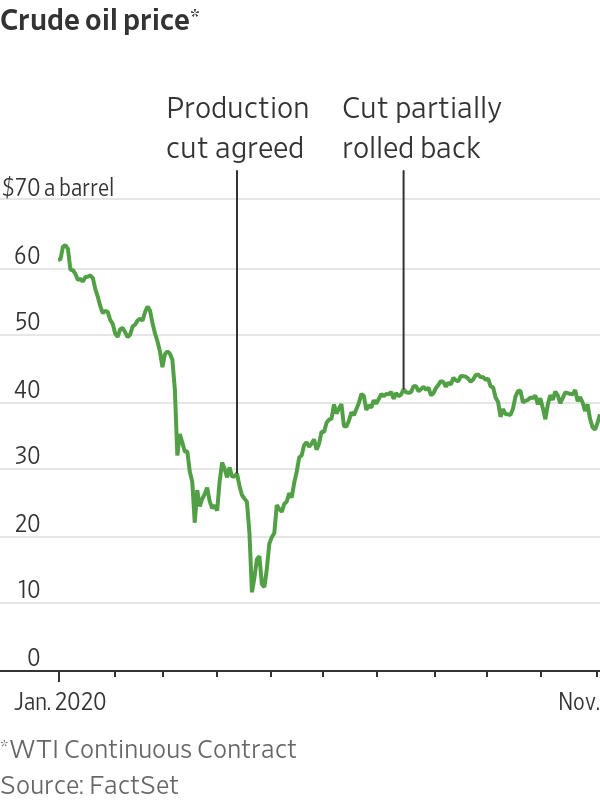 For example, Aramco bought chemicals giant Sabic this year, taking it into plastics and other oil-based goods. Unfortunately, others have gotten excited about petrochemicals too, leading to overcapacity. Covid has increased demand for packaging and health-care products, but not enough to offset hits to auto makers and builders and the long-term trend toward recycling. The deal also saddled the company with debt. Refineries have suffered a similar fate. Aramco is reconsidering a number of proposed projects.

The forces that propelled Aramco’s growth from a single well to the biggest oil producer in the world are changing underfoot. Now that the company has sold shares, can it sustain the kind of growth needed to keep investors happy? WSJ explains. Photo: John Moore/AP (Originally Published January 31, 2020)

One bright spot is the company’s recent shipment to Japan of 40 tons of “blue” ammonia, which has green credentials because it is made using carbon-capture technology. This was touted as the first commercial-scale delivery in the much-hyped hydrogen economy—ammonia is a hydrogen derivative that is cheaper and easier to transport. It is a promising start, but many others have plans to spend billions of dollars here to tap demand that isn’t yet certain.

Aramco’s more immediate problem is that it has even less control over its fate than other producers. The company’s production levels will depend on the OPEC meeting at the end of the month, and the signs aren’t promising. For all the efforts to broaden the business, Aramco looks as exposed as ever to the messy geopolitics of oil.