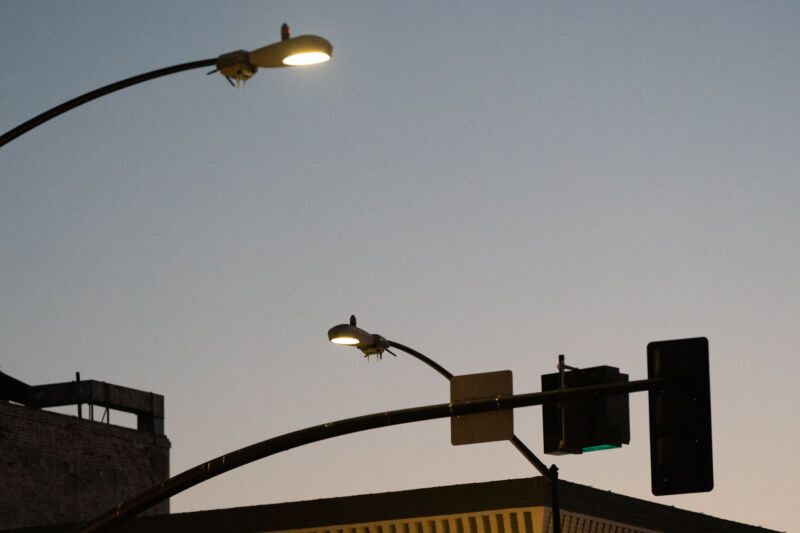 Over the past few years, streetlights in the city of San Diego have become “smart,” equipped with a slate of cameras and sensors that report back data on the city and its denizens. Following protests from privacy activists, the city mayor ordered the network disabled for the time being—but it turns out that city staff can’t turn the cameras off just yet without plunging the city into literal darkness.

Thousands of streetlight cameras were supposed to be disabled this fall, the Voice of San Diego reports, but there is no software switch for doing so. In lieu of disabling the cameras, the vendor responsible for them at the time instead simply cut off the city’s network access to the devices.

The Smart Streetlight project began five years ago, in 2015, when San Diego Mayor Kevin Faulconer announced (PDF) a new “partnership” with GE Lighting to deploy “a software-defined lighting technology that will help San Diego solve some of the city’s infrastructure challenges.”

As the city government describes the proposal, San Diego’s initial plan to convert to LED streetlights “evolved” to include a “connected digital infrastructure” full of sensors and cameras. More than 3,000 of the sensor-enabled smart lights were installed all around the city (map), and the information they collect, theoretically anonymous, is supposed to help the city gain valuable data used for urban planning purposes, such as traffic management.

But wait, you also get…

If there’s anything we’ve learned from Amazon Ring, it’s that law enforcement tends to view networks of connected cameras as too rich a target to ignore. So, too, in San Diego: local police used footage from the citywide surveillance network at least 400 times since 2018.

Privacy and civil rights advocates pushed back through 2019. A group called San Diegans for Open Government sued the city last December, alleging that the city was violating the law by failing to provide information about or records from the Smart Streetlight Program.

The San Diego City Council unanimously suspended funding for the Smart Streetlight program in July, and Faulconer in September ordered the network to be shut down until such time as city leadership could craft ordinances governing the use of such surveillance technology.

San Diego’s original contract was with GE Lighting. GE, however, has been divesting businesses left and right in the past few years to help manage a frankly staggering amount of corporate debt it had accumulated by 2017.

The CityIQ “smart city” platform GE developed went to a firm called Ubicquia in May of this year for an undisclosed sum. In September, a city committee was supposed to sign a new four-year contract with Ubicquia, but instead it dropped the deal at the last minute when the mayor’s office announced suspension of the program. Ubicquia, however, could not cut the cameras, because they share the same power supply as the lights themselves.

According to reporting by Voice of San Diego, Ubicquia CEO Ian Aaron told city officials, “If you want us to create a software switch we can write custom code and deploy it. The units were not designed for this originally.”

The cameras are still collecting footage, and that footage is retained for five days before being automatically deleted. The city had AT&T deactivate the data connection to the cameras instead so that the footage they are still connecting cannot travel to its servers.