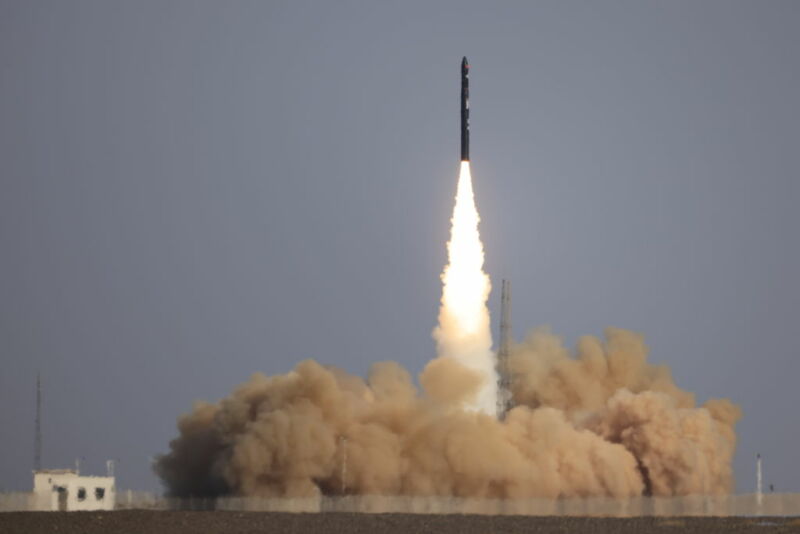 Welcome to Edition 3.23 of the Rocket Report! After virtually no vacation during this year of years, the author of this report is going to try to take most of the next two weeks off (Starship hops permitting). Because of this, the Rocket Report will not return until December 3. Thank you for your patience.

As always, we welcome reader submissions, and if you don’t want to miss an issue, please subscribe using the box below (the form will not appear on AMP-enabled versions of the site). Each report will include information on small-, medium-, and heavy-lift rockets as well as a quick look ahead at the next three launches on the calendar.

Relativity Space conducts full-duration engine test. Relativity Space said Monday that the company has successfully completed a full-duration test-firing of its Aeon 1 rocket engine, running it at full power for 187 seconds. The test at NASA’s Stennis Space Center in Mississippi took place with all of the engine’s key components—including turbopumps, injector, and combustion chamber—operating in a flight-like configuration. Surprisingly, the company met this milestone two months ahead of schedule.

A launch in 12 months? … In an interview with Ars, the company’s chief executive, Tim Ellis, attributed the Aeon 1 engine’s success to his team of engineers and technicians, software prediction models, and the ability to iterate quickly and print new 3D parts as needed. Success with the engine testing gives the company confidence that it can hit its target of launching the first Terran 1 rocket in 2021. The next step is integrated stage testing, which will happen next year, followed by a launch from Space Launch Complex-16 at Cape Canaveral Air Force Station in Florida.

Launcher conducts engine tests, too. This week, Ars took a deeper look at Launcher, a (very) small New York-based company working toward building a rocket engine and then a small rocket. Launcher only has eight US employees but appears to be making progress toward development of its E-2 rocket engine, which should boast 22,000 pounds of thrust. Launcher founder Max Haot says the company remains on track to complete development of the rocket engine for $10 million, by the end of next year.

A work in progress … Last month, the company took the first components of its E-2 engine to a test stand at NASA’s Stennis Space Center in Mississippi. During the first two series of tests, Launcher proved that the test stand and its fuel injector, which mixes liquid oxygen and kerosene, performed well. The third test was to assess performance of the engine’s 3D printed combustion chamber, where the fuels burn. This test did not go as well because three of the regenerative cooling channels were clogged and the chamber overheated. Launcher plans to return to Stennis in March.

The Rocket Report: An Ars newsletter

The easiest way to keep up with Eric Berger’s space reporting is to sign up for his newsletter, we’ll collect his stories in your inbox.
Sign Me Up!

Sold on solids … Galactic Energy is the fourth Chinese private launch company overall to make an orbital launch attempt, all with light-lift solid launchers. LandSpace made the first attempt in October 2018, with OneSpace following in March 2019. In July of last year, iSpace became the first to successfully achieve orbit with its Hyperbola-1 launch. Galactic Energy says it has raised $43 million in total since its establishment in February 2018. (submitted by platykurtic)

India returns to space with first launch since January. A Polar Satellite Launch Vehicle lifted off Saturday with India’s EOS 1 radar imaging satellite and nine ride-share payloads for customers based in the United States, Luxembourg, and Lithuania. The successful mission was India’s first launch in nearly a year due to delays caused by the coronavirus pandemic, Spaceflight Now reports.

Getting back on track … Indian officials halted launch operations at the Satish Dhawan Space Center earlier this year as COVID-19 began to spread. Meanwhile, government-imposed travel and work restrictions made it difficult to prepare for space missions on India’s launch schedule this year. ISRO, the Indian space agency, says it now has a series of missions scheduled soon after Saturday’s successful flight. (submitted by Ken the Bin and platykurtic)

Virgin Galactic sets launch target for VSS Unity. The company revealed that the launch window for its SpaceShipTwo test flight from New Mexico will open on November 19 and last for four days. SpaceShipTwo will carry revenue-generating payloads as part of the NASA flight opportunities program for this particular mission, Engadget reports.

On the financial side of things … Virgin plans to fly one more test mission with people on board the vehicle in early 2021 before flying Virgin founder Richard Branson on the first commercial flight during the first quarter of next year. The company bundled the announcement with the report for its financial results for the third quarter of 2020, reporting a net loss of $77 million, which was higher than its $63 million net loss for the previous quarter. (submitted by danneely)

Scottish spaceport may face judicial review. The largest landowner in Scotland, Wildland Limited, has called for a judicial review of the decision by the local Highland Council and Scottish government to proceed with the Sutherland spaceport project, The Press and Journal reports. Tim Kirkwood, chief executive of Wildland Limited said, “It is absolutely vital that planning applications of such scale and significance for environmentally vulnerable protected areas like the A’Mhoine Peninsula are subject to rigorous scrutiny at the planning application stage.”

Concessions already made … We should note that spaceport proponents already went through a major environmental impact study, as well as a public comment period. During this process, they made major concessions to local crofters (essentially, farmers) near the site in northern Scotland. Another contributing factor in this process may be that Lockheed Martin no longer appears to be interested in the Sutherland location. We don’t pretend to understand Scottish politics, but we’ll keep tabs on this regardless. (submitted by BH)

NASA formally certifies Falcon 9 and Crew Dragon. After years of design, development, and testing NASA has officially certified the first commercial spacecraft system in history capable of transporting humans to and from the International Space Station as part of the agency’s Commercial Crew Program. This occurred prior to the Crew-1 launch set for Saturday, November 14, and it also follows SpaceX’s successful demonstration flight of the Falcon 9 rocket and Crew Dragon spacecraft in May of this year.

Beginning of a new era? … “NASA’s partnership with American private industry is changing the arc of human spaceflight history by opening access to low Earth orbit and the International Space Station to more people, more science, and more commercial opportunities,” said Phil McAlister, director of commercial spaceflight development at NASA. “We are truly in the beginning of a new era of human spaceflight.” (submitted by Tfargo04 and Ken the Bin)

A five-year project … China’s first VTVL rocket is expected to be the Long March 8, a new liquid-kerosene/liquid-oxygen launcher which builds on technology developed for the Long March 7. Animations suggest the first stage will land on a sea platform with side boosters still attached. A first flight model of the Long March 8 is believed to have arrived at Wenchang Satellite Launch Center on Hainan island late last month. This first launch is likely to be an expendable version of the Long March 8. (submitted by Ken the Bin and platykurtic)

Large-rocket companies doubt small launch viability. Executives of major launch companies said they doubted there was sufficient demand for more than a few small-launch vehicle developers, citing their own efforts to provide ride-share launch services for smallsats. Tory Bruno, chief executive and president of United Launch Alliance, said a year ago he was tracking more than 120 ventures in the small launch vehicle or “microlauncher” market. There is now a “significantly smaller” number of such companies, he said during a panel discussion at Euroconsult’s World Satellite Business Week, SpaceNews reports.

A limited amount of demand … “I don’t expect that market to recover because that market would have been grossly—like order of magnitude—oversupplied had all of those startups succeeded,” he said. “There’s really only room, in our judgment, for maybe two or three of these.” Added Gwynne Shotwell of SpaceX, “The market needs to evolve. It’s a tough business.” Bruno, Shotwell, and the other big companies may be right, but it’s difficult not to see such comments as at least a little self-serving. (submitted by platykurtic)

About that $316 million launch contract for SpaceX. When the US Air Force announced August 7 that SpaceX received a $316 million contract to launch a National Reconnaissance Office satellite in fiscal year 2022, some industry observers were surprised by the large price tag. But much of this funding covers expenses for infrastructure and other items required under the National Security Space Launch Phase 2 launch service procurement, SpaceNews reports.

A front-loaded contract … “The launch was not that expensive,” Shotwell said during a panel discussion at the virtual World Satellite Business Week conference hosted by Euroconsult. SpaceX, which unlike its competitors did not receive development funding, is charging the government for the cost of an extended payload fairing, upgrades to the company’s West Coast launch pad at Vandenberg Air Force in California, and a vertical integration facility required for NRO missions. The price “reflects mostly the infrastructure,” Shotwell said. (submitted by platykurtic and Ken the Bin)

NASA confirms delay of SLS Green Run tests. The space agency said last Friday that it and Boeing are continuing to work toward completing the final two of eight test as part of its Green Run activities at Stennis Space Center. This would culminate in a hot-fire test of the core stage. However, NASA acknowledged, those final tests will be delayed into late December, at the earliest. Engineers are working on a problem related to a prevalve that supplies liquid hydrogen to the rocket’s RS-25 engines.

Taking time for repairs … NASA said the prevalve’s performance was “inconsistent” during recent tests. Engineers have inspected the valve, understand the reason it is not working properly, and plan to repair the valve while the core stage remains in the B-2 test stand. Following a successful repair, the team plans to conduct the Green Run wet dress rehearsal and hot-fire testing before the end of the year. For what it’s worth, two sources characterized such a schedule as “optimistic” to Ars. (submitted by Ken the Bin)

SpaceX makes progress toward 15km flight. After stacking a nose cone on top of its SN8 Starship prototype in late October, SpaceX engineers in Boca Chica, Texas, successfully proof-tested the liquid-oxygen header tank at the top of the vehicle. Then, on Tuesday, the company completed a static-fire test of the header tank with a single engine.

It’s probably going to be on Thanksgiving, you know … In all likelihood, the company will conduct two or three additional static-fire tests to ensure the performance of the entire Starship prototype before attempting a launch with three Raptor engines. This 15km flight, which will provide a very difficult test for the vehicle in terms of trying to land from that altitude, will probably not take place before the final 10 days of November.