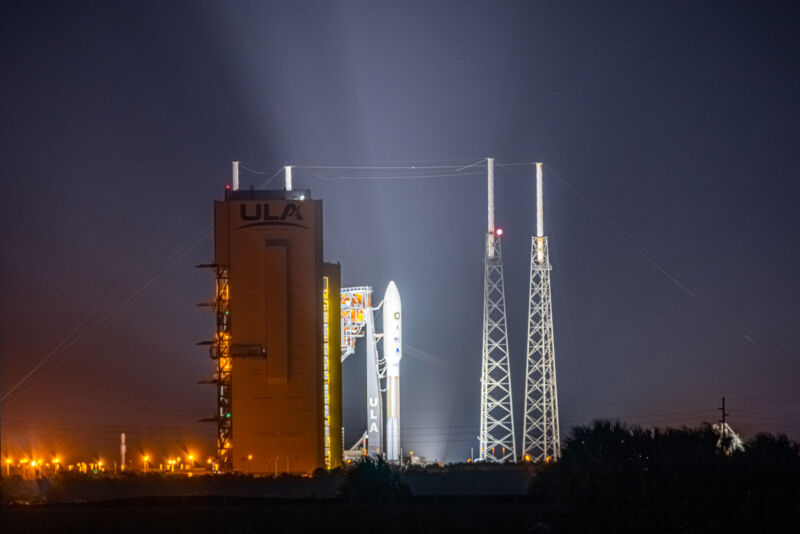 Enlarge / Atlas V on SLC-41 after being scrubbed due to an unexpected system response from remotely commanded ground system liquid oxygen valves.
Trevor Mahlmann for Ars

Welcome to Edition 3.23 of the Rocket Report! Times are good when SpaceX launches a rocket on Thursday evening and United Launch Alliance has the potential to breaks its streak of scrubs on Sunday. After that, the next big US launch will be the Crew-1 mission carrying four humans into space—the most people launching at one time in more than a decade.

As always, we welcome reader submissions, and if you don’t want to miss an issue, please subscribe using the box below (the form will not appear on AMP-enabled versions of the site). Each report will include information on small-, medium-, and heavy-lift rockets as well as a quick look ahead at the next three launches on the calendar.

Rocket Lab to attempt a first-stage recovery. Rocket Lab said Thursday it will attempt to recover the first stage of its Electron rocket for the first time with its next mission, scheduled for liftoff in mid-November. Company founder Peter Beck said he was not sure what Rocket Lab would fish out of the ocean. It could be a nearly intact first stage or, he admitted, “a smoldering stump.” The key with this test, he said, was to gather data about the parachute system, Ars reports.

Catching a falling rocket … With the current recovery plan, as the Electron rocket descends lower into the atmosphere, a drogue parachute will deploy, followed by a main parachute. If all goes well, the rocket should splash into the ocean while traveling less than 10 meters per second. After this (and likely other splashdown tests) demonstrates the company is able to bring the first stage back whole, the final step will be catching the vehicle midair using a helicopter. This will avoid water damage to the vehicle from the ocean.

A helping hand … The contracts are worth 500,000 euros each, and they’re aimed at helping the companies move from development to operations. Awards to other companies may be announced in the future. “We look forward to supporting these companies in achieving their ambitious objectives, fostering diversification and competitiveness of the European space transportation sector,” said Jorgen Bru, ESA’s Commercial Services Manager. (submitted by platykurtic)

The Rocket Report: An Ars newsletter

The easiest way to keep up with Eric Berger’s space reporting is to sign up for his newsletter, we’ll collect his stories in your inbox.
Sign Me Up!

Virgin Orbit invests in a launch customer. SpaceNews reports that Virgin Orbit plans to invest in the financially troubled satellite-constellation company Sky and Space Global (SAS), as well as partner with it on launch and satellite services. SAS said that Virgin Orbit will take a stake of no less than 14.7 percent in the company by purchasing shares at a price of $0.14 each.

Canceled launch deal … The investment appears to be valued at about $2 million, and in exchange for the investment, the companies will cancel a previous launch agreement valued at $55 million Australian. SAS will also sign a three-year “launch services and consulting agreement” with Virgin Orbit for $1 million per year, and the two companies will agree to promote each other’s services. Unless SAS makes a big recovery, this would appear to be a substantial loss of launch contracts for Virgin Orbit. (submitted by Ken the Bin)

Vector is restarting operations, apparently. Vector, the small-launch-vehicle developer that went bankrupt in 2019, is getting a second chance under new ownership, with changes to both its technology and initial markets, SpaceNews reports. Vector has raised more than $100 million to develop a family of small launch vehicles, but the company suspended operations in August 2019 and laid off most of its employees after one of its key investors pulled out.

Will switch to a more conventional fuel, RP-1 … The new owner of Vector’s launch assets is a consortium led by John Moran, and the company’s new chief executive is Robert Spalding, a retired Air Force brigadier general who previously served on the staff of the National Security Council. “We thought there was tremendous value. They had invested $100 million in trying and failing,” Spalding said, citing the facilities and infrastructure it developed. “There was a lot of things that they had done right, and there [are] just a few things that they had done wrong.” We’ll see. (submitted by Ken the Bin and platykurtic)

SpaceX flies an unproven rocket. Before Thursday night, SpaceX had not launched a brand-new rocket since June, when it boosted a GPS III satellite for the US Space Force on a Falcon 9 rocket. Since that time the company has launched several commercial missions and its own Starlink satellites on a variety of previously flown rockets, and they were all successful. However, when the company tried to launch a new Falcon 9 first stage on October 2—this was for yet another GPS satellite, named GPS III-04—the attempt was scrubbed at T-2 seconds.

Three flights on new first stages … By the end of October, the company said it had addressed the problem, which is a good thing because SpaceX had three important missions coming up for the US government, all slated to fly on new rockets. First up was a second attempt to launch the GPS III-04 satellite, and this was successful. After this, SpaceX will seek to fly its second crewed mission and the Sentinel-6 satellite for NASA later this month, Ars reports.

Europe’s “best answer” to Falcon 9 runs into trouble. European space officials announced late last week that the debut of the Ariane 6 rocket will be delayed again—this time until the second quarter of 2022. This large rocket, which has a roughly comparable lift capacity to SpaceX’s Falcon 9 booster, was originally due to launch before the end of 2020. “We can say today that COVID-19 has led to an extension of activities on the critical path,” said Daniel Neuenschwander, the director of space transportation at the European Space Agency, Ars reports.

Losing valuable time … In response to competition from SpaceX’s Falcon 9 rocket, the Ariane 6 was designed to be more cost-effective to fly. Originally, the European Space Agency planned to debut the Ariane 6 rocket by now. Although the rocket might cost more than a Falcon 9, it had the capability to deliver two large satellites to geostationary orbit and would come with several decades of launch reliability behind it. A few years ago, this seemed like a plausible argument. But since then SpaceX has made considerably steps toward increasing the reliability of the Falcon 9. Now, Ariane 6 may also be forced to compete with Super Heavy.

Another scrub for ULA with an Atlas V rocket. A ground-systems issue got United Launch Alliance again on Wednesday evening. Prior to the opening of the Atlas V launch window on Wednesday evening, an issue related to ground-system liquid-oxygen valves could not be solved in time for a launch attempt from Florida. The NROL-101 mission will now liftoff no earlier than Sunday.

United Launch Alliance could do with a successful liftoff … This was the second ground-systems-related delay for this Atlas V launch, Ars reports. And the last couple of months have been difficult for the company at it has struggled to launch another mission for the National Reconnaissance Office, an important customer that pays a premium to get its high-dollar satellites into space. This NROL-44 mission, due to launch on a Delta IV Heavy rocket on a nearby pad, has scrubbed a half-dozen times since late August. A new date has yet to be publicly set.

SLS working through technical issues with Green Run. While a late-season hurricane may have delayed operations for a few days at NASA’s engine test facility in Mississippi, Boeing and the space agency are also having technical issues with the SLS rocket’s core stage. In a report, NASASpaceflight.com highlights two problems that are likely to delay the Green Run hot-fire test into December or early 2021.

Technical thickets … One issue involves one of the four liquid hydrogen prevalves that isolate the tank from the inlets of each of the four RS-25 Core Stage engines before engine start. The prevalves open just before engine ignition and then feed propellants to the engines while they are firing. Another issue was reported with the performance of the thrust vector control system during test case five. NASA has yet to update a target date for the Green Run test. (submitted by Ken the Bin)

China moves on from Long March 9. For the last several years, it was thought that China would pursue development of a Saturn V-class rocket to launch future crewed missions to the Moon and into deep space. But this no longer appears to be the case, SpaceNews reports in an overview of the country’s lunar architecture that excludes the previously disclosed Long March 9 vehicle.

Three cores and nevermore … Instead, a concept using three, 5-meter diameter first-stage cores and clusters of YF-100K engines—uprated versions of the YF-100 kerosene engines used by China’s new Long March 5, 6, and 7 launchers—now appears to be integral to China’s plans. This rocket might look something like a Falcon 9 or Delta IV Heavy. We welcome China’s sharing of its launch-architecture plans. (submitted by platykurtic and Ken the Bin)