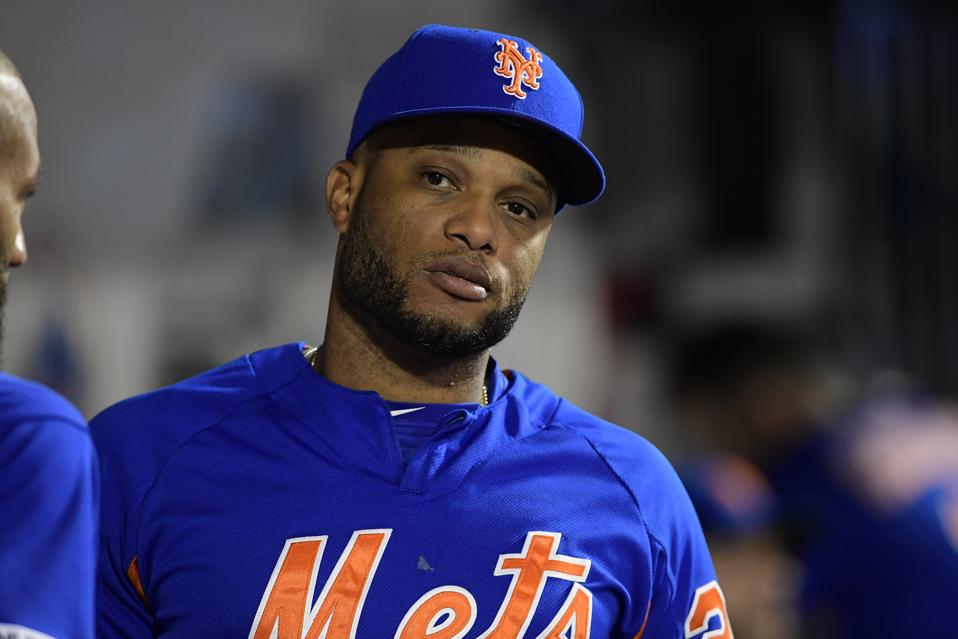 Anyone with a cursory knowledge of Mets history and how baseball works in the early stages of the 21st century had a pretty good — or pretty bad — feeling the first trade executed by the GM duo of Brodie Van Wagenen/Jeff Wilpon was going to be the trade that kept on giving in the way a middle of the night pizza binge keeps on giving.

And on Wednesday afternoon, the decision to trade prospects Justin Dunn and Jarred Kelenic to the Mariners in the blockbuster that brought Robinson Cano and Edwin Diaz to the Mets kept on giving, albeit in a way that would have been unimaginable a year ago.

Cano’s joint pursuits of 3,000 hits and the Hall of Fame each ended with the mid-afternoon announcement by Major League Baseball that it has suspended him for the 2021 season following a second positive test for a PED — reportedly stanozolol, considered one of the most potent as well as easiest-to-detect PEDs.

The outlook for the rest of Cano’s career is only slightly less cloudy. He’ll have two years and $48 million left on his contract after next season, but if he takes the field again in 2022, he’ll be a 39-year-old two-time PED offender roughly 18 months removed from his last big league action and five years removed from the last season in which he played as many as 110 games.

Being stuck with such an albatross of a contract is a worst-case nightmare scenario for a team that operates as if it’s a small-market franchise. Given the unlikelihood of eating a bunch of his salary to facilitate a trade, the only solution would be to try and wring some value out of Cano by wedging him into semi-regular playing time despite his advancing age, his history of cheating and the presence of better and younger players ahead of him.

Except…the Mets no longer act like a small-market franchise, and Cano’s suspension provided them a most unexpected early holiday gift.

Cano’s suspension results in the forfeiture of the $24 million he was scheduled to make next season. The Mets were responsible for $20 million of that, which means there’s $20 million in found money heading into a weird winter in which they are expected to be one of the few aggressive teams on a free agent market depressed by the coronavirus pandemic.

If the Wilpons still owned the Mets, even the $20 million in found money would have come with strings attached. Instead of being locked into the no. 2 or no. 3 spot in the rotation. Marcus Stroman would already be on the open market, either because the Mets didn’t extend him a qualifying offer worth almost $18 million or because they did so after Stroman’s agents made it clear he wouldn’t accept it, thereby ensuring the Mets a compensatory draft pick when he signed elsewhere.

The $20 million saved via Cano’s foolishness would have been spread around to multiple players and multiple needs — perhaps a $10 million starting pitcher not nearly as good as Stroman here, a $5 million catcher unlikely to make an All-Star team there and another $5 million saved for a rainy day, or just saved. And with Cano no longer taking up at-bats at second base and, possibly, designated hitter, the Mets would spin his suspension as a chance to utilize some of their position player depth.

Yet under Steve Cohen, the Mets can use that $20 million to target the best available player on the market with no need to fret he might topple their house of cards roster construction.

Just because the Mets spent $18 million on Stroman doesn’t mean they can’t spend $20 million trying to lure Trevor Bauer to serve as the game’s best no. 2 starter behind Jacob deGrom. Or they can use the $20 million to try and lure George Springer to play centerfield, because now that second base and designated hitter are open for for Jeff McNeil and some combination of Dominic Smith/Pete Alonso doesn’t mean the Mets have to go into next season with Brandon Nimmo in centerfield. Or they can use the $20 million to try and sign J.R. Realmuto instead of hoping to get by at catcher with some combination of Tomas Nido, Ali Sanchez and a free agent.

Or the Mets can try and do something that almost always eluded the Wilpons: Win the press conference, steal some thunder from the Yankees and also win baseball games by signing DJ LeMahieu, an all-around terrific baseball player whose main positions are first and second base. It might squeeze out someone from the productive and likable group of McNeil-Smith-Alonso-Nimmo-J.D. Davis, but these are the Steve Cohen Mets. No longer will the Mets have to get by with their pretty good depth because they can’t afford to upgrade to something better.

And if Cano tries coming back in 2022? The Mets are finally able to treat someone like a sunk cost, either by outright releasing him or using him sparingly off the bench. There’s no need to try and play him regularly to make short-term justifications for a long-ago guaranteed salary.

As bountiful as the Cano news is for the Mets, it won’t undo the damage done by the trade. A bad idea in real time — prospects have never been more valuable than right now, the Mets had a spotty record of acquiring aging veterans looking to polish off their Hall of Fame cases and closer might be the most fungible position in sports this side of running back — become astoundingly so in 2019.

Diaz, who racked up 57 saves in 2018, finished his first season in New York with a 5.59 ERA while blowing seven save chances and giving up a whopping 15 homers. Cano took three trips to the injured list — as many as he took in his first 14 big league seasons combined — and posted career-lows with a .256 batting average and a .736 OPS. Kelenic, meanwhile, became a consensus top 15 prospect by hitting .291 with 23 homers and 68 RBIs between Single-A and Double-A while Dunn ended the season in the Mariners’ rotation.

Kelenic didn’t take an at-bat this year due to the canceled minor league season, so 2020 was a slightly less torturous exercise in what could have been for the Mets. While Dunn (4-1 with a 4.34 ERA in 10 starts) continued to emerge as a potential rotation stalwart for the Mariners, Diaz struck out a whopping 17.5 batters per nine innings and recorded a 1.75 ERA, though he recorded just six saves as he struggled to earn the ninth-inning trust of new manager Luis Rojas. Cano, apparently with a very potent assist, batted .316 with an .896 OPS while becoming just the second second baseman ever to hit at least 10 homers in each of his first 16 seasons.

As productive as they were in 2020, there was nothing Cano and Diaz could have done next year or at any point thereafter to make the trade any less terrible, especially given Kelenic could haunt the Mets well into the 2030s. But Cano’s suspension still serves as a gift in the form of the reminders that the Mets can now actually operate like a big-market team — one run by qualified adults.

No longer are the Mets being operated at the whims of the owner’s son, who encouraged Van Wagenen to make a bad trade because it gave the Mets some wintertime attention.

“I did talk to Brodie (and say) ‘OK, let’s make this first move that you do — because your first is always your first — and knowing that this was his first deal, I liked that it was a bigger deal than just a run-of-the-mill deal that wouldn’t have all of you out here today,” Jeff Wilpon said at the press conference introducing Cano and Diaz on Dec. 4, 2018.

There’s no more learning on the job by a cronyistic neophyte with the unearned sense of self-satisfaction and entitlement first flashed by Van Wagenen at that press conference, when he declared Cano — whose 10-year, $240 million deal he negotiated — was motivated to prove he had plenty left and, oh yeah, that he hadn’t TECHNICALLY tested positive for a PED.

“I do think it’s important remembering Robby was not suspended for a PED — he was suspended for a diuretic,” Van Wagenen said, ending his availability with words that, almost exactly two years later, proved to be yet another gift that kept on giving in previously unimaginable positive ways for the Mets.