Defying expectations, investors piled into initial public offerings at a record rate in 2020, and few expect the euphoria to wear off soon.

When the pandemic began shutting down swaths of the U.S. economy in March and the stock market swooned, veteran IPO watchers braced for another disappointing year after activity in 2019 fell short of expectations.

Following a brief pause, new-issue activity resumed in late May after the Federal Reserve signaled it would take extraordinary measures to shore up the economy and the stock market rebounded from a steep decline. Several stocks that debuted around then soared, setting the stage for a race to the public markets that after a brief holiday pause is expected to pick up again in the new year.

Companies raised $167.2 billion through 454 offerings on U.S. exchanges this year through Dec. 24, compared with the previous full-year record of $107.9 billion at the height of the dot-com boom in 1999, according to Dealogic. The coronavirus pandemic turned the typical rhythm of the IPO market on its head, with $67.3 billion raised in the fourth quarter. That is roughly six times the total for the first three months of the year.

As a result of the scramble, stalwarts of the 21st-century economy including
Airbnb Inc.,
DoorDash Inc.
and
Palantir Technologies Inc.
are now publicly traded, accessible to the average investor.

The IPO market got a boost from a surprising surge in special-purpose acquisition companies, or SPACs, empty vehicles that raise money through listings and then look for businesses to merge with. They represent a bet that a yet-unknown business will generate steep returns and typify the risk appetite that is fueling new issues and markets more broadly.

Nearly half of all fundraising in the IPO market was for SPACs, and the total raised through SPACs this year is almost six times as much as the vehicles raised in 2019, the previous record-setting year.

The IPO frenzy reached its height in the second week of December, typically a quiet time for new offerings as year-end approaches, when Airbnb and DoorDash both more than doubled in their first day of trading. That gave the two companies, which have yet to produce consistent profits, valuations stretching well into the tens of billions of dollars.

Those gains raised eyebrows among some who worry the IPO market is overheating, and draw parallels with the period before the internet bubble burst in early 2000. They point to a surge in interest among individual investors, many of whom use a popular brokerage app run by Robinhood Financial LLC. If history is any guide, they say, such investors are liable to run for the exits as soon as markets reverse course.

What does 2021 hold in store for IPOs? Join the conversation below.

Colin Stewart,
Morgan Stanley’s
global head of technology equity capital markets, said investors have “limitless interest” in certain stocks, particularly those that have captured the imagination of retail investors. “The moves and valuations of certain stocks are not necessarily based on business fundamentals,” he said.

Such concerns were evident when two companies that had planned to debut in the wake of Airbnb and DoorDash—Roblox Corp. and point-of-sale lender Affirm Holdings Inc.—decided to delay their listings. Roblox officials in particular were concerned about leaving money on the table should the videogame platform also have a big first-day pop, according to people familiar with the matter.

Not all new entrants are receiving a warm welcome from public investors. The week after Airbnb and DoorDash made their debuts, for example, the parent of e-commerce site Wish closed below its IPO price on its first day of trading.

Few bankers predict the current pace will abate soon. A slew of billion-dollar-plus startups, like Robinhood itself, bitcoin exchange Coinbase Global Inc. and grocery-delivery service Instacart Inc., are waiting in the wings. Many more international companies, like South Korean e-commerce company Coupang Corp., are considering listing on U.S. exchanges too. 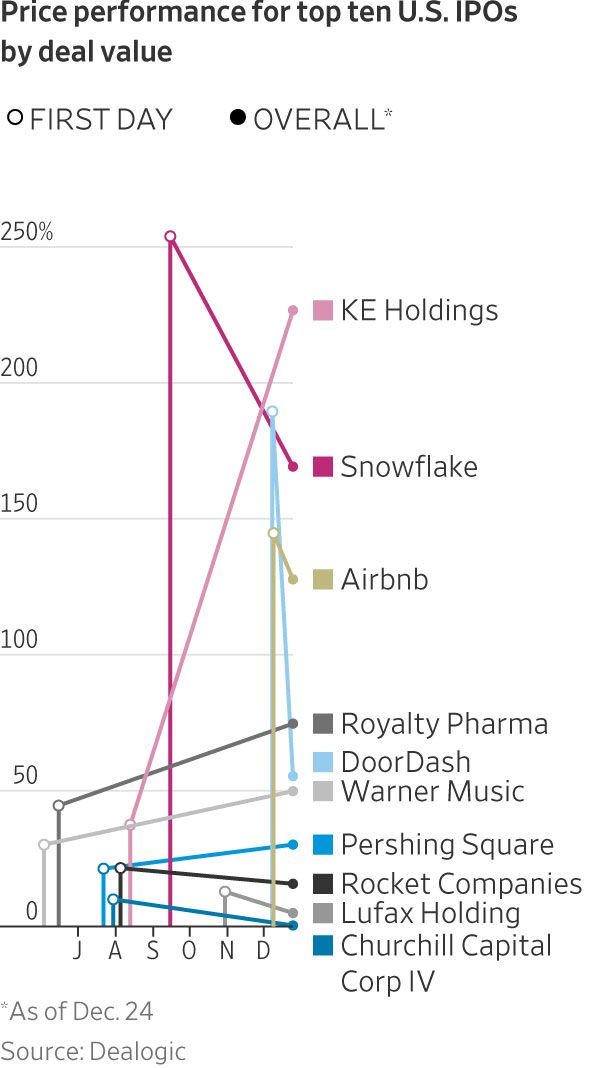 And the SPAC frenzy will likely continue. Noted technology investor
SoftBank Group Corp.
filed paperwork for a potential SPAC in late December. The Japanese conglomerate is considering plans to bring at least two more to market in 2021, according to people familiar with its plans.

The flurry of activity kicked off in late May, when the largest offering since the onset of the pandemic, the IPO of insurance-policy-comparison site
SelectQuote Inc.
raised $570 million after pricing above an initial range. The shares rose 35% on their first day of trading.

Several companies followed, handing investors more big wins.
Vroom Inc.,
an online used-car seller that debuted in early June, and
Lemonade Inc.,
an insurance startup that followed about a month later, more than doubled in their first day of trading. The performance encouraged more companies to push ahead with plans for new issues.

The extreme interest in some IPOs, while others languish, has made it especially tricky for underwriters to find the right price for stocks to debut at.

Take
Snowflake Inc.
It went public in September at a price of $120, or roughly triple what the data-warehousing company targeted when it started marketing the shares to investors. The stock still more than doubled on its first day of trading and was recently up more than 150% from its IPO price.

In a sign companies continue to experiment with new ways to access public markets, Palantir and smaller tech startup
Asana Inc.
made their debuts without raising money. The so-called direct listings, which have only been used by four major companies, are expected to gain in popularity in 2021 after the Securities and Exchange Commission said in December it will allow issuers to raise capital when they use them to go public.

Whatever the method, startups’ interest in going public shows no signs of abating.

John Chirico,
co-head of North American banking, capital markets and advisory at
Citigroup Inc.,
said companies “see the benefit and value of being public like they never have before.”

Airbnb was bleeding cash earlier this year, making its plans to go public by the end of 2020 look bleak. But by adapting its business to the pandemic, Airbnb looks to have salvaged its IPO and possibly its future. Photo illustration: Jacob Reynolds/WSJ[object Object]

Write to Maureen Farrell at maureen.farrell@wsj.com