Big U.S. companies have trounced expectations this earnings season, potentially laying the foundation for the next leg of the stock market’s rally as investors look beyond the election.

With most of the companies in the S&P 500 reporting, analysts are projecting third-quarter profits fell 7.5% from a year earlier, according to FactSet. That is a sharp improvement from the 21% decline they forecast at the end of September.

The brightening earnings picture shows the speed at which many companies are recovering from the coronavirus-induced downturn, even as the pandemic continues to weigh on the broader economy.
United Parcel Service Inc.,
Citigroup Inc.
and Taco Bell parent
Yum! Brands Inc.
are among those that have reported results that handily beat projections. 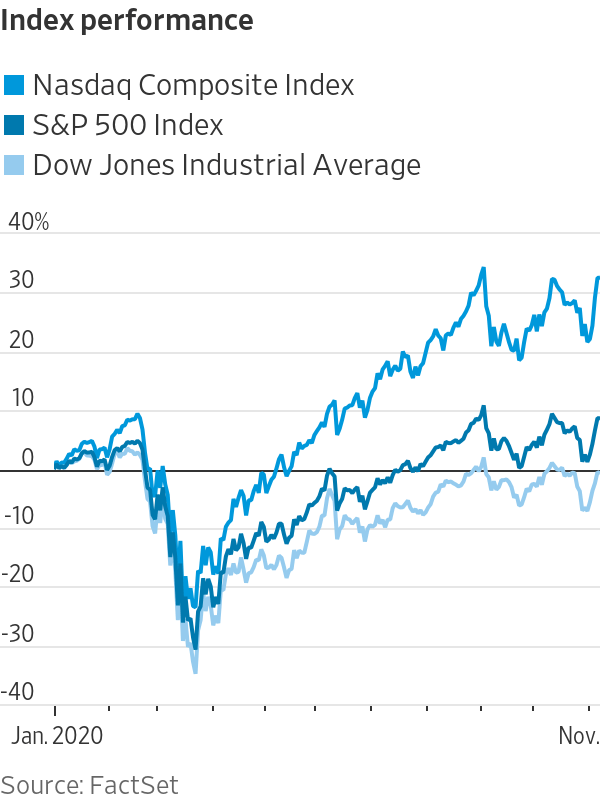 The much-stronger-than-expected results, according to bullish investors, are evidence of a V-shaped recovery in the economy and could propel stocks out of a narrow trading range to new highs. The S&P 500 is up 8.6% this year and 2% below the record set in early September.

Last month investors largely appeared to shrug off the improving earnings: As corporate results rolled in throughout October—a month punctuated by campaign developments and worrying coronavirus news—the S&P 500 fell 2.8%. Shares of companies that reported stronger-than-expected profits for the third quarter have inched up only 0.4% on average from two days before their reports to two days after, compared with the five-year average of 0.9%, according to FactSet.

Then, as election results suggested that Congress might be divided—and less likely to approve major policy changes—the market shook off its lethargy. The broad U.S. stock index surged 7.3% last week in its best weekly performance since April.

The easing political concerns could make room for renewed focus on fundamentals and how companies are navigating a business environment reshaped by a still-spreading virus. Although investors anticipated an earnings rebound, the extent to which profits surpassed estimates could inject new confidence.

Corporate earnings are the biggest driver of stocks over the long term, though in recent years, stock prices have climbed faster than profits. In the week ahead, investors will look to reports from
McDonald’s Corp.
,
Walt Disney Co.
and networking-equipment company
Cisco Systems Inc.
for clues about the recovery.

Analysts expect earnings will decline 11% year over year in the fourth quarter before beginning to climb again in the first quarter of 2021.

In recent weeks, PineBridge Investments has trimmed positions in big tech companies and bought shares in other sectors, including financials and industrials, on expectations that a wider array of stocks will begin to contribute to the market’s performance, according to Mr. Sen.

The S&P 500’s rally this year has been driven by advances in megacap tech stocks, such as
Apple Inc.,
which is up 62% for the year, and
Amazon.com Inc.,
which has rallied 79%. Meanwhile, more than half of the companies in the index are in negative territory for the year. 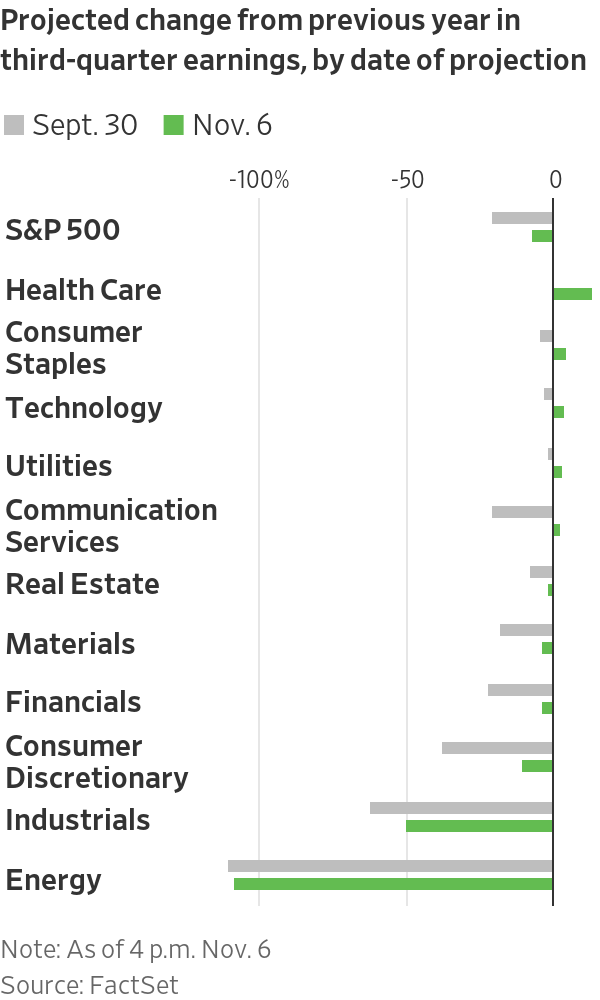 The earnings picture brightened in part because of results from those companies and their peers
Facebook Inc.,
Microsoft Corp.
and Google’s parent,
Alphabet Inc.
But the earnings beats are widespread, with 86% of reporting S&P 500 companies having exceeded estimates. Analysts have lifted third-quarter expectations for all 11 S&P 500 sectors.

Among the groups to see major shifts, the communications services group, which includes Facebook and Alphabet, is projected to record a 2.3% increase in profits from a year earlier, compared with expectations at the end of September for a drop of 21%. Buoyed by stay-at-home trends, both companies reported strong earnings last month.

The consumer staples group is expected to see an earnings increase of 4%, a reversal from an anticipated decline of 4.9%. Retailers have benefited as shoppers boosted their spending over the summer. On a
Costco Wholesale Corp.
earnings call in September, Chief Financial Officer Richard Galanti said the strength in sales of big-ticket items had been a little surprising.

“In some instances, we had tried to cut back a few orders back in March and April for seasonal summer goods like patio furniture,” he said. “Very quickly, we were having to scramble for more of those.”

On the other hand, estimates have improved only slightly for the hard-hit energy sector, which has been beset by low oil prices and a dramatic slump in demand. The sector is projected to record a quarterly loss, just slightly smaller than the one estimated a few weeks ago.

Can corporate earnings continue to beat expectations for the rest of the year? Why or why not? Join the conversation below.

The rebound in corporate profits coincides with a record pace of growth in the economy in the third quarter. Data suggest that the U.S. has recovered about two-thirds of the ground it lost earlier in the coronavirus pandemic and that the improvement has continued in the fourth quarter, though at a slower pace.

“The earnings to some extent have been confirmation of some of the trends that were already in place in this recovery, as things sort of bottomed out and then the economy started to reopen and sentiment started to pick up,” said Holly MacDonald, chief investment officer at Bessemer Trust.

Despite those reasons for optimism, analysts caution that it might be difficult for stocks to continue powering higher. That is because the market is looking increasingly pricey. The S&P 500 traded Thursday at 21.80 times its projected earnings over the next 12 months, above a five-year average of 17.56, according to FactSet. Valuations are higher among the tech darlings: Apple, for example, was trading at 29.90 times expected earnings, above a five-year average of 16.05.

The price tags are giving pause to some investors who say companies that don’t keep up their rapid growth could find their shares in a precarious position.

“The earnings results right now are really, really good,” said George Cipolloni III, portfolio manager at Penn Mutual Asset Management. “If you look at…valuations, it sets that kind of high bar where earnings have to continue to be good.”

Write to Karen Langley at karen.langley@wsj.com