The problem for BBVA was that while it grew in the U.S. over a 15-year period, particularly in the southwest, it didn’t get big enough that it made sense to stay in the country. The second-largest Spanish lender lacked the capital to further expand its footprint and couldn’t ask shareholders—already struggling with its depressed share price—to stump up. 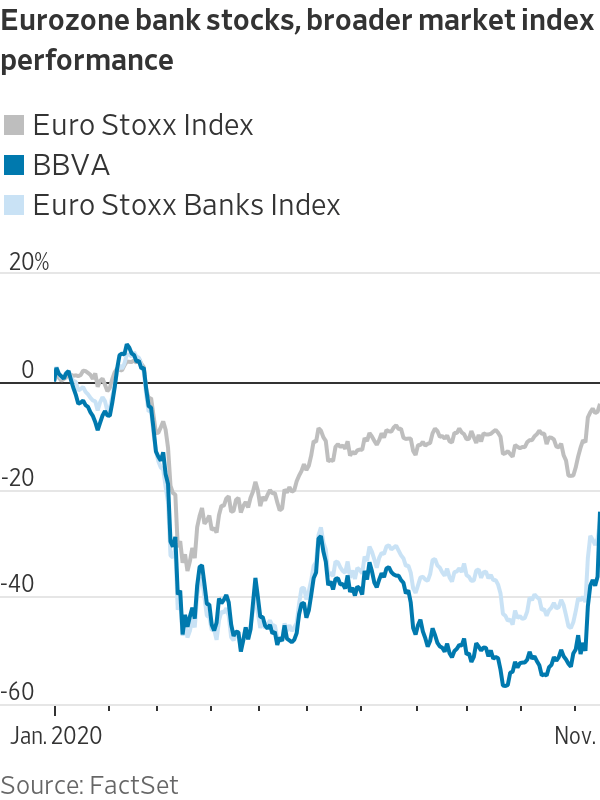 BBVA’s retreat from the U.S. also shows how the coronavirus pandemic is making European banks more calculated about their prospects for growth and survival, and comes amid an expected wave of mergers and acquisitions involving lenders in Europe.

With the cash proceeds from the PNC deal—worth 50% of BBVA’s entire market value—the bank will be able to weather the pandemic more comfortably. It also has the option to grow in its other key markets, including Spain and Mexico, and to buy back shares to boost its share price and satisfy shareholders. Shares in smaller Spanish bank,
Banco de Sabadell SA,
soared 20% on investor hopes that BBVA might buy it to enlarge its domestic business.

“BBVA lacked scale in the U.S. to enhance returns in a sustained manner and hence make the local unit become a more transformational part of the group,”
UBS
analysts said in a note. They were among analysts flagging Sabadell as a possible acquisition target, with its shares down more than 60% this year.

BBVA was one of the European banks that spread out across the world before the last financial crisis on a hunt for growth. It bought a small California bank in 2004 and expanded across Texas, Arizona and other Sun Belt states through a string of acquisitions. It and larger Spanish rival
Banco Santander SA
both kept sizable retail banks in both North and South America, even after other foreign banks exited in recent years.

But while BBVA was the number four bank in Texas by deposits, its market share, at 4.5%, was considered too small for strong returns.

Pittsburgh-based PNC said it agreed to buy BBVA’s U.S. operations for $11.6 billion. “This is a great transaction, one that is testament to our focus on generating value to our shareholders” said Carlos Torres Vila, BBVA executive chairman, adding the excess capital “provides lots of strategic flexibility.”

Shares of BBVA were up close to 20% in midday trading in Europe, but are still down almost a quarter this year. European banks were already struggling to make money under a low-interest rate environment and have been hard hit by the pandemic. Spain’s economy in particular has suffered as the spread of the virus has triggered months of lockdowns. A ban on dividend payments by banking regulators further hit the stock.

Some European bank executives say their aim is to come out of the current crisis with more viable operations than they started with, by making long-postponed decisions and scissoring businesses that can’t compete in the long term.

Mr. Torres Vila declined to discuss potential targets, but said in months ahead, and as economies recover from the pandemic hit, “We believe that there might be opportunities to reinforce the franchises where we have leadership positions.”

Another duo of Spanish lenders,
CaixaBank SA
and
Bankia SA,
agreed to merge in September.

Bank executives and industry consultants say there are still benefits to being in different countries, such as diversifying earnings in different economies. The offsets can be multiple layers of regulation, local capital that can become trapped, and the difficulty of attaining adequate scale in multiple markets.

BBVA continues to bet in markets where it sees itself as big enough to succeed, including at home in Spain, and in Mexico and Turkey. Its market share in lending in those countries is 13%, 23% and 18%, respectively.

Other geographic retreats so far this year have included
HSBC Holdings
PLC’s shuttering of around one-third of its U.S. branches, and ABN Amro Bank NV curtailing its lending to corporate customers outside of Europe. Sabadell, BBVA’s potential acquisition target, has been considering ways to exit from the U.K. after buying a midsize bank there five years ago that has struggled for scale.