The 2021 Grammy Awards show has been postponed to March 14 due to concerns over the coronavirus, which is worsening and leaving hospitals overwhelmed in Los Angeles. At the same time, both music fans and artists alike remain eager to learn the winners of this year’s 63rd competition.

One of the 83 award categories, Gospel/Contemporary Christian Music, features Grammy Award-winning R&B musician, songwriter and record producer PJ Morton, who is also a member of the pop rock band Maroon 5. Morton is nominated this year for Best Gospel Album for his self-produced, chart-topping and first-ever gospel project, Gospel According to PJ.

“I am a born preacher’s kid, I’ve been a pastor’s kid my whole life, and (originally) decided not to make gospel music as an artist,” says Morton, whose new digital-only record debuted in first place among Billboard’s Top Gospel Albums. “It was kind of a full-circle moment to work on this gospel album.”

Premiering today, a documentary complementing the new Gospel According to PJ album details how Morton created the compilation mostly in quarantine during the pandemic. He also made the film to document his journey as an established R&B and pop songwriter also taking on the world of gospel music.

The documentary also features scenes of Morton performing as a youth and interviews with album participating musicians including Kirk Franklin, Smokie Norful and Tasha Cobbs Leonard. The artist says that, while he did not follow his father’s path of becoming a preacher, his faith-based upbringing and the support that his father gave him for pursuing music eventually inspired him to accomplish more in the space.

“I think that ultimately that the takeaway is that you can be all these different things, and remain who you are. You can walk in different spaces and still be yourself,” Morton adds. 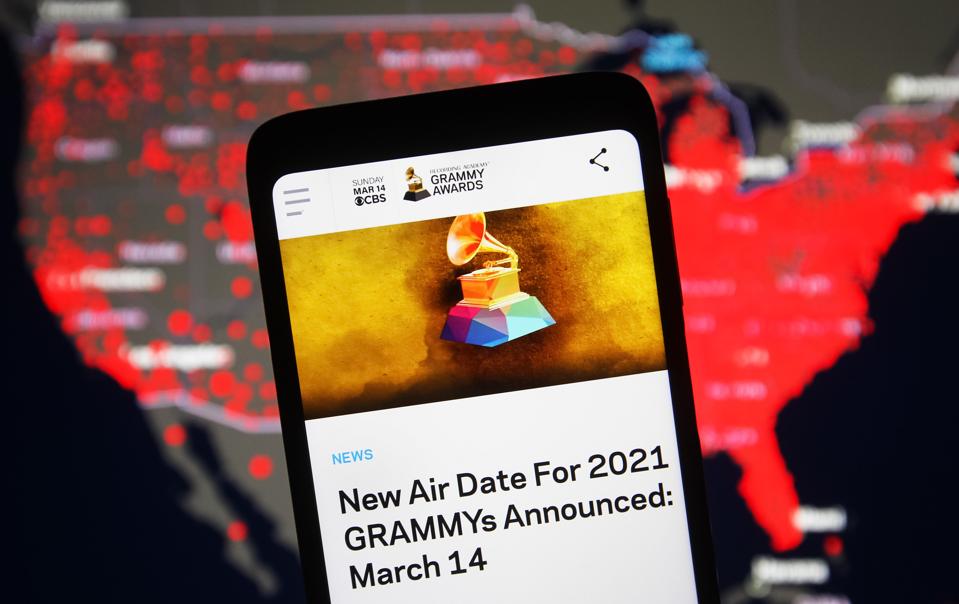 UKRAINE – 2021/01/06: In this photo illustration a fragment of Grammy website is seen on a … [+] smartphone screen in front of the COVID-19 coronavirus cases map in the U.S. The 63rd Annual GRAMMY Awards in the music industry was postponed to March 14 due to concerns over the spread of the Covid-19 coronavirus, reportedly by media on 5 January 2021. (Photo Illustration by Pavlo Gonchar/SOPA Images/LightRocket via Getty Images)

With three consecutive Grammy nominations for Best R&B Album, Morton also earned back-to-back Grammy wins in 2019 and 2020. This year’s nomination also marks the performer’s 14th career Grammy nomination (ten solo and four with Maroon 5) and fourth year of honors in a row. Gospel According to PJ is Morton’s sixth self-released, self-produced album since his Gumbo breakout in 2017.

In support of racial equality, last year Morton teamed up with American rapper Tobe Nwigwe to release the song “Ashamed,” which recounts truths of inherent racism in America. He also recorded a music video, Buy Back the Block, emphasizing the power of the Black dollar and donating to New Orleans residents in need.

Morton is also making a name for himself as a versatile performer. During the pandemic this past year he launched his own weekly live-streamed trivia show, The Culture. Season one, which highlights Black art and entertainment with a wide variety of contestants from music journalist Questlove to American actor and rapper Omari Hardwick, is complete and a second season is in the works.

Last year was also a busy time for Morton on television. He brought gospel to late night comedy on The Late Show with Stephen Colbert and also appeared on The Tonight Show Starring Jimmy Fallon. In addition, he’s also starred on the Today show, The Daily Show, The Kelly Clarkson Show, PBC NewsHour, MSNBC, CNN, NPR’s Tiny Desk and more. Anative of New Orleans, Morton also represented the city during a live Dick Clark’s New Year’s Rockin’ Eve performance last month, performing “Auld Lang Syne” on the piano as part of the pre-countdown show to the fleur-de-lis drop at midnight.

With a new studio in New Orleans, Morton says that he is excited to collaborate more with other artists in the new year. He will also continue working on his solo career while he writes and produces hit songs for other stars’ albums. With gospel music at the heart of Morton’s work, he resists placing limits on where future projects will take him.

“We want to thank all of the talented artists, the staff, our vendors and especially this year’s nominees for their understanding, patience and willingness to work with us as we navigate these unprecedented times,” reads a statement by the Recording Academy chair, interim president and CEO Harvey Mason JR., CBS VIAC executive vice president of specials, music, live events and alternative programming Jack Sussman and Grammy Awards executive producer Ben Winston.