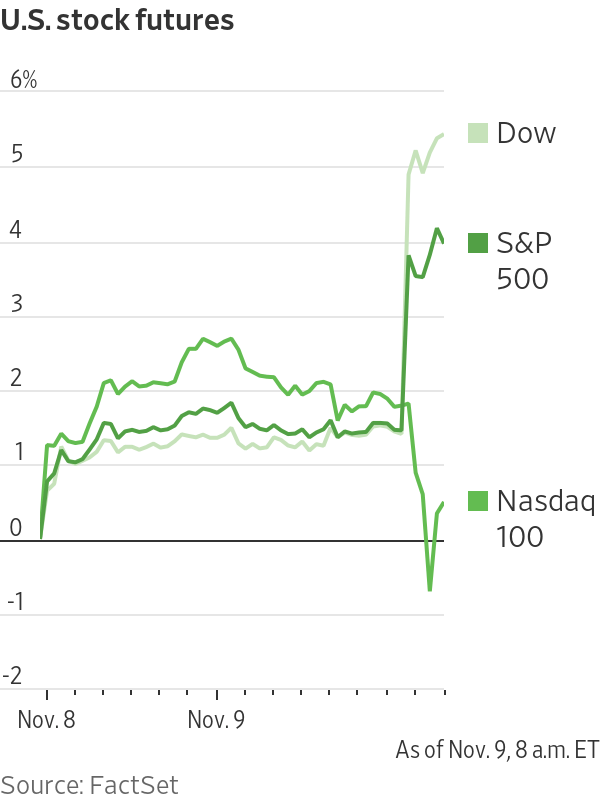 Here’s what we are watching as markets kick into gear Monday.

—Stock futures surged, with the Dow poised to open almost 1,800 points higher. That would take the blue-chips gauge just short of the 30,000-point milestone. Progress toward a crucial Covid-19 vaccine gave markets fresh impetus at the start of the week. Read our full market wrap here.

—What’s coming up. Cleveland Fed President Loretta Mester will speak at a virtual Philadelphia Fed fintech conference at 1:30 p.m. ET. China’s consumer- and producer-price indexes for October are due out at 8:30 p.m.

Pfizer
surged over 12% and
BioNTech
‘s ADRs rose 24% in offhours trading. The drugmakers’ Covid-19 vaccine candidate proved better than expected at protecting people from Covid-19 in a pivotal study.Airlines and travel stocks surged higher on the vaccine news, which marks a milestone in the hunt for shots that can stop the global pandemic.
United Airlines Holdings,
Delta Air Lines
and
Southwest Airlines
all jumped over 15%.
Royal Caribbean Group
and
Lyft
were also among the biggest winners in early trading.

Biogen
plunged 28% ahead of the market open. The company’s hopes to win regulatory approval for its experimental Alzheimer’s disease drug took a major hit Friday. An independent committee of outside experts assembled by the FDA voted that even the best available clinical data doesn’t show the drug to be effective.

F5 Networks
climbed 11% ahead of the opening bell. Activist investor Elliott Management took a stake in the software company, The Wall Street Journal reported Sunday. The company also said early Monday that it would buy back $1 billion of shares through fiscal 2022.

In contrast, finance and real estate stocks made large gains ahead of the opening bell.
American Express,
Wells Fargo,
Bank of America
and
JPMorgan Chase
advanced around 10% or more. In real estate,
Simon Property Group
and
Taubman Centers
jumped higher on the prospect of a rebound in shopping malls’ fortunes.

Must Reads Since You Went To Bed