Fresh off reelection as speaker of the House by a dwindled Democratic caucus on Wednesday, Nancy Pelosi seemed to suggest she plans to abide by an agreement she made in 2018 to only serve four years as House Democratic leader. 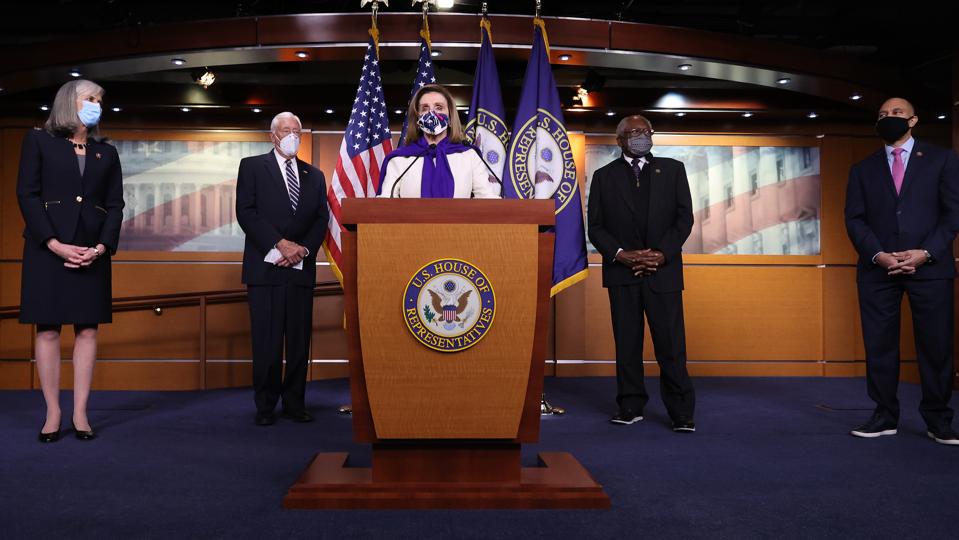 WASHINGTON, DC – NOVEMBER 18: Speaker of the House Nancy Pelosi (D-CA) (C) talks to reporters after … [+] she was re-elected to lead her conference along with (L-R) Assistant Speaker Katherine Clark (D-MA), Majority Leader Steny Hoyer (D-MD), Majority Whip James Clyburn (D-SC) and Caucus Chairman Hakeem Jeffries (D-NY) at the U.S. Capitol November 18, 2020 in Washington, DC. The conference leadership elections were conducted with some members in-person at a Washington hotel and others joining by Zoom due to the risk posed by the coronavirus pandemic. (Photo by Chip Somodevilla/Getty Images)

In order to quell a rebellion within her caucus and regain the speakership in 2018, Pelosi agreed to not seek the speakership again after four years while also announcing support for a three-term limit for Democratic leadership that never materialized.

After nabbing another term on Wednesday despite party infighting, the 80-year-old Pelosi noted that the term limits never happened but stated, “what I said then is whether it passes or not I will abide by those limits that are there.”

Pelosi pushed back on the notion she was making a “Shermanesque statement” – a clear indication of her electoral intentions – but said, “I can’t wait to be working with Joe Biden and preparing us for our transition into the future.”

“I don’t want to undermine any leverage I may have, but I made the statement,” Pelosi reiterated, telling reporters, “don’t let me have to be more specific than that because we never expected to have another term now. I consider this a gift.”

Pelosi and her colleagues bristled at the question: “The speaker was elected with unbridled enthusiasm,” House Democratic Caucus Chair Hakeem Jeffries said, with Pelosi adding, “without any of those people who voted for me saying ‘is this your last term?’”

Asked about her plans to unify House Democrats amid divisions between the moderate and progressive branches of the party over policy and messaging, Pelosi said “one thing we all agree on is elections are about the future… our caucus is unified in that respect: looking to the future for America’s working families.” Pelosi also noted that the election of a Democratic president “has a unifying impact as well, especially when he’s a unifier like Joe Biden.”

Several reporters noted the vagueness of Pelosi’s answer, which many felt allowed her to claim another term atop Democratic leadership. “Pelosi was intentionally vague here,” tweeted Politico reporter Heather Caygle. “But lots of wiggle room there, I’d say.”

The race to succeed Pelosi may be wide open, but it’s clear who would, and would not, be in the mix. House Majority Leader Steny Hoyer and Whip Jim Clyburn are both over 80 years old and would likely struggle to attain support from a caucus eager for new blood. Jeffries, the 4th-ranking House Democrat, and newly elected Assistant House Speaker Katherine Clark would both be strong contenders, while the progressive wing may field its own candidate.