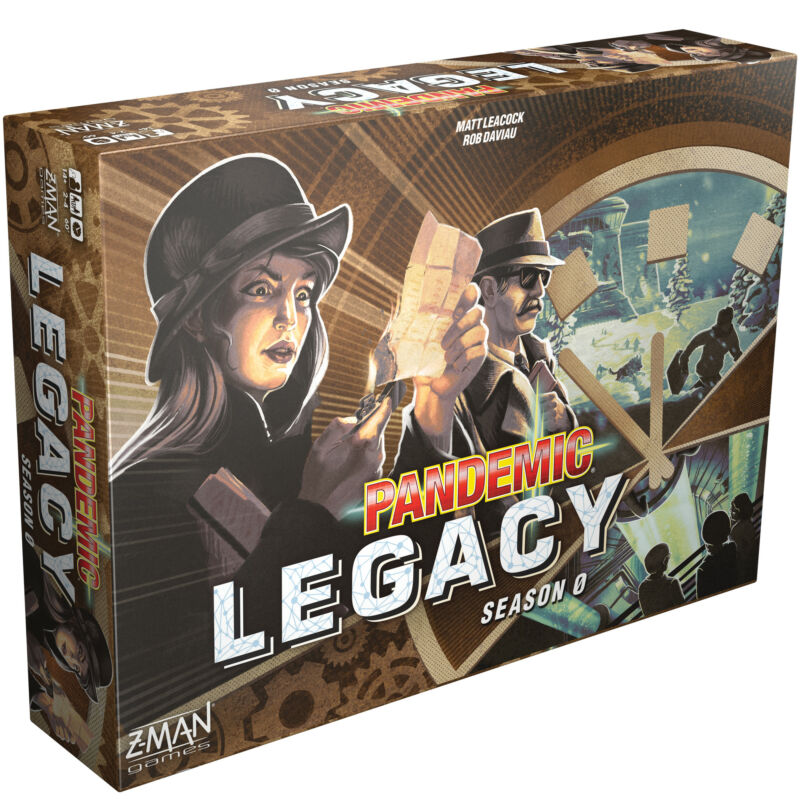 Enlarge
Welcome to Ars Cardboard, our weekend look at tabletop games! Check out our complete board gaming coverage at cardboard.arstechnica.com.

When Pandemic Legacy: Season 1 was released in 2015, it was met with a rave reaction from players. A campaign-based take on the original Pandemic, it dropped fans into the familiar role of medics battling to eradicate deadly viral strains before they spread around the globe and destroy humanity.

The game’s biggest draw was a storyline which unfolded over multiple play sessions, with diseases mutating and cities falling into chaos as a sinister conspiracy spread its tendrils across the world. Along the way, players put stickers on the board, destroyed cards, and opened sealed compartments to reveal hidden components, permanently changing the game in response to their own actions. A sequel, Pandemic Legacy: Season 2, took the action decades into the future, exploring a world wracked by the events of the first game. Now, there’s a third and final installment, taking players back to the dangerous days of 1962 and the height of simmering tensions between the United States and the Soviet Union.

Pandemic Legacy: Season 0 revolves around CIA agents tasked with uncovering plans for a powerful new bio-weapon being developed by rogue elements of the Soviet intelligence services. Where the established Pandemic formula saw players zipping from city to city to get rid of plastic cubes representing diseases, here you and your companions aim to clear the board of miniature plastic spies. Let them spread too freely, and they’ll overthrow the capitalist system. More importantly, they will hand you an embarrassing loss.

It’s mostly a superficial change, but it’s far from the only way that Season 0 evokes its Cold War atmosphere. Different locations on its board come with different alignments: Allied, Soviet, and neutral. As enemy agents, you won’t be able to fly freely into Soviet territory, and getting around these restrictions requires setting up teams of local agents, represented by plastic miniatures that look like VW vans. You’ll be able to dispatch them to do your dirty work, assassinating Soviet spooks with ruthless efficiency.

Your objectives for each playthrough also feel suitably CIA-esque. You’ll need to find the locations of enemy assets and infiltrate secret Soviet facilities. Best of all, though, are the high-stakes manhunt missions which see a target such as a defector or double agent start in one city and frantically make their way towards Soviet strongholds while you try to cut off all of their possible escape routes. It makes for a thrilling chase with some genuinely gut-wrenching moments where your quarry slips through your fingers just as you close in to grab them.

What really makes the game shine, though, is what happens between missions. As with previous games in the series, you’ll run through a deck of cards introducing dramatic new plot elements. You’ll add stickers to the board representing ever-tightening Soviet surveillance, making certain cities more dangerous to visit. But what’s most interesting is the ability to upgrade your characters over time. Each comes with a passport booklet with pages for three different identities, all with their own abilities. Over time you’ll add new powers, letting you fine-tune each agent for tasks like hunting down enemies, sharing information with teammates, or recruiting local operatives.

You’ll be able to switch between identities as you play to adapt to the changing situation on the board, and in an inspired touch the game lets you customize your characters’ appearance using layers of stickers. It has no effect on gameplay, but the idea of slapping on a wig and a false mustache to sneak behind the Iron Curtain is undeniably fun.

As you delve deeper into the campaign, the game ramps up its difficulty, and while it’s impossible to go into detail without giving away some important surprises, you can expect to deal with ever-intensifying Soviet schemes and pencil-pushing superiors who seem intent on getting in your way. What begins as a moderately more complicated version of Pandemic morphs into something far meatier and more demanding.

The incremental process of change means you never feel overwhelmed. There are some occasions, though, where it becomes clear midway through a session that you aren’t going to win, and it’s here that Season 0 feels flat, with players aimlessly wandering around the board chasing unobtainable objectives. It feels like going into the second half of a soccer match with your team losing 8-0, although in our campaign it only happened once.

Even when you lose, you’ll progress through the plot. This might mean missing out on some vital intelligence, however, and obtaining and interpreting information can be just as important as what actually occurs on the board. There are smuggled documents, secret plans, eyewitness testimonies, and other clues which you’ll aim to piece together to form a complete picture of what your adversaries are up to.

What might be most impressive, though, is the way the game digs into the interior conflict of its protagonists. There are multiple points throughout the campaign where players’ opinions on different issues have a direct, mechanical effect on the game. And while the plot runs largely on rails, there are a handful of key decisions which lead to a selection of different endings.

If there’s one narrative shortfall, it’s that Season 0 never really addresses the deeper question of whether the ends of all this shady spycraft justify the means. It’s not that the game presents a simplistic good-vs-evil view of the Cold War; its depiction of the CIA is far from heroic, and there are some terrible people on both sides. But the idea of vans prowling Latin America to bump off leftists is distinctly uncomfortable given the real-world history of CIA involvement in the region, even if you manage to assume that the people you’re wiping off the map are in fact secret agents in the pay of Moscow.

Spy fiction of all forms exists on a spectrum. On one side is escapist fantasy like James Bond, on the other are deeper stories exploring a world of mistrust and duplicity, and what happens when we allow people to step outside of legality and accepted norms. Season 0 falls mostly into the former category, and I would have liked to have seen how its blend of narrative and mechanical wizardry handled some deeper, more reflective issues.

Is this enough to negate everything that Pandemic Legacy: Season 0 does well? No. The game is a fitting culmination to a series which has given players a succession of tough decisions, hard-won victories, and agonizingly close defeats. For newcomers, Season 1 is a better place to start in terms of complexity and storyline. But if you’ve been along for the ride from the start, this is one hell of a send-off.

Aviva reinstates dividend for H1 as trading shows resilience in