When you get down to it, “shooting” in a video game is really just a way of projecting a directed line of intent from your character to another visible point on the map. This basic fact is a large part of why shooting a gun has become such a natural means of interacting with games from a first-person perspective. If your character is looking at something, shooting a gun lets you instantly and easily engage with whatever you’re looking at.

There’s one other major real-life action where this simple point-and-shoot mechanic applies: photography. Nintendo was among the first game-makers to realize this over 20 years ago, creating Pokémon Snap for the Nintendo 64 as a new type of first-person “shooter” (it doesn’t hurt that cameras fit much better than guns with Pokémon’s family-friendly branding). In the years since, though, only a handful of games have taken Nintendo’s lead and replaced “shoot a gun” with “shoot a photo” as the main verb.

So it’s down to Nintendo to revive and expand its own good idea with the awkwardly titled New Pokémon Snap for the Switch. Though the update can get a bit repetitive and tedious at times, this secret-packed photo safari is a great mix of chill moments and competitive personal striving for the best shots. 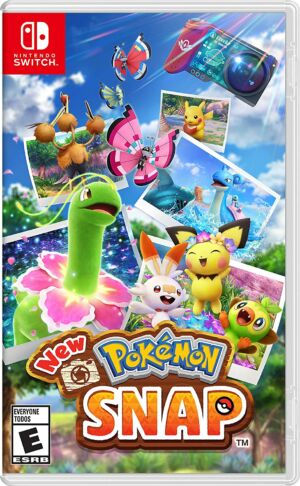 
$60 at Amazon
(Ars Technica may earn compensation for sales from links on this post through affiliate programs.)

If we’re comparing New Pokémon Snap to gun-based shooters, it bears less resemblance to a Call of Duty and more resemblance to an arcade light-gun shooter like House of the Dead or Time Crisis. That’s because the game, like its N64 predecessor, limits your movement to a preset path, automatically pushing you forward as you tilt and zoom your camera to try to get the best shots (the descriptor “rail shooter” is popular enough to have colonized Wikipedia).

To be fair, you do unlock a few subtle ways to change things up as New Pokémon Snap progresses. You can eventually revisit each course during the night, for instance, completely changing which pokémon are present and how they might act in front of you. You can also earn your way to higher “research levels” for each course, introducing further slight variations on the available fauna. Some courses also have branching paths, letting you see new parts of the level if you trigger a preset marker.

Still, the game’s strict on-rails design can be frustrating, especially if you’re accustomed to open-world shooters that let you explore every last nook and cranny. Pokémon will sometimes remain stubbornly far away or keep their backs turned to you, creating awkward shots that would be easy to fix if you could just take a few steps to the side. Being on rails is also frustrating if you miss a carefully planned shot, forcing you to restart the entire course from the beginning and wait to get back to that same position before trying again.

The slow-paced way the game unlocks new tools and areas seems designed to encourage these kinds of repetitive runs through its largely linear environments. This feeling is exacerbated by the limited methods for filling up your in-game Photodex of Pokémon (a photographic version of the usual Pokédex).

Getting a full Photodex requires finding at least four different photos of each monster that ranks at each level from one to four stars. This ranking process can be inscrutable, but photos of rarer poses and actions by the pokémon generally earn better star rankings. The star rankings are made even more confusing because each photo also gets a bronze-to-gold color rating as well as an individual score rating based on factors like size, centering, and the presence of other pokémon in the photo.

In any case, at the end of each run you can only choose one photo per monster to submit to the professor for final evaluation and addition to your Photodex. Even if you snap dozens of photos at every star ranking in a single run, in the end you’ll have to throw most of them out and give the course another go to capture another pose for the Photodex (you can save unused pictures in a more permanent photo album, though, just for posterity and in-game online sharing).

Getting into the groove

At first, this structure seems like a deliberate obstruction meant to slow New Pokémon Snap down and pad it with fake replayability. After a while, though, I began to give in to the chill monotony of playing through each course again and again. Instead of rushing to get as many pictures as possible in each run, I could focus on the careful observation of each pokémon I spotted on each path through a stage, and in each run, I could figure out how to coax it into a new pose or photogenic positioning.

The game slowly unlocks three main ways to interact with the world besides just snapping photos. There’s fluffruit, a light apple-like snack you can throw to briefly distract monsters. There are Illumina balls, which can light up special lantern-like plants or the monsters themselves. And there’s a flute that plays a short ditty that can sometimes get monsters to dance in place briefly.

Figuring out how to use these tools to get the best shots introduces an effective puzzle element to what would otherwise be dull and repetitive trips. Throwing a fluffruit might lure a fish out of its hiding place, for instance, which then encourages a flying pokémon to swoop down and grab fluffruit out of the water, creating an amazing shot (if your shutter finger is quick enough to grab it). Another fluffruit could lure a ground Pokémon into a swirling sand tornado for an amazing midair shot. Or playing a flute at just the right time can get a Pokémon to pause just long enough for your automated car to swing around and get the perfect angle on a happy, dancing monster.

New Pokémon Snap is full of these and other kinds of secrets that take multiple trips and educated guesses to unlock. This is where the genius of the game’s on-rails design comes in. Because NPS generally knows where you are and where you’re going, it can time out semi-scripted events and behaviors for the Pokémon in each area. Going through those planned scenes multiple times encourages you to experiment and pay attention to small changes on each new run, in order to figure out how to change things just enough to lure out a reluctant Pokémon or get a great new shot. The game also embeds a subtle hint system via an in-vehicle scanner and specific photo requests made by your fellow researchers.

Come on and safari with me

How appealing all this is probably depends on how appealing you find the Pokémon themselves. Watching the cute little beasts cavort and react to your actions in lovingly detailed HD is a large part of the bill of goods being sold here (though some monsters develop very jagged edges during zoomed-in photos). If your heart doesn’t melt just a little seeing a Pichu frolicking through a field with a Grookéy, you’re probably not going to get much out of this game.

But NPS can still be enjoyable for players who can’t tell a Pichu from a Grookéy. It’s the kind of game that provides a great excuse to grab your favorite legal intoxicant, throw on a podcast, and just chill out, snapping pics while cruising through some fun, lightly interactive environments (that prospect might sound even more appealing after a year trapped inside amid a global pandemic).

If you want to get competitive and compile all the best shots, NPS has multiple ranking systems (and the ability to upload shots online for digital kudos from strangers). After a while, though, going through an entire new run just to get an incremental score improvement on a previous photo begins to reach the point of diminishing returns.

Still, after 15 hours snapping thousands of photos of hundreds of distinct Pokémon, I feel like there are plenty of secrets left to be uncovered in New Pokémon Snap‘s varied environments. What’s more, I’m eager to uncover them in quick, five or 10-minute safaris whenever I happen to have a Switch handy.

Verdict: Buy it if the idea of taking photos of cute animals has any appeal to you at all.