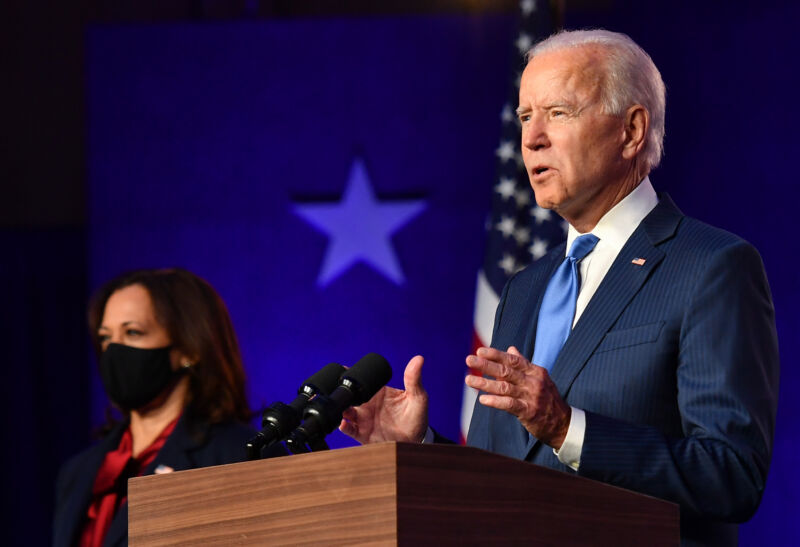 As President-elect Joe Biden celebrates reports of his victory in a historic election, his incoming administration is facing the daunting task of getting the raging coronavirus pandemic under control—and so far, his team is wasting no time in laying ground work.

“We’re not waiting to get the work done,” Biden said in a speech on Friday night. As Biden spoke, the national tally for the day’s new coronavirus cases smashed yet another record, the third in the row.

Daily new cases were over 125,500 on Friday, according to The COVID Tracking Project. The last peak in the pandemic in July saw daily case reports no higher than around 76,500. It’s unclear how high the current rise in cases will go. Public health experts expect the surge to worsen as cold weather drives more people indoors, where transmission risks increase, and people will be tempted to hold gatherings for upcoming holidays.

To try to turn things around as quickly as possible, Biden aides have already assembled a group of over 20 health policy and technology experts to advise the President-elect, focusing on vaccine development and distribution, health data collection, and supply chain issues, according to the New York Times.

Several of Biden’s health advisors told STAT News that in the next 10 weeks before the inauguration, they will be working to court skeptical mayors and governors, then select and vet leaders for key public health agencies, such as the Food and Drug Administration and the Centers for Disease Control and Prevention. They will also work to set a much-needed new tone on the pandemic response and mitigation efforts, including physical distancing and proper use of masks.

“There are some things he’s going to do right off the bat,” Nicole Lurie, a Biden campaign adviser who served as the Obama administration’s top pandemic-preparedness official, told STAT. “He will reach out to Tony Fauci. He will declare his intent to be an active participant in the [World Health Organization] and in the world. And I believe that in very short order, he’ll be in touch with governors and mayors around the country, listening to what it is that they’ll need to pivot this response.”

According to reporting by Axios, Biden is also planning to name a 12-member task force to advise the federal pandemic response on Monday. The announcement will come before even cabinet members and White House staff are selected, reinforcing Biden’s commitment to make addressing the health crisis a top priority.

Meanwhile, the Trump Administration is struggling with yet another rash of coronavirus infections inside the White House. News broke late Friday that six White House staff members, including Trump’s chief of staff, Mark Meadows, have tested positive for COVID-19. This is at least the third time the pandemic virus has swept through the White House, including an outbreak in late September and early October that infected Trump himself along with dozens of others.

The administration has repeatedly been lackadaisical about mask wearing and physical distancing. Last week, Trump threatened to fire top infectious disease expert Anthony Fauci while falsely suggesting the pandemic was under control. Trump had previously called Fauci and other public health experts “idiots.”

Meadows reportedly told staff he had tested positive on Wednesday, the day after Trump hosted a gathering of hundreds of people—many not wearing masks—at the White House to watch election results. The gathering violated District of Columbia’s coronavirus guidance. The city currently prohibits indoor mass gatherings of more than 50 people.

The latest batch of cases in the White House is “emblematic of the national failure to control COVID,” Tom Frieden, who served as the director of the Centers for Disease Control and Prevention under President Barack Obama, told the New York Times.