The online brokerage industry might be hard pressed to outdo the record-breaking year it experienced in 2020, but for now, few are betting against it.

“You have this incredibly engaged customer,” said

Devin Ryan,
senior research analyst at JMP Securities. “It appears that the end-customer is actually logging into their account more than they were at the beginning of the pandemic.”

2020 will be known as the year that individual investors dove into financial markets and doubled down, even in the midst of a global pandemic, strapping in for a roller-coaster ride that sent stocks plummeting—and then skyrocketing—in record time.

Driving the interest was a combination of factors that started with an industrywide shift to commission-free trading in 2019 but swelled as market volatility grew. As the coronavirus rolled across the U.S., millions of new investors found themselves stuck at home, some with extra time on their hands to learn about the markets. Others, unable to bet on sports or visit casinos, found the stock market’s outsize swings presented the perfect outlet to make bets.

In some cases, those wagers became a part of investing sensations, owing to the countless online forums where traders gathered to swap ideas. Similar to the online chat rooms that surrounded the late-1990s dot-com bubble, social-media sites such as
Facebook,
TikTok and the messaging platform Discord became hubs to talk up trades, sometimes helping send shares of companies on a wild ride.

What does 2021 hold in store for individual investors? Join the conversation below.

Some investors, including prominent figures such as

For a while, as stocks zoomed higher, the mantra seemed to hold up. Three months after markets bottomed in March, shares of companies from
Moderna Inc.
to
Tesla Inc.
to
Peloton Interactive Inc.
had all jumped 130% or more. Individual investors piled into those stocks while snatching up shares of smaller companies, too. Perhaps most notoriously, they sent shares of companies including
Hertz Global Holdings Inc.
and
Chesapeake Energy Corp.
soaring, despite the financial crises the companies faced. The companies, both of which filed for bankruptcy protection, were ultimately delisted from the New York Stock Exchange. 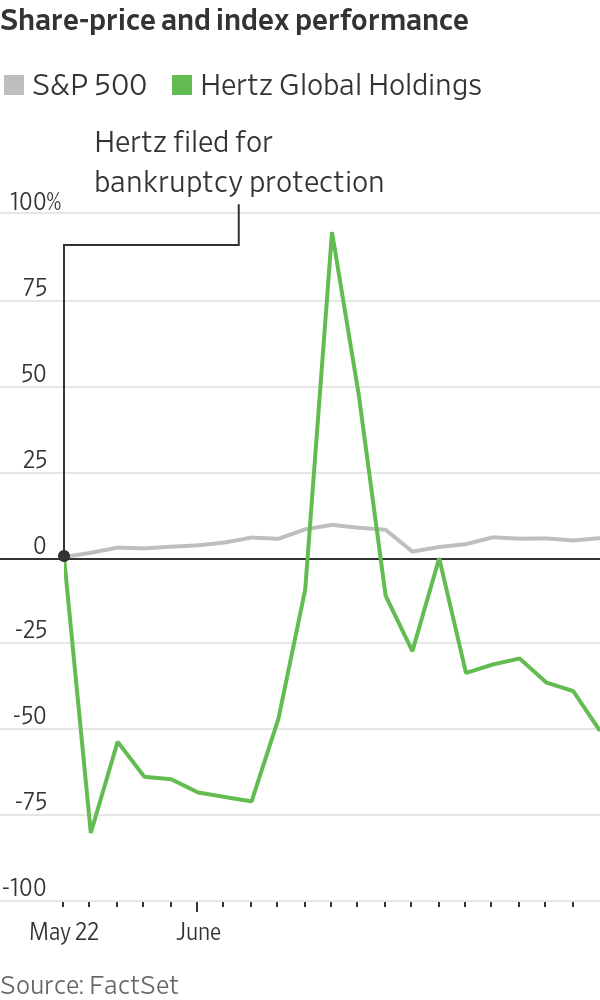 On peak trading days in 2020, individual traders are estimated to have accounted for nearly 25% of U.S. trading activity, Citadel Securities estimates. Overall, their share of total trading volume doubled to an average of 20% from 10% in 2019, Citadel said.

Analysts say individual traders likely make their biggest impact in driving share prices of smaller or less-popular companies, though they remain robust buyers of the same mega-cap technology companies and other stocks that institutional investors own. Webull Financial LLC said Tesla and
Apple Inc.
were the most popular stocks on its trading platform in 2020. TD Ameritrade pointed to
Amazon.com Inc.
and
Paypal Holdings Inc.
as among the most heavily purchased companies during November.

Retail platforms—Robinhood, in particular—have become the subject of increasing scrutiny. In December, Massachusetts regulators filed a complaint against the company, saying it failed to protect users’ assets and encouraged inexperienced customers to make risky trades. Robinhood, which disputes the allegations, says it has added safeguard for options trading, which is generally considered to be a more complicated—and at times riskier—strategy. It also maintains that only 13% of users who traded in any given month in 2020 made an options bet.

“We see evidence that many of our customers are classic ‘buy and hold’ investors,” said

Robinhood in May said that the number of users of its platform had reached more than 13 million. Analysts believe that number is now higher. The app popularized free trading, thanks, in part, to its mobile-first, easy-to-use platform and the promise of free stocks when signing up or referring friends to join. 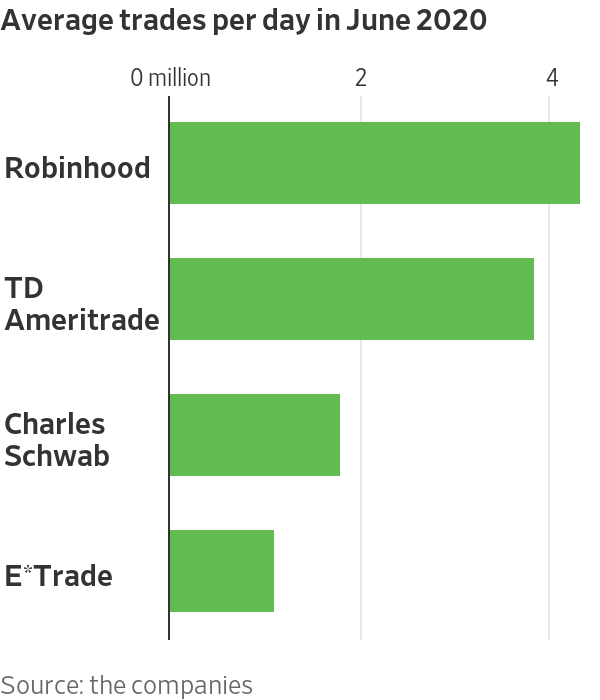 Although a debate about the risks and rewards that online brokerages enable is likely to continue, few analysts or financial advisers argue that enticing people to begin investing earlier is a bad thing. Studies have repeatedly shown that investing early can lead to bigger gains later in life. The recent introduction by online brokerages of tools such as fractional investing—or the ability to buy just a portion of a share—has made trading big-name companies more accessible, too.

Analysts are expecting that many of the features that attracted individual investors to trading in 2020 will continue, even though many predict 2021 won’t bring the same levels of volatility.

This year “created a new generation of investors that are seeking more,” Mr. Ryan of JMP Securities said. “They want tools, they want education, they want to do more.”

Mr. Ryan noted that significant growth opportunities for brokerages are possible, especially if they continue to expand their product offerings. The ability to capture investors’ wallets while they are young, and then work to become the main financial relationship in their lives via trading, banking, wealth management and other services offers some firms significant potential, he said.

“If you think about the customer today, I think there’s a lot of attention on their small accounts,” he said. “But these are small accounts today that in 20 years could be very large accounts.”

Write to Caitlin McCabe at caitlin.mccabe@wsj.com

How The New York Knicks Could Win The 2021 NBA